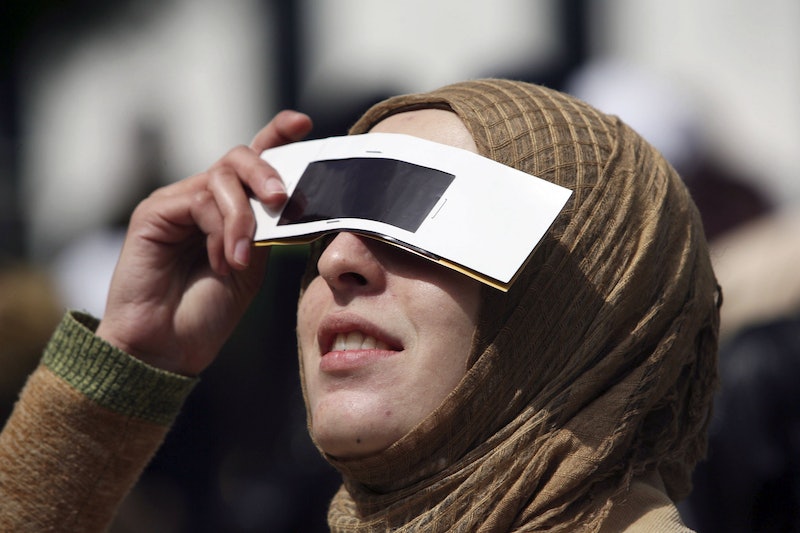 On August 21, millions of Americans will get to witness one of the most highly anticipated cosmic events to grace our skies in decades. In fact, a total solar eclipse hasn’t hit the U.S. since 1979, and only a handful of Pacific Northwestern states got to see that one. A coast-to-coast total eclipse, on the other hand, hasn’t happened in this country since right before World War I ended in 1918. Reasonably, Americans are super pumped about all of this. Here’s the thing, though: total solar eclipses can be a little risky. So if you’re going to be in the United States when the total eclipse hits, we need to talk about the things you definitely shouldn’t do during a solar eclipse.

More than anything, I can’t stress enough the importance of protecting your eyes during a total solar eclipse; looking directly at the sun during a solar eclipse can blind you in a matter of seconds. That’s just one facet of eclipse-viewing safety, though. Solar eclipses bring a slough of driving dangers that motorists don’t normally have to deal with, and wildlife will probably be acting weird all day as well. So before Monday gets here, read up on the things you definitely shouldn’t do during a solar eclipse.

Don't Look At The Eclipse Without Special Glasses OK, let me make this abundantly clear: Plain old sunglasses will not protect your peepers from the burning realness that is a solar eclipse. Also, while trustworthy sites have recently reported on how to make your own DIY solar eclipse glasses, relying on those isn't risk-free.

If you want to be 100 percent sure that your eyes won't suffer damage during a solar eclipse, your safest option is to splurge on a pair of solar eclipse glasses. Just be extra careful about where you decide to purchase, because Amazon actually had to recall some solar eclipse glasses that turned out to be counterfeit. Also, be sure to double check that the glasses you buy have solar filters and a visible ISO 12312-2 certification.

Don't Look At The Sun Through Binoculars Or Telescopes

Don't Keep Your Glasses On During Totality

When totality occurs, day will literally turn to night for about two minutes. If you keep your solar eclipse glasses on during that brief window, you're going to miss out on the magical moment everyone's been freaking out about for months. So if you're lucky enough to be in the path of totality on August 21st, take your protective eyewear off when total darkness hits. Just remember that, as soon as totality passes, you need to immediately look away and put your special glasses back on.

Personally, I love pictures. Photos help us remember everything from our grandest adventures to our smallest moments, and flipping (or scrolling) through old photos can literally boost your mood. But unless you're a professional photographer who's actually equipped and trained to shoot a total eclipse, then you probably shouldn't "do it for the 'gram" this time.

The thing is, trying to capture a total eclipse on a smartphone isn't going to work. As Ken Sklute, an eclipse photography expert from Canon told Today earlier this week, "Pointing the phone at the sun would simply yield a small but brilliant blob since smartphone camera sensors tend to overexpose anything bright to begin with." On top of that, you could damage your phone (and your eyes) in the process. The United States is scheduled to see another total eclipse in 2024, anyway, so it just makes sense to enjoy the experience instead of stressing over photos.

If there's any way you can avoid driving during a solar eclipse, then you definitely should. State transportation officials across the eclipse's totality path have already put out traffic advisories and weight limits for oversized truck loads. In fact, Oregon's transportation department is so concerned about the driving conditions during the total eclipse that they're, "treating the eclipse as a major event [and] emergency," according to Time. The U.S. Department of Transportation is also worried, because they expect this eclipse will be one of the largest driver distractions in years. On top of that, if you're driving in the eclipse's path of totality, it's going to be exponentially more difficult to see any pedestrians, construction workers, animals, and/or other vehicles that might be in your path.

Emergencies do happen, though. So if you absolutely must drive during the eclipse, turn on your high beams, and follow this advice from the Federal Highway Administration:

"FHWA urges drivers to not pull over at unsafe locations, such as stopping on an interstate at the last minute from which to view the eclipse. We also encourage drivers to be mindful of pedestrians and cyclists, who may also be looking skyward."

Please and thank you.

It makes sense to think you should keep your eyes glued to the skies during a total eclipse. I mean, that's where this whole thing is going down, after all. But if you're only looking upward during totality, then you're going to miss out on all the awesome stuff happening on land — because solar eclipses alter our surroundings in peculiar ways, and they do it fast. As psychologist Kate Russo put it for Today, "There are changes in the environment, the temperature has dropped, the wind has picked up, the light is really wrong and then that approaching shadow is just so wrong and exciting and euphoric."

On the off chance that you don't feel any different during a total eclipse, that doesn't mean the animals you're with won't start acting goofy. Your pets will probably think it's bedtime (you should try to keep them indoors for this, BTW), spiders might start taking down their webs, chickens will probably return to their coops, and bugs may chirp. In some cases, solar eclipses have distressed animals for days afterward.

Basically, sh*t's about to get weird for all of us — but in a good way. So while you should absolutely look to the sky if you're lucky enough to be in the totality path, you should also take time to observe how the eclipse might affect life around you.