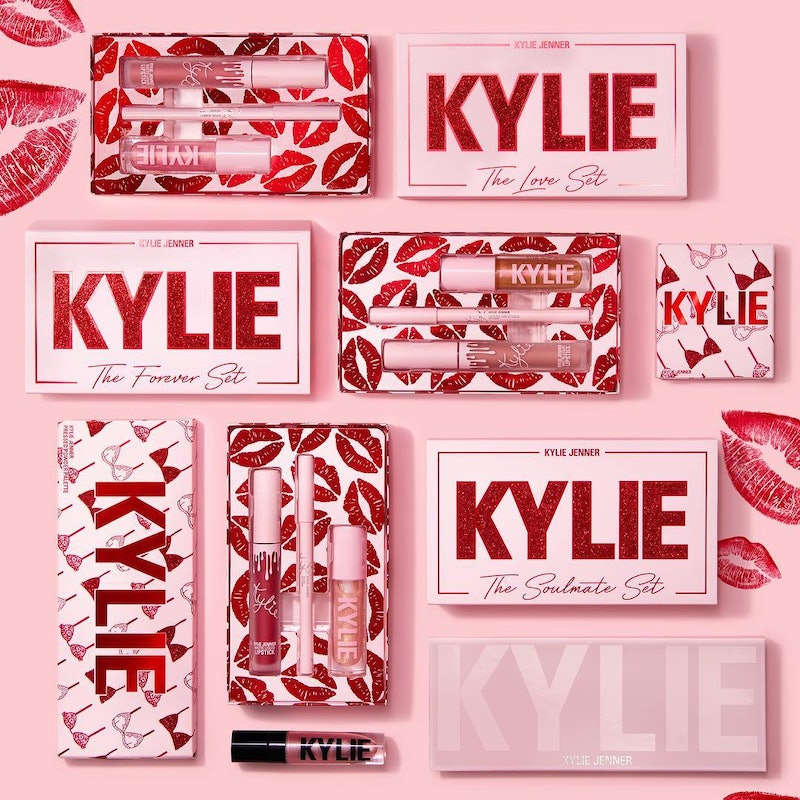 In case you didn't hear (which seems highly unlikely), Taylor Swift, Kim Kardashian, and Kanye West were once in a feud. However, that all seems to be over now, and Kylie Jenner may just be the one to solidify it. Kylie Cosmetics' Valentine's Day Collection may reference Taylor Swift in an attempt to put all those rumors about issues between the family and the singer to rest. There are some serious coincidences that have people thinking Swift may have served as some inspo for the brand's new products.

On Thursday, Jenner took to her Instagram account to unveil her new Kylie Cosmetics' Valentine's Day Collection. She'd teased it earlier in the week, but it's officially on the internet now. The kit features a brand new eyeshadow palette, a new glitter eyeshadow, a new blush, and three different lip sets: Forever, Soulmate, and Love. It's the lip sets that have people drawing comparisons to Swift.

According to Page Six, the names of the lippies in the Forever set are what's making some people think of Jenner's sister's former nemesis. Inside the bundle, Jenner fans will find a lip gloss named Story of Us and a lip liner called Forever and Always. Both of those names are the same as two Swift songs.

Jenner has not commented on this seeming coincidence, but Twitter is certainly convinced that the beauty mogul may have, in fact, created the names on purpose. In multiple tweets that have used screenshots of Jenner's reveal of the lip kit, users are drawing the connection, and some are even making jokes about Swift coming to sue Jenner for the names.

Of course, this could all just be a coincidence. After all, phrases like the story of us and forever and always aren't exactly new, especially given that they're in Jenner's Valentine's Day Collection.

This, however, won't be the first time a member of the Kardashian-Jenner family has gotten tangled into a Taylor Swift-related mess. Last year, Jenner's older sister Kim Kardashian launched her Kimoji heart fragrances for Valentine's Day. The heart-shaped perfumes were super cute for the holiday, and of course, Kardashian sent them out in PR.

The notable part? Who was on the PR list. In a video posted to her Snapchat, Kim explained that she was sending out samples of her product to, "my lovers, to my haters, to everyone that I think of because it's Valentine's Day, after all." A name on the list among several other names prone to feud with Kardashian? Taylor Swift.

Nothing ever became of Kardashian's gift to Swift, and maybe nothing will come of Jenner potentially name her lip products after Swift songs either. Whether you believe the names are just a funny accident or are a message that the feud between the family and Swift is officially over (which Kardashian has already said), the coincidence is still pretty funny given the Kardashians' history with Swift. Honestly, though, is there any better way to bury the hatchet than with lipsticks? Probably not.