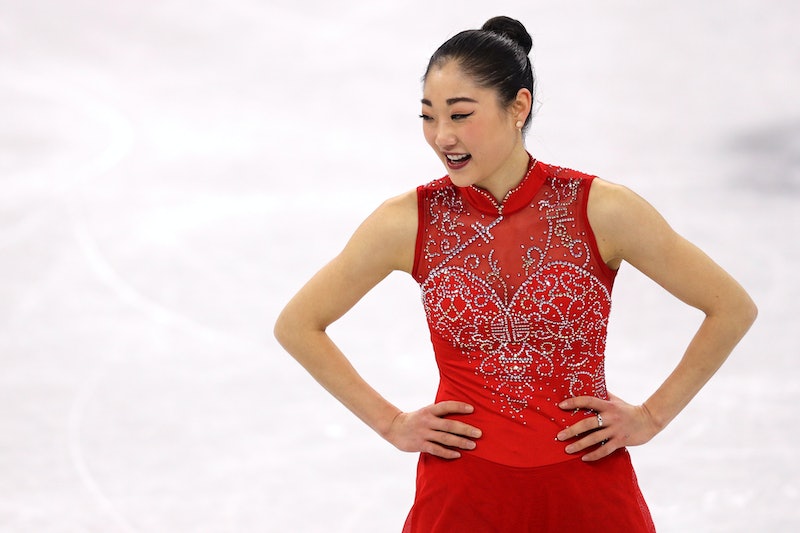 Even if you're a die hard Mirai Nagasu fan, no one could have predicted that watching the figure skater grace the ice on Feb. 11 would be witnessing history in the making. Her 2018 Winter Olympics performance would leave viewers wondering does Mirai Nagasu have a leg tattoo, a mystery that would make her the first female skater to sport ink on the ice if that proved to be true.

Suspected body art aside, Nagasu's routine in PyeongChang was legendary. As the first American woman to land a triple axel at an Olympics, Nagasu solidified her place as a team USA star. But as she helped lead the U.S. to a bronze medal victory, the Twitterverse couldn't help but wonder what was the mysterious stain on her inner thigh.

This wasn't the first time Nagasu sparked controversy with the U.S. Olympic team. Having previously been left off of the U.S. roster in 2010 in favor of Ashley Wagner, Nagasu had Olympic games fans questioning the reasoning behind favoring one athlete over the other. But this year's possible tattoo debacle would set Twitter fingers in motion like never before.

If the Twitterverse wasn't praising Nagasu's performance, tweets were zeroed on what appeared to be a tat showing the skater's dedication to team USA. As she leaped, twirled, and glided across the ice, it was difficult to determine what was peaking out from underneath her leotard. But one thing was for sure: It was obvious something was there, even with the skater blurred from rapid motion.

Still shots of the skater didn't make the mystery an easier to solve. It seemed that U.S. initials were inked in bold letters against a black banner. Many Twitter users were convinced Nagasu had dabbled in body modification.

Proving they were here for what they believed to be an edgier side of Nagasu, many fans were pro-thigh tat.

Regardless of whether it was really a tat or not, this was going to be one serious debate.

Quick to dismiss the idea of a huge thigh tattoo, some argued the lettering was printed onto her tights.

There were even talks of the mystery mark being a gigantic bruise.

Despite having a beautiful and historic performance, viewers couldn't help but fixate on Nagasu's inner thigh.

So, what the heck was the odd mark that had Twitter so divided?

As it turns out, it's none other than Kinesiology Tape, also known as KT Tape — and some fans knew it all along. According to the manufacturer's website, it's a therapeutic, elastic sports tape "designed to relieve pain while supporting muscles, tendons, and ligaments".

As the over-use of a particular area of the body causes injury, lymphatic fluid builds up and causes inflammation and swelling, KT Tape's website explains. The tape aims to lift the skin, thus allowing lymphatic fluid to circulate white blood cells throughout the body to eliminate waste products, cellular debris, and bacteria.

Nagasu was simply wearing custom U.S. KT Tape, representing her team while alleviating pressure and pain during her rigorous routine.

If it's hard to believe Nagasu's thigh was covered with an athletic aid rather than a tat, KT Tape's tweet cleared things up once and for all.

Responding to a tweet that pointed out the skater was wearing the pro tape, Nagasu also confirmed this to be true, joking with her followers.

The confirmation had some Twitter users wondering if the KT Tape gave her an advantage with nailing such a difficult move.

Tat talks or not, it was such a memorable moment from the figure skating competition, not to mention a triumph for both Nagasu and Team USA.

As one of three women to ever nail a triple axel at the Olympics, the 24-year-old, California native will certainly be remembered, even if her inspirational moment will conjure memories of the time Nagasu had everyone fooled that her inner thigh was home to the hugest USA tat.