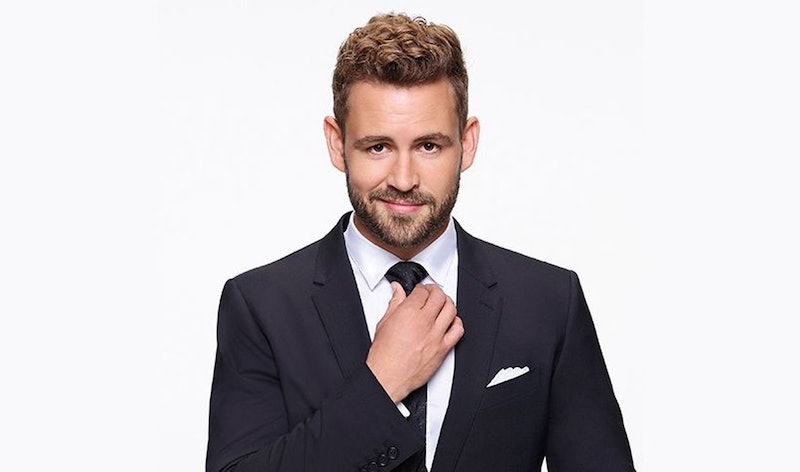 As a four-time participant of Bachelor Nation, Nick Viall was an unorthodox choice for The Bachelor's leading man, and his capital J Journey to find love hasn't been any more conventional. He's sent home several women he seemingly really liked — often before the rose ceremony — and has vocally doubted the idea that the process will even work for him. Is it possible, then, that his fairytale ending could also take a non-traditional route? It's time we finally address the question that's been on everyone's mind: Does Nick actually propose on The Bachelor?

There, of course, isn't a concrete answer just yet. (Come on guys, did you really think I'd spoil the finale?) But, based on history, it's a very real possibility. Season 11 Bachelor Brad Womack famously chose neither of the final two women, and, though Season 18 Bachelor Juan Pablo did decide to pursue a relationship with Nikki Ferrell, he didn't propose.

Nick himself has also proven that he's not the kind of guy to pop the question just because that's what's expected of him. When he appeared on Bachelor In Paradise, he broke up with Jen Saviano instead of getting engaged, and, when Andi Dorfman — who dumped him during Bachelorette Season 10 — showed up to talk in Nick's Week 9 episode, he told her firmly that he had no plans to propose just because he was the Bachelor and there was only one woman left standing.

So, we know that Nick isn't opposed to leaving The Bachelor as a single man, but that doesn't mean he will. He decided to stick it out even after his minor breakdown in Week 7, and he's been clear about sending women home as soon as he no longer sees a future, so the fact that Raven and Vanessa are still in the running seems hopeful. He also admits he's in love with both women in the finale episode's promo, so it's unlikely that he'd walk away from that. Still, he could certainly follow in Juan Pablo's footsteps and opt to explore a relationship outside of the Bachelor bubble before getting down on one knee (which, if I'm being honest, is probably the wisest choice).

As for any clues about what actually happens, the only major evidence is that Nick will be on Dancing With the Stars, which means he definitely hasn't shipped off to Hoxie, Arkansas to be with Raven or Canada to be with Vanessa — at least for now. That doesn't rule out the possibility that one of them made the move to Los Angeles, but it doesn't help that Nick has been infuriatingly vague about his relationship status post-show.

He told E! News he was, "Possibly maybe with someone, possibly not," and insisted he could neither confirm or deny if he was engaged. On The Ellen DeGeneres Show, he said he was "maybe" in love, and during an interview on Bustle's Bachelor podcast Will You Accept This Podcast?, he simply said that the rest of the season is "unpredictable," he has "no regrets," and you'll probably cry. Yeah, real illuminating, Nick.

Judging by the sneak peek for "After the Final Rose," however, the biggest question may not even be whether or not Nick proposes, but if the contestant says yes. It won't be long until we finally know the answer, but here's to hoping Nick doesn't end up heartbroken yet again. I'm all for dramatic reality TV, but I'm not sure I'm prepared for a finale that devastating.