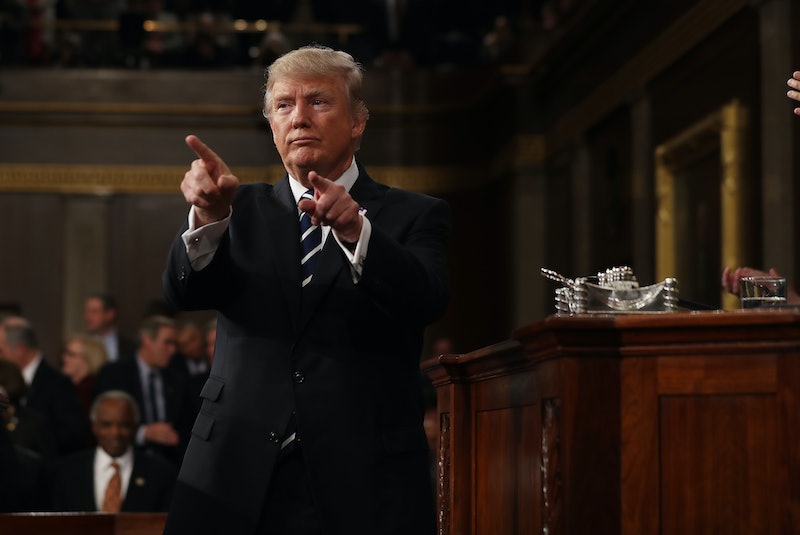 Before he became president, Donald Trump was known for firing people. On television, his decision to kick people to the curb came swiftly and with a dramatic point of the finger — but the decision usually stemmed from an individual's failure to complete a staged, reality-show challenge. In office, President Trump fires government officials very differently — and his motives might not be as easy to justify to an audience of the American public.

FBI Director James Comey had been back in the spotlight for the Clinton email scandal again recently, as he testified before the Senate last week; on Tuesday, Trump fired him. Trump's decision reportedly resulted from the recommendations of his attorney general and deputy attorney general, and was largely based on Comey's handling of the investigation into Hillary Clinton's use of a private email server. Back in July 2016, Comey announced that the FBI found no reason to prosecute Clinton. In a memo, Deputy Attorney General Rod Rosenstein found Comey "wrong" to recommend no charges for Clinton. Not to mention, Trump tweeted just days before firing Comey that the FBI director gave Clinton "a free pass."

Comey was investigating Trump's possible ties (or possible lack thereof) to Russia. Trump has repeatedly denied the controversial connection — and his letter to Comey on Tuesday made sure to awkwardly distance the firing from the Russia investigation.

To sum up the Comey situation, Trump reportedly fired Comey on Tuesday for refusing to recommend charges for Clinton (Trump's opponent). Coincidentally, Comey also may have been investigating something that could have potentially revealed Trump's alleged connections to Russia. That investigation will now fall under the domain of the next FBI leader, whom Trump will nominate.

As it turns out, this sort of problematic, grey-area firing has become a trend in the Trump administration. Back in March, for example, Trump fired U.S. Attorney Preet Bharara. Bharara was officially fired after refusing to step down at the attorney general's request. Conveniently, he had also been investigating Trump's health and human services secretary, Tom Price, and Trump's beloved Fox News at the time.

The investigation into Price reportedly looked at his trading of health care stocks while he was a member of the House of Representatives. For his part, Price maintained that he had done nothing wrong, according to The New York Post. Following Bharara's removal from office, it wasn't clear what the status of the investigation was.

Also, back in March, The Washington Post reported that the administration tried to block Yates from testifying on Trump's involvement with Russia and the Flynn appointment. (On Trump's side, White House Press Secretary Sean Spicer called the Post's report "100 percent false.") This week, though, Yates did testify before Congress, confirming that she warned the administration about Flynn. Ultimately, Flynn was fired for misleading Vice President Mike Pence about his relationship with Russia.

Again, to sum up: Comey, Bharara, and Yates each represent an instance where the president fired a federal official who was somehow going against him. Comey gave Clinton "a free pass," and may have revealed something damning about Trump's alleged involvement with Russia; Bharara was investigating a top Trump appointee and one of the few media outlets he hasn't called "fake news"; and Yates refused to enforce Trump's potentially illegal executive order and warned him against a particular appointee, even testifying to as much before Congress.

It's important to note that not all of these circumstances necessarily point to a causal relationship. In fact, Bharara was fired as dozens of U.S. attorneys were let go simultaneously. But even without a surefire cause-and-effect relationship, the trend remains troubling. In the Trump administration, it seems, it's relatively common to be fired if you somehow pose a challenge to the president. Even if he ultimately finds other reasons to attribute the dismissals to, the result is the same: You're fired.