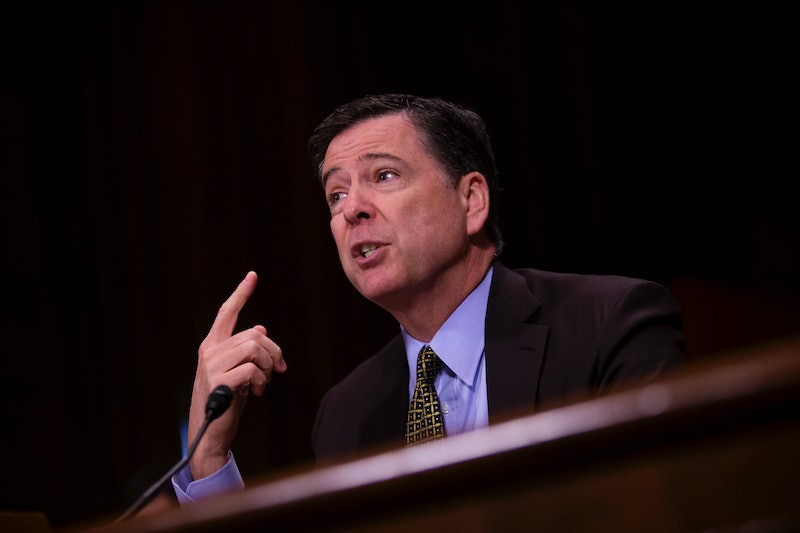 According to statements from the White House, FBI Director James Comey was "terminated and removed" from office Tuesday evening, based on recommendations from both Attorney General Jeff Sessions and Deputy Attorney General Rod Rosenstein. But why was Comey fired?

According to the letter and memorandum sent by Sessions and Rosenstein, Comey's removal was partially due to how he handled investigations into former Secretary of State Hillary Clinton's email server during the 2016 election. In particular, the documents cited his July 5 statement and October 28 letter to Congress regarding the investigation and "the example" his actions set for other Justice Department Officials.

In the memo addressed to Sessions, Rosenstein wrote:

The current FBI Director is an articulate and persuasive speaker about leadership and the immutable principles of the Department of Justice. He deserves our appreciation for his public service. As you and I have discussed, however, I cannot defend the Director's handling of the conclusion of the investigation of Secretary Clinton's emails, and I do not understand his refusal to accept the nearly universal judgement that he was mistaken. Almost everyone agrees that the Director made serious mistakes; it is one of the few issues that unites people of diverse perspectives.

Comey — who was also supervising an investigation (confirmed in late March) into whether there was any coordination between President Donald Trump's campaign and Russia during the election — was also criticized in the memo for "negatively affect[ing] public trust in both the justice department and the FBI" for his decision to hold press conferences and "publicizing non-public information."

Most recently, Comey testified to the Senate Judiciary Committee on FBI oversight six days ago. During his testimony, Comey famously said he was made "mildly nauseous" by the idea that his actions influenced the election. However, he also defended his investigation of Clinton and claimed that Clinton's top aide, Huma Abedin, forwarded "hundreds and thousands" of emails to her husband, Anthony Wiener, to "print out for her so she could then deliver them to the Secretary of State." (This claim was later debunked by ProPublica on Monday night).

Members of Clinton's campaign team began to comment on the firing via Twitter shortly after the news broke. Former Clinton campaign manager Robby Mook also tweeted that the situation was, to him, "Twilight zone."

Former vice presidential candidate Tim Kaine fired off a series of tweets expressing concern over the firing and the effects it might have on the Russian probe — noting that Sessions, who recommended Comey's dismissal, had recused himself from the investigations.

Despite the growing concern over what Comey's departure will mean for those investigations into the 2016 election, Trump wrote in his own letter to Comey that he "greatly appreciated" being informed "on three separate" occasions that he was "not under investigation." (Although, again, he is under investigation.)

So, uh, nothing to see here?