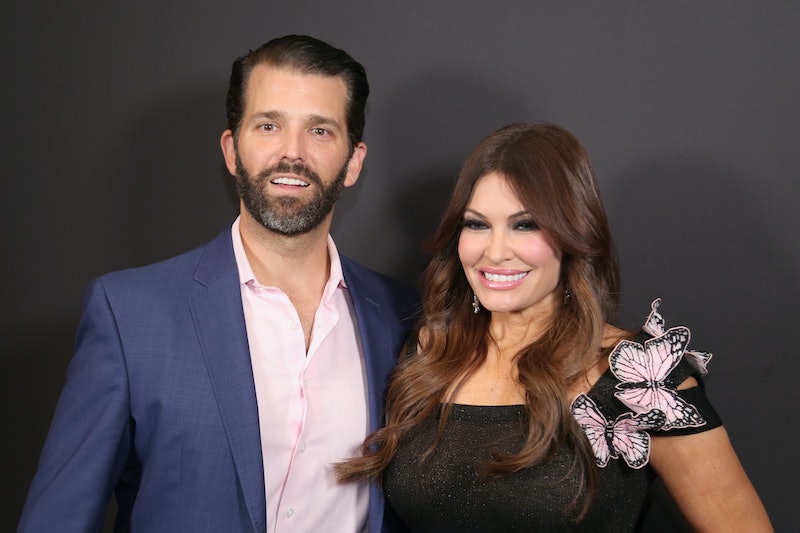 Donald Trump Jr. and Kim Guilfoyle have been dating for around a year, and if recent reports are accurate, they may soon be taking their relationship to the next level. According to the New York Post, Don Jr. and Guilfoyle are buying a house in the Hamptons, reportedly for $4.5 million.

The Post reports that the two are under a contract to purchase a 9,200 square foot compound in the Bridgehampton neighborhood, complete with access to a 25-acre kettle pond. Neither Don Jr. nor Guilfoyle has confirmed the reports, and Bustle has reached out to the Trump Organization for comment.

Rumors that the president's eldest son and the former Fox News host were dating began circling in May 2018, months after Don Jr.'s wife Vanessa filed for divorce. The two confirmed their relationship via an Instagram photo the following July.

According to the Post, Don Jr. was initially reluctant about moving to the new home, as he preferred living in Westchester. However, Guilfoyle reportedly told him that hunting is popular in the Hamptons, and Don Jr. agreed to move there — so long as they could add a room to the house in which to store his guns.

According to the Post, the house has a fireplace in the living room, a pool with a waterfall and spa, a games room, and a large eat-in chef's kitchen connected to a screened patio. It's in a section of town known as "south of the highway" that's within walking distance of a beach and local restaurants, the Post reports.

This won't be the first time Guilfoyle has bought a home in the Hamptons, according to the Daily Mail. She purchased a home in the Bridgehampton neighborhood in 2012 for $1 million before selling it three years later for $1.8 million, the Daily Mail reports. A source told the Post that Guilfoyle's "ex-in laws have a place here and she is still close with them." Guilfoyle has been married twice: Once to design firm CEO Eric Villency and once to San Francisco Democrat Gavin Newsom, who's currently serving as California's governor.

Don Jr. has five children from his last marriage, while Guilfoyle has one. The couple's new house will be big enough for all of them, as the Daily Mail reports that it has six en suite bedrooms plus a master bedroom. There's also a game room, according to the Daily Mail, and space outside to build tennis courts, should the couple wish to do so.

The source who spoke with the Post said that Don Jr.'s children are "happy to be summering in the Hamptons," in part because "they hated Westchester."