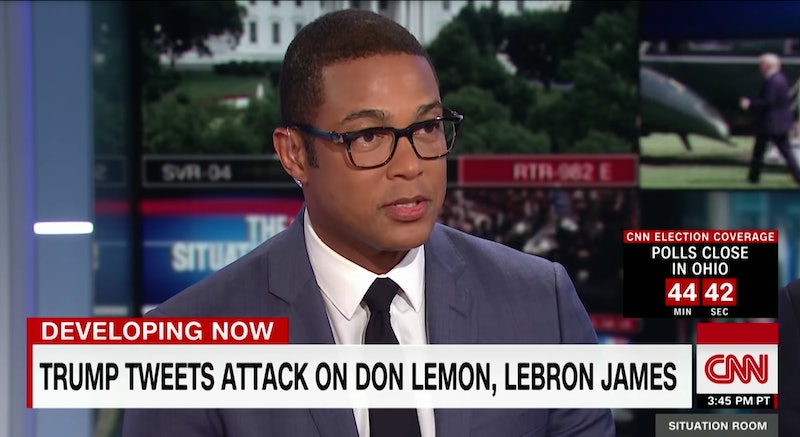 Much has been made of First Lady Melania Trump's split from her husband on LeBron James. But not everyone's completely buying it — specifically, Don Lemon, the other person President Donald Trump targeted in his attack. In an appearance on CNN's The Situation Room Tuesday, Don Lemon called out Melania as a "birther" and said you shouldn't "read too much into" her statement in support of James.

Lemon and several of his best-known CNN colleagues, like Dana Bash and Wolf Blitzer, discussed the incident at length on Tuesday. Last week, after James told Lemon on air that he wouldn't meet with Trump because he was using sports to be divisive, Trump took to Twitter to insult both Lemon and James' intelligence:

Lebron James was just interviewed by the dumbest man on television, Don Lemon. He made Lebron look smart, which isn’t easy to do. I like Mike!

The first lady's spokesperson then put out her own statement, saying that "It looks like LeBron James is working to do good things on behalf of our next generation."

After discussing what the president had said, on Tuesday night, Blitzer said he was "happy" that Melania came out with the statement in support of James' school. But Lemon wasn't really having it:

I think that's great that Melania Trump did that. I give her credit for that. I don't know if we should read too much into it because we also have to remember she was a birther, too.

According to Lemon, Saturday's Twitter attack is just one of the most recent racist statements the president has made, stemming back to when he openly questioned whether former President Barack Obama was born in the United States.

"I do believe that this president is a racist and I don’t say that lightly," Lemon said, explaining not just the tweet, but his ongoing behavior. "What he is playing on with me and LeBron James is an old racist trope about black and African-Americans and people of color being of inferior intelligence."

It's the first lady's active participation in one of Trump's earliest ploys, the birther conspiracy theory, that makes Lemon question her support of James, Lemon says.

Melania joined her husband in asking for Obama's birth certificate on The Joy Behar Show in April 2011. "It’s not only Donald who wants to see it," she said, about the birth certificate. "It’s American people who voted for him and who didn’t vote for him. They want to see that." At that point, Obama had already released his short-form birth certificate, and Melania argued it wasn't good enough.

During the segment, Lemon also shared what happened the first time he called out Trump for his birtherism. He said the then-reality TV star promised never to go on his show "because he said I was racist, because I challenged him on an in-factual statement, a lie."

Lemon made similar arguments on his own show on Monday. "This president traffics in racism and is fueled by bullying," Lemon said on CNN Tonight with Don Lemon. "Referring to African-Americans as dumb is one of the oldest canards of America’s racist past and present: that black people are of inferior intelligence."

And on Tuesday he called out not only the president, but the first lady, too.