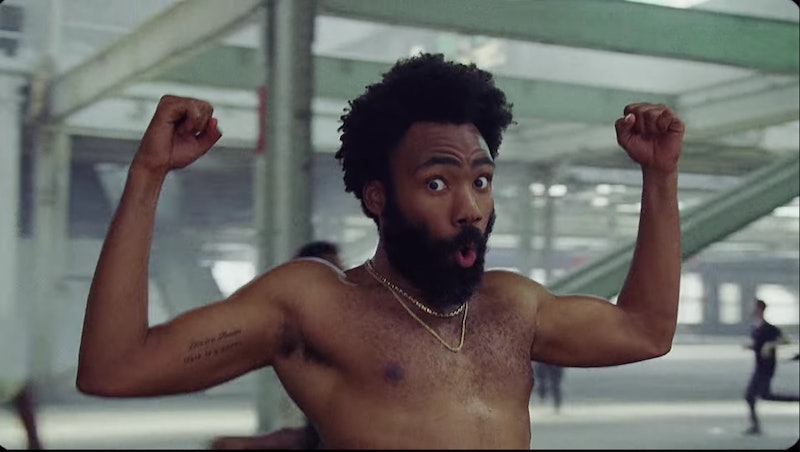 DonaldGloverVEVO/YouTube
By Nina Bradley
May 10, 2018

Donald Glover and his musically gifted alter-ego, Childish Gambino, brought the world to a near standstill with the debut of a new music video last Saturday night. In his first interview following the project's surprise release, Glover said he wants "This Is America" to be played on the 4th of July, making the symbolic message behind his shocking video even that much clearer.

During a red carpet appearance at the May 7 Met Gala, E! asked the multi-hyphenate entertainer what he hoped to accomplish with the visual. Pausing for a beat, Glover quickly stepped up to share: "I just wanted to make, you know, a good song and something that people could play on Fourth of July."

Following its release, which came on the on the heels of Glover's dual hosting and musical guest duties on the May 5 episode of Saturday Night Live, "This Is America" sparked major discussion on Twitter and was praised, by many, for its powerful messaging. The four-minute offering, which Deadline indicates was directed by Glover's Atlanta collaborator Hiro Murai, shares a daunting and powerful display of what it means to be black in America while also showcasing chilling commentary on everything from police brutality to the plague of gun violence and mass shootings in this country.

While those jaw-dropping themes play heavily in the background, they are all, somewhat, upstaged and ignored as Gambino literally dances around the truth of everything happening around him. Though the overall message of depicting America's problems is very clear, there are so many poignant elements to be absorbed that it's nearly impossible to take it all in during a single viewing.

Amongst its evident display, there were other underlying details from American history that many would were notice throughout. On Twitter, Dear White People creator Justin Simien pointed out that one of Gambino's poses was reminiscent of a Jim Crow stance. The striking moment comes amidst a scene in which Glover's character shoots and kills a man at the video's start.

The Jim Crow caricature, which was created by a white man in the early 1800s, was a derogatory character that was played by white people with painted blackfaces and designed to mock black people and segregation. It was used as a means of entertainment for white people during that time. Jim Crow laws, which enforced racial segregation within public facilities throughout territories of the former slave-holding Confederate States of America following the Civil War in the late 19th century, were upheld until 1965.

Twitter also took notice of the fact that the man who is murdered in the opening shot bears resemblance to Trayvon Martin's father, leading many on the social networking site to think it was him. While the two men do share similarities, the person featured in the video is actually musician and actor Calvin The Second.

The lyrics to "This Is America" allude to the notion that being black and completely innocent in the Unites States of America could still get you killed. Although, the video features the murder of innocent people without punishment or repercussions, irony steps in when Glover, in the end, finds himself running from the police for lighting a marijuana joint.

It's worth noting that the video has become one of Gambino's most popular video releases to date, pulling in over 50.4 million YouTube views since its release, according to Forbes. The outlet also reveals that per Nielsen, a whopping 12.9 million of those views came during the first 24 hours of its posting which has turned it into one of biggest music video debuts of 2018. Forbes also indicates that the video garnered over 950,000 views in one hour during its peak, and was the most viewed music video each day between May 6 to 8.

With the video and song continuing to make major waves on the internet, it seems that Childish Gambino is going to have a huge influence on what's being heard on the radio at this year's summer BBQs.