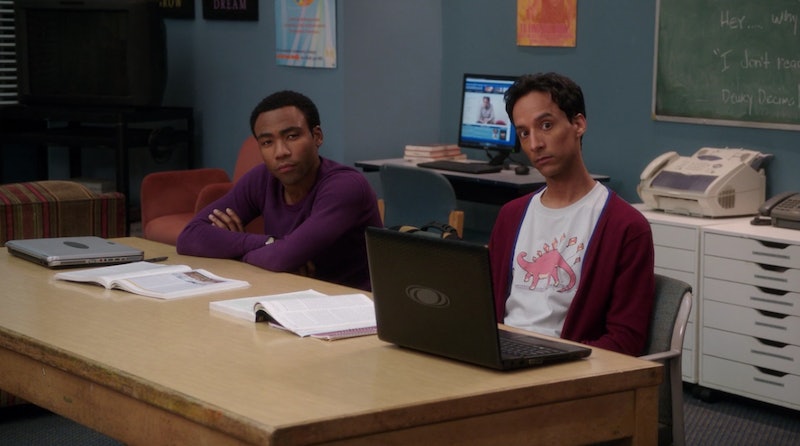 Cool. Cool, cool, cool: Donald Glover has a Community movie pitch that outlines the ultimate Troy and Abed odyssey. Glover reunited with his Community co-stars Joel McHale, Danny Pudi, Gillian Jacobs, Yvette Nicole Brown, Ken Jeong, Alison Brie, Jim Rash, and creator Dan Harmon for a virtual table read and Q&A on May 18 to benefit Frontline Foods and World Central Kitchen amid COVID-19. While the show’s “six seasons and a movie” prophecy is now up in the air due to the global health crisis (and the general absence of a script), Glover offered an idea about his character Troy’s fate post-venture out to sea with Star Trek actor LeVar Burton.

“In the Community world, he’s definitely dead,” Glover said when asked about where Troy would be now. After objections of his former co-stars, however, he offered a future less bleak for the co-host of Troy and Abed in the Morning: “What am I doing, am I writing the movie on the fly or something?” Outlining a plot more harrowing than the battle between Pillowtown and Blanketsburg, Glover then suggested a film where Troy’s best friend, Abed (Pudi), sets out to find him out at sea. “He’s probably lost. I feel like Abed’s got to find him,” Glover said. “I like those movies.”

For his part, Pudi was all for it, saying, “I love the idea of Troy being lost and Abed’s mission is to go find him, try to track someone down — that would be fun.” Harmon, jotting some notes down, agreed and added, “It writes itself. We’ll do some Die Hard references.”

Community re-entered the pop culture zeitgeist after Netflix added all six seasons of the sitcom to its library in April. Since then, much of the core cast has expressed an interest in reprising their roles for a movie. In an interview with TheWrap on May 8, Harmon teased that conversations are, in fact, happening for a film. In April, McHale touched on the possibility of a film and told Entertainment Tonight, “It's going to be hard to get a hold of Donald [Glover]... I know that he's the busiest person I know.” He added, “I know that Dan [Harmon] wants to do it and I know that he's got so much Rick and Morty to do as well, so I don't know when he's going to find the time. But I'd love to do it."

With Glover's movie pitch and Harmon taking notes, could a film about Abed’s sea odyssey to find Troy happen, after all? This is the alternate timeline Community fans have been hoping for.

More like this
At 28, Rosie Perez Risked Her Career To Stop Playing Stereotypes
By Gabrielle Bondi
Here’s Everything Coming To & Leaving Netflix In February
By Jake Viswanath
Adam Ali Hopes 'Waterloo Road' Will “Subvert” Queer Misconceptions
By Sam Ramsden
Theo James Would “Love” To Star In George Michael Biopic
By Sam Ramsden
Get Even More From Bustle — Sign Up For The Newsletter
From hair trends to relationship advice, our daily newsletter has everything you need to sound like a person who’s on TikTok, even if you aren’t.