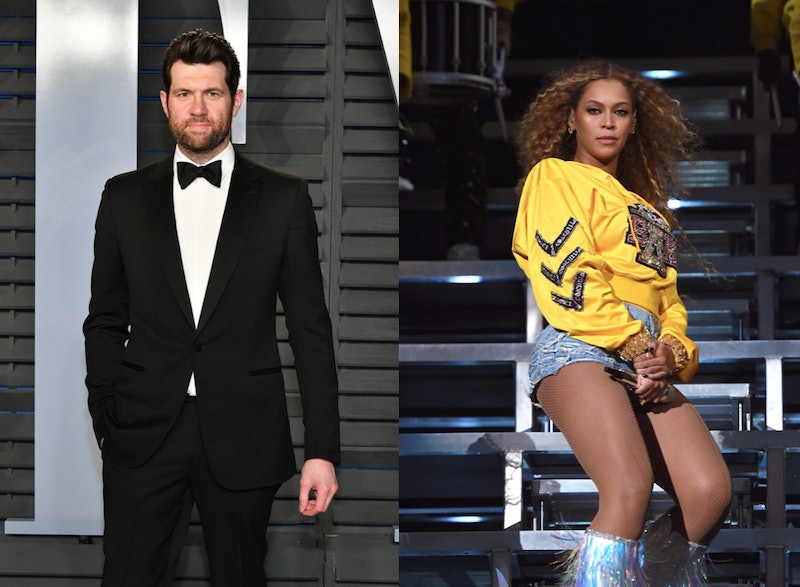 Simba isn't the only royal at Pride Rock worth bowing down to — after all, the live action Lion King also stars the Queen Bey herself. And, word is, she nailed it. In fact, Billy Eichner cried after hearing Beyoncé sing in The Lion King, something the comedian revealed in a recent interview.

During a recent episode of the Keep It podcast, which was released on Wednesday, March 27, Eichner dished about his role in the upcoming Disney reboot to co-hosts Ira Madison III and Louis Virtel. After Madison jokingly questioned whether or not Beyoncé would actually be in the film — after all, the character of Nala is conspicuously absent from all of the trailers — Eichner revealed that not only is Beyoncé in the movie, but she's fantastic in it. "She’s definitely in the movie because I’ve seen a rough cut. And I’ve heard her sing ‘Can You Feel the Love Tonight?’ with Donald Glover and I’m telling you, it’s f*cking good," Eichner explained about Nala and Simba's love song.

"And that was never my favorite song to be totally honest," the actor continued. "I liked it when Elton John sang it. I love Elton John." Eichner continued, trying his best not to delve into any spoilers: "I don’t want to give too much away about that, they’re very, they do not want us talking about it. I will just say that honestly, it made me cry and I was not expecting that."

While Eichner couldn't reveal much about the highly-anticipated Disney reboot, he did talk a little bit about what it was like playing Timon, the role made famous by Nathan Lane in the 1994 animated classic. "[Playing Timon is] shocking, it’s bizarre, it’s terrifying," Eichner explained. "You can’t really do it better than [Nathan Lane] did it, you can just do it your way."

And based on his hints about the project, it seems as if fans are in store for a totally different take on Timon and Pumbaa than the one in the original movie. "My energy with Seth Rogen [who plays warthog Pumbaa] is very different than what Nathan Lane and Ernie Sabella’s energy was," Eichner explained. "They were both coming out of [the] production of Guys and Dolls when they did the Lion King. ... They had this very vaudevillian, Broadway, musical theater, borscht belt style, which here and there, Seth and I borrow from but we don’t lean into that as much."

Another major difference between the live action Lion King and the original is the change in animation style, which is less of a traditional Disney cartoon, and much more high tech. "The style of animation that this movie is — it’s so much more, for lack of a better word, realistic," Eichner explained, adding that channeling Lane and Sabella's energy in this film, "wouldn't really match the animation."

"And so, that helped inform what we do too ad helped me create something that was distinct, I hope, from what Nathan did while also nodding to a little bit of what he did, which people loved," he continued.

Though Eichner only mentioned one of the film's iconic songs during his conversation on Keep It, back in February 2018, Elton John himself teased the possibility of a brand new song, written specifically for Beyoncé. According to The Sun, the legendary rockstar revealed that he was working with Queen Bey's team to write and record an original song for the live action Lion King.

"They need to have a new end credits song," John said at the time. "There’s going to be four of our songs in the film, from the original: 'Can You Feel The Love Tonight?' 'Hakuna Matata,' 'I Just Can’t Wait To Be King' and 'Circle of Life.' And then there will be an end, closing song, and we’ve been speaking to Beyonce’s people and hopefully Tim and I and her can cook up something."

Whether Beyoncé sings just one song, or multiple musical numbers, one thing is certain: members of the BeyHive should make sure to bring plenty of tissues with them to the theater when the live action Lion King is released.