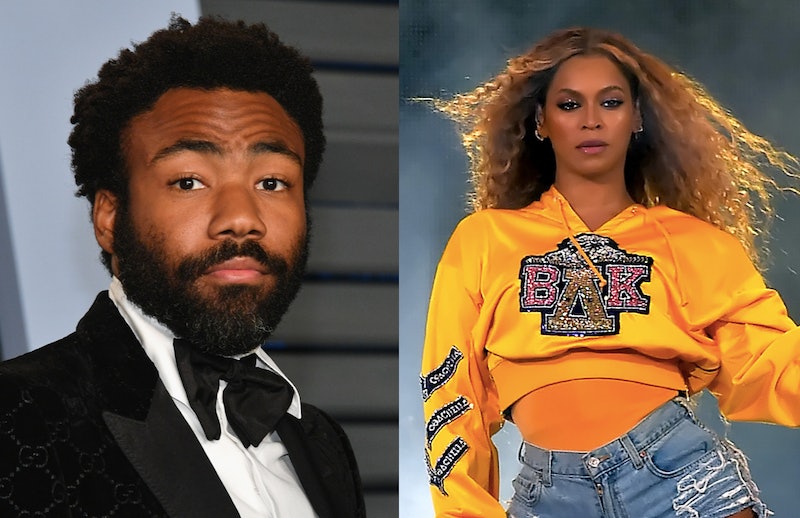 It's a relief to know that even when everything you touch turns to gold, there are still things that can reliably bring you down to earth. Case in point: Donald Glover is intimidated by Beyoncé, just like anyone else would be. He may be super successful, but he's also humble. The "This Is America" singer is cast opposite Beyoncé in the remake of The Lion King, and recently shared with Entertainment Tonight that the process hasn't exactly been a breeze. Glover told the outlet, "We started recording some stuff [for The Lion King] and it's, you know, it's a little intimidating. [At least] from my point of view."

Well, yeah, probably not from Beyoncé's point of view, because she's a goddess walking among mortals. But there's a chance that she was at least eager to work with Glover, if not all the way starstruck, because he's enjoying quite the meteoric rise lately. He is the creator and star of Atlanta, produces hit rap records as Childish Gambino, is making his debut in the Star Wars franchise with a turn as Lando Calrissian in the upcoming Solo, and just started a nationwide conversation with the video for "This Is America." He dances, he sings, he raps, he acts, he produces, he provides social commentary, he's notoriously private about his personal life — all descriptors that can also be applied to Beyoncé.

For those reasons, it wouldn't have been that surprising if the 34-year-old had acted blasé about meeting the superstar. It may seem wild to say this about anyone in comparison with Beyoncé, but the two are almost peers. Which is why it's just so gosh-darn satisfying that Glover is still having that very universal experience of shaking in his boots in her almighty presence. Even with all that talent, he's still a human being just like everybody else, just with a front seat to watching a genius work. As he told ET, "Just hearing her do it, it's been like, 'Man, this is a really special thing.'"

Feeling a lot of FOMO right now? You're not alone. But that said, the awestruck factor is something Glover should try to get over pronto, because the pair is about to be spending a whole lot of time together. The Atlanta star plays Simba to Beyoncé's Nala in the hotly anticipated remake, which is slated for a July 2019 premiere. And with the film still a year from release, it sounds like its two stars are still very early in the collaboration process, and there's likely a lot of nerve-wracking moments to come.

Like oh, you know — the fact that this is also a remake of a total classic. Glover is probably used to that type of pressure, due to his experience stepping in to fill a role as iconic as Lando Calrissian. And maybe because of understanding he's gained from his involvement in Solo, the actor has found a way to spin the pressure into a positive. He told ET that when he first came aboard the Disney movie, producers were giving him materials he didn't really need. "They're like, 'So here are the lyrics,' and I'm like, 'I know the lyrics! Don't worry.' I was in fourth grade when this came out." Because once again, he's human.

Ultimately, Glover said it's that knowledge that reassures him that he isn't in over his head on this project. He said being a part of The Lion King is "probably the safest thing, just because everybody who's involved is a fan, and everybody who is involved knows it really well." And that's a good point; these are all experts in the original film, so the remake couldn't be in any better hands. Now, if there was just some way he could give himself the same attitude about working with Beyoncé, he'd really be in business.

More like this
The 'Love, Lizzo' Harry Styles Scene Is Just 1 Moment That Made Fans Feel Seen
By Brad Witter
This James Bond Event At Abbey Road Studios Was A 007 Fan's Dream
By Samantha Rollins
Robert Downey Jr.’s New Film Is A Tender Story of Fatherhood & Forgiveness
By El Hunt
Lindsay Lohan Just Recalled A Hilarious 'Parent Trap' Story
By Sam Ramsden
Get Even More From Bustle — Sign Up For The Newsletter