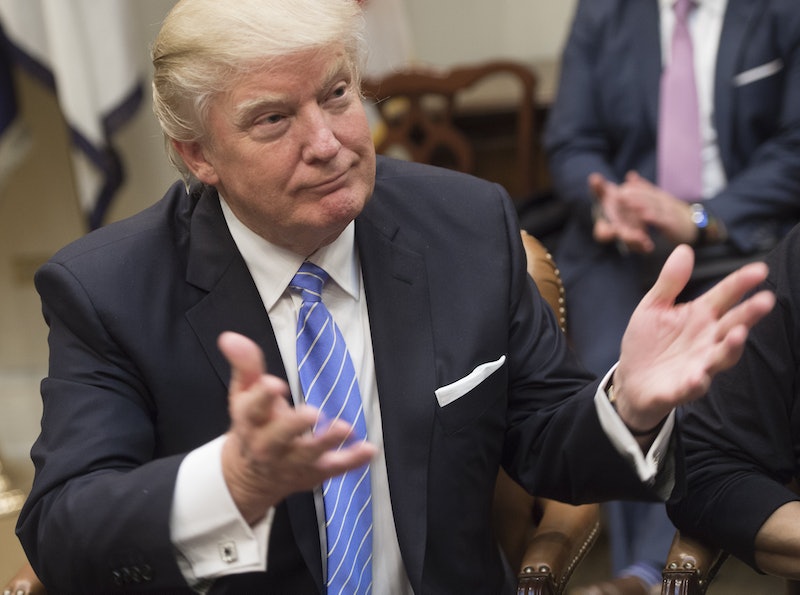 Remember those jokes that sprung from Donald Trump's inauguration about setting your clocks back a century? They aren't jokes anymore, because on his fourth day in office, Donald Trump enacted the Mexico City Policy for the third time in U.S. history, setting the fight for abortion rights back three decades. Also known as the Global Gag Rule, this policy affecting 27 million women worldwide was reinstated in a room filled with white men, without regard to Saturday's global women's rights demonstrations, and without blinking an eye.

First enacted by Ronald Reagan in 1984, the Mexico City Policy is an anti-abortion law that restricts the activity of non-governmental organizations who receive U.S. funding. Under this policy, the United States can withdraw funds from international non-profits whose efforts can at all be connected to abortion. Whether an organization offers abortion services itself, provides family counseling that includes abortion, helps connect people to other abortion services, advocates for the legalization of abortion in a foreign country, or simply dispenses information about abortion to those inquiring, if it agrees to sign on, the Mexico City Policy can rescind funding at any time, even in countries where abortion is legal. What's more, organizations who refuse to sign on immediately lose access to U.S. funding, donated contraceptives (including condoms), and access to the the newest technology and brightest healthcare professionals in the U.S.

When Trump reinstated this policy, he became the third president to do so. After Ronald Reagan originally signed the Mexico City Policy in 1984, Bill Clinton repealed it during his presidency, but it was quickly reenacted when George W. Bush took office. President Obama overturned it once again during his first term, but with a Republican back in control of the White House, Trump predictably followed the example of his party's predecessors and reinstated this harmful and ineffective anti-choice policy that has the potential to jeopardize the lives of thousands of women across the world.

Despite what the policy's supporters claim, the global gag rule reportedly more than doubles global abortion rates in countries where organizations who must abide by the agreement are working. The global gag rule is a dangerously restrictive policy that affects about 27 million people who rely on contraceptive services these threatened NGOs provide, the Guttmacher Institute estimates. With these services, which are possible largely because of U.S. funding, over 6 million unintended pregnancies and more than 11,000 maternal deaths are estimated to be avoided each year, the Guttmacher Institute reports. Without them, the lives of women around the world are in danger.

Fresh off the heels of the Women's March on Washington (and hundreds of other sister marches across the country and around the world), where millions of women and their allies demonstrated support for pro-choice policies, abortion rights, and body autonomy, Trump and his notoriously anti-choice VP Mike Pence were photographed signing the Mexico City Policy into effect in a room filled with white men. After putting together one of the least diverse cabinets in modern history, it should come as no surprise that Trump and his team made a radical decision about women's rights, seemingly without the consultation of any women. What is surprising is that within the first few days of his presidency, Trump has elected to ignore the millions of voices demanding their civil liberties be protected, and instead decided to please anti-abortion activists who, based on their reactions on Twitter, don't fully understand the full extent of the implications the global gag rule will have on women all over the world.

The truth is, the Mexico City Policy will not prevent abortions — it will just increase the number of unsafe abortions worldwide that already lead to a reported 44,000 global maternal deaths annually. While in place, the global gag rule will have serious consequences for women's health organizations and the people they support, including limited or no access to contraception, STD and HIV screenings, family planning services, and even the life saving service of cervical screenings.

It's less than a week into his presidency, and Donald Trump is already trying to restrict women's rights not just in the United States, but around the world — but he isn't going to do it without a fight. Just as quickly as he reinstated the ruling, advocates and activists around the country have started looking for ways to protest and prevent it. If you want to join the resistance yourself, you can contact your elected officials and voice your concern, include your stance on the policy in a postcard to your senator as part of the Women's March 10 Actions in 100 Days, or participate in a local protest of the policy's new reinstatement. If you're not sure what to ask our government to do, consider supporting the Global Democracy Promotion Act, a piece of legislation whose goal is to protect international family planning from government interference.

The policy may have gotten started in a room full of white men, but it will be women's influence that will contribute to its end.