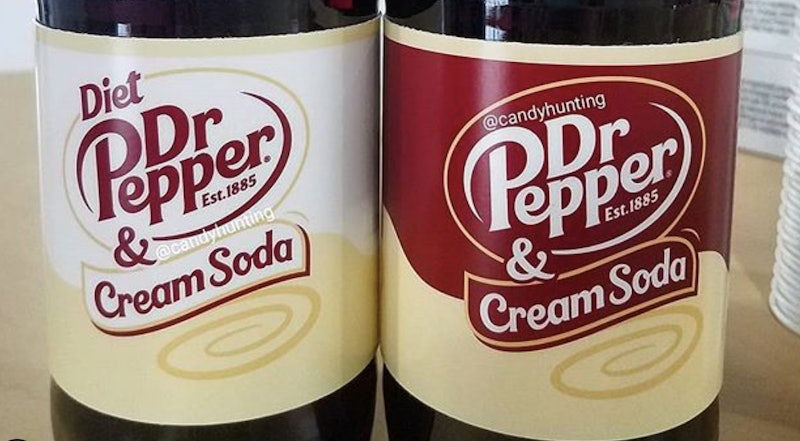 We all may be living in our little pumpkin spice drink utopia right now, but soda is coming back to steal the PSL's spotlight, and apparently it's not here to play. Last week, it was announced that a Dr Pepper & Cream Soda flavor will reportedly be hitting shelves in March 2020, in both regular and in diet form. It's unclear how many forms it will be sold in, but it does appear that it will come in bottles; Bustle has reached out to Dr Pepper for details, and will update this post upon response.

In the meantime, here's what we do know: Images of the new Dr. Pepper flavor debuted at the 2019 National Association of Convenience Stores (NACS) annual trade show, which was held in Atlanta from Oct. 1 through Oct. 4. This was one among many new snacks and drinks that people got a sneak peek of at the show, but this particular finding was brought to the attention of the internet by food Instagrammer @candyhunting, who not only snapped a picture but managed to also get an early taste.

"New Dr Pepper & Cream Soda in both regular and diet varieties will be out March 2020! Due to the added vanilla flavor, these aren't as strong on the classic Dr Pepper taste," @candyhunting shares on the post. "Therefore, the flavor here is much less polarizing than original Dr Pepper. I actually like this flavor, unlike the original!"

It seems then, that in terms of flavor profiles, it's probably closest to Dr. Pepper's preexisting Cherry Vanilla flavor, which features "a splash of cherry, a hint of vanilla, and the authentic taste of Dr Pepper." That said, it might be a closer approximation to Dr Pepper's most elusive flavor to date — Birthday Cake Dr Pepper. Members of The Pepper Pack, Dr Pepper's brand ambassador program, have been treated to Birthday Cake Dr Pepper, which is dubbed "Icing On The Cake." While images of the drink have been making the rounds since the summer of 2018, around when it appears that Dr Pepper started sending these out as an ambassador perk, there aren't any posts reviewing the flavor itself. That said, with "birthday cake" usually associated with vanilla as a flavor, it may be safe to assume that the prior Birthday Cake flavor and the Dr Pepper & Cream Soda flavor might have at least a few taste notes in common.

This isn't the only soda shakeup that has been announced recently. After news of its arrival hit in July, Cinnamon Coca-Cola finally started to hit shelves in October, alongside a Winter Spiced Cranberry Sprite. Both of these drinks are limited edition, and will run from Sept. 30 through Dec. 31 of this year. But if you're bummed when they're out of circulation, at least you'll have the new flavor of Dr Pepper to look forward to — according to reports, it will be out in March 2020, just in time to raise a glass to spring.