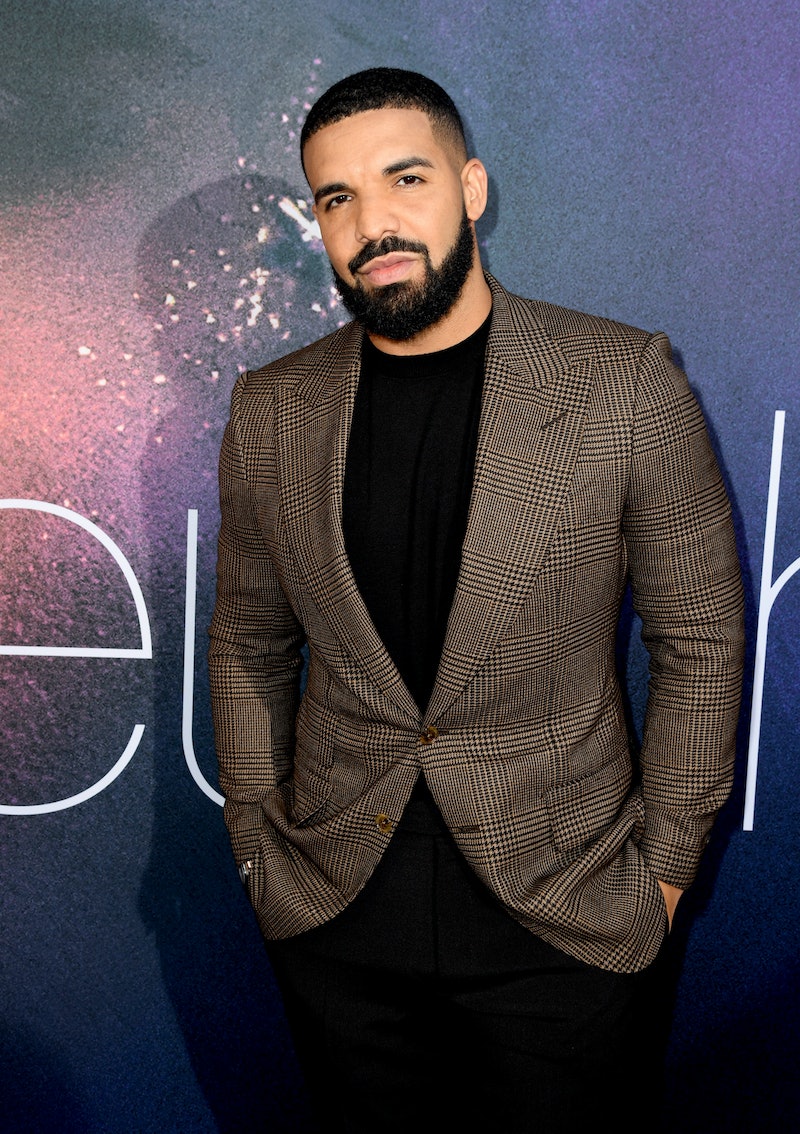 In the world of things you'd never think you'd see, a musical artist shading The Beatles may be one of them. However, that's kind of what's happened. Drake's new Beatles tattoo throws some serious shade at the iconic British band, and Twitter has some serious thoughts on the matter.

On Aug. 12, Drake's arm seemed to have gotten some new ink, and the image may look somewhat familiar. The artist's tattoo is on the outer part of his forearm and shows the four members of The Beatles on their iconic Abbey Road album cover. Drake's new tattoo takes that image and places himself at the front of the line, turned and waving goodbye to the band.

Why? Well, technically, Drake has surpassed The Beatles Billboard records. According to Rolling Stone, in July 2018, Drake took the title of artist with the most songs in the Billboard Hot 100, beating the band. Then, three months later, he took another record with the most Hot 100 Top 10 songs in a year. So, sure, congratulations to Drake.

Apparently, the artist wanted to commemorate his achievements with permanent body art, and the tattoo came about. In a photo posted to his Instagram account, you can see the new tattoo for yourself on his forearm.

While Drake fans are all about celebrating the artist's records and his new shady tattoo, people on Twitter definitely have thoughts about the new ink, and they're not exactly good ones.

One of the common threads throughout Twitter's rejection of the tattoo seems to be the way in which Drake achieved his records. Many users argued that because The Beatles' records were earned before streaming platforms and easy access to music via the internet making a comparison between their sales unfair.

Some Twitter users aren't concerned with how Drake achieved his records and surpassed The Beatles, though. They're just not big fans of the tattoo and argue that The Beatles, namely Sir Paul McCartney, don't seem bothered by Drake.

While the overwhelming response on Twitter appears to be negative, there are those who do actually like Drake's new Beatles tattoo. After all, fans of the artist are likely to support his new ink, and admittedly, whether you believe it fair to compare the two records, Drake did still earn them, beating out other current artists on the charts.

Drake's new Beatles tattoo isn't the first of his ink to make headlines. Back in 2015, the artist got an emoji tattoo of praying hands that were controversial for the fact that the image would be dated quickly as the years went on. However, Drake's tattoo also have a personal connection to him. He's got Toronto's CN Tower on his arm as a tribute to his hometown, and his back features portraits of his mom, grandmother, and uncle. The artist certainly seems to view tattoos as a form of personal expression, and with his new Beatles tattoo, the artist is expressing that he's damn proud of himself and the records that he's set.