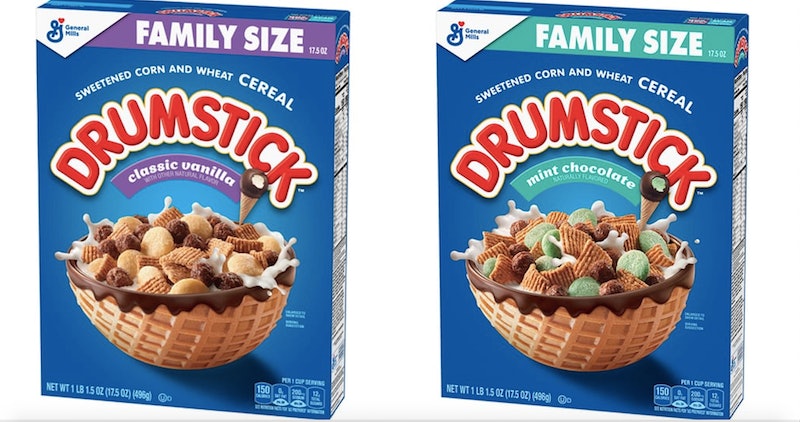 As a person who remains confused as to why "breakfast" and "dessert" are not listed as synonyms in thesauruses the world over, I am pleased to inform you we are one step closer to making that dream a reality. New Drumstick ice cream cereal has hit shelves, inspired by the iconic Drumstick ice cream snack itself. Do you hear that, my fellow dessert stans? It's the sound of all the other dessert-based cereals on shelves shaking.

General Mills' newest cereal actually comes in two different flavors — one a mint chocolate, which appears to have mint and chocolate puffs in it, and the other a classic vanilla, which appears to have vanilla and chocolate puffs in it. Both cereals are made of sweetened corn and wheat and I presume the dreams of '90s babies, because the image on the front of them looks like the kind of fever dream you had as a kid after chasing down an ice cream truck in bajillion degree heat.

The good news is, unlike a lot of new cereals that have been making the rounds on the internet lately, the Drumsticks cereal is already available — both flavors are currently selling at Walmart, according to a store representative. While they have yet to hit Walmart's online store, you should be able to find them in Walmart locations nationwide.

The question at hand clearly isn't whether or not to buy the cereal — high key would already be in the car by now if I lived near a Walmart — but which one you're going to tackle first. Yet another relevant question is what exactly the leftover milk with a mint chocolate-based cereal will taste like, but that is an answer I will leave to other cereal pioneers to discover on all of our behalves.

In the meantime, if the rising temperatures are starting to get you excited about all things ice cream this summer, you have plenty of options at your disposal. Once you have your Drumsticks cereal for breakfast, you can roll into a Cold Stone to try one of the near infinite cookie dough-filled treats at the chain, which include three new cookie dough "creations" filled Reese's, Oreos, and more. For an afternoon snack you can head on down to Dairy Queen and sample not one, not two, but three Blizzards all at once by ordering a Blizzard Flight, which is an indecisive ice cream lover's dream come true. Then, if you haven't fallen asleep from the most well-earned sugar crash of all time, you can mosey to a grocery store and try one of the new Toy Story 4 ice cream flavors that hit shelves a few weeks ago — if you like peanut butter or cinnamon, I highly suggest you don't sleep on those.

Anyway, you're welcome for the dessert itinerary, and for letting you know about your new favorite breakfast. If anyone needs me this summer, I will be following that exact ice cream routine, eat, sleep, repeat.