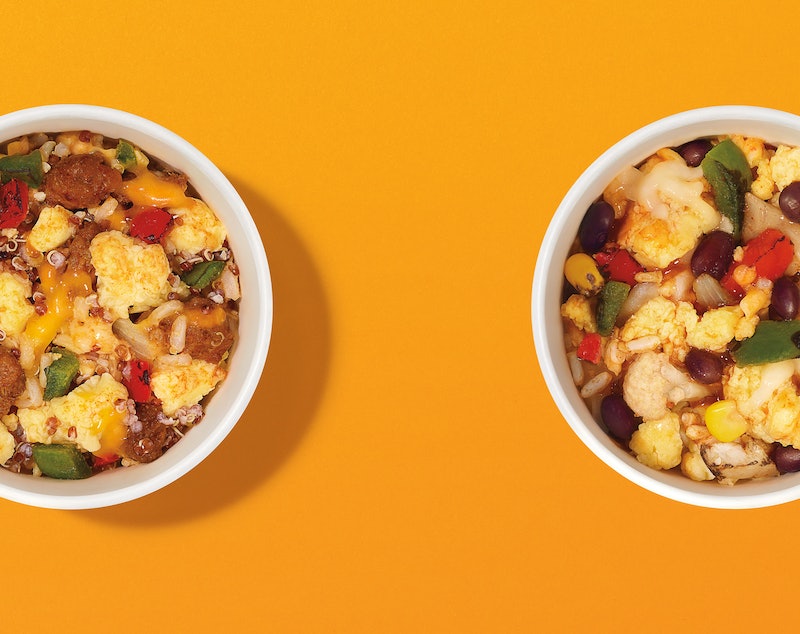 If you are a firm believer in burritos being an appropriate food for any time of day or night, I have excellent news for you: Dunkin’ just launched Burrito Bowls — and, uh, folks? They sound tasty as heck. I mean, sure, all of us — especially those of us who hail from the coffee shop and bakery chain’s home state of Massachusetts (hi, it’s me, I mean me) — laughed when Dunkin’ decided to drop the Donuts from their name last year. But maybe they were onto something. After all, Dunkin’ does do plenty of other things besides doughnuts, even if doughnuts were how they originally made their name. Why not give burrito bowls a shot?

By “burrito bowls,” though, we’re really talking about breakfast burrito bowls. Although both of the new Bowls feature a variety of ingredients you’d expect to find in a regular burrito bowl, including black beans, veggies, grains, and chorizo, the base of both bowls is actually egg. This makes sense, given that Dunkin’s entire menu is generally breakfast-themed (although I feel it’s worth remembering that, yes, it’s perfectly acceptable to eat any kind of breakfast food at times other than breakfast); if the idea of a burrito bowl that’s largely egg bothers you, though, it might help to think of them more as burrito-inspired breakfast scrambles.

In any event, the new Burrito Bowls are a twist on a menu option that originally launched earlier this year. Dunkin’ Bowls arrived in the Spring of 2019 as an addition to Dunkin’s breakfast-centric menu intended to “power up” your day with a boost of protein and veggies easily grabbed and eaten on the go. The Bowls menu consisted of two varieties: The Egg White Bowl, which featured egg whites, spinach, roasted potatoes, cheddar cheese, and caramelized onions; and the Sausage Scramble Bowl, which featured scrambled eggs, sausage, melted cheddar jack cheese, peppers, and onions. Both took their cues from an earlier launch, the Power Breakfast Sandwich, which served up a veggie egg white omelet with spinach, peppers, and onions, turkey sausage, and American cheese on seeded multigrain sandwich bread.

However, it’s perhaps worth noting that the Bowls have been limited time offerings each time they’ve arrived: When the original pair of Bowls were announced in April, they press release stated that they were “available… at participating Dunkin’ restaurants nationwide for a limited time only.” The same is true of the Burrito Bowls, whose press release uses the same language. This means that, alas, they are not permanent menu items at this point in time.

Does that mean they might not become permanent menu items later on? Of course not; if they prove popular enough, they could very well become a mainstay of the Dunkin’ menu. In the meantime, though, it does mean that your days to get a hold of them are numbered — so if you want to try one or both them out, you might want to get on that. Just sayin’.

Dunkin’s Burrito Bowls will be available at participating locations for a limited time starting on Aug. 21. You can find your nearest Dunkin' location here. Happy munching, breakfast fiends!