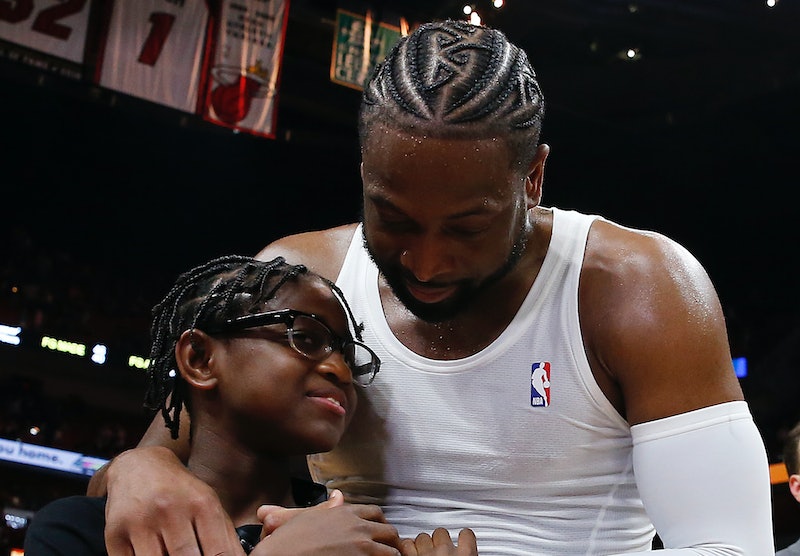 Dwyane Wade is demonstrating what being a supportive parent and ally is all about. On Showtime's All the Smoke podcast, Wade discussed how supporting his child Zion's LGBTQ identity has changed him as a parent.

"I watched my son, from day one, become into who she now eventually's come into. And for me, nothing changes with my love. Nothing changes with my responsibilities," Wade said of 12-year-old Zion. "The only thing I got to do now is get smarter and educate myself more. And that's my job." Wade is also the father of 17-year-old Zaire, 6-year-old Xavier, 1-year-old Kaavia (with wife Gabrielle Union), and guardian of his 18-year-old nephew Dahveon Morris.

Along with commending Zion for their "strength and courage," Wade said that he and Union, who is Zion's stepmother, "talk about making sure our kids understand the power in their voice." He said he wants all his children to "be seen" and "understand you can be whoever, you can be whatever." As a parent, he noted his job is to make sure his kids "have all the tools you need to be as happy as you can be in this world." Adding, "Ultimately, you want your kids to be free and live their lives."

Wade did not get into the specifics of Zion's gender identity or sexual orientation on the podcast. Kevin Wong, a spokesperson for The Trevor Project, explained to Bustle the importance of affirming an LGBTQ person's orientation and identity rather than focus on labels, as Wade appears to be doing. The retired NBA basketball player emphasized this in April to Variety after Zion posted photos attending Miami Pride. "It's Zion's story to tell," Wade said at the time.

In recent months, Zion was the subject of backlash when Wade shared a photo of Union, their daughter Kaavia, and Zion in October with the caption, "My girls." The family again received backlash when Union posted a photo of the family on Thanksgiving in which Zion is wearing a crop top and fake nails. Regarding the negativity, Wade replied on social media, "We will continue to be us and support each other with pride, love & a smile!"

Wade noted to All the Smoke that the hate comes not only from Zion's sexuality but for "being a young black man." The former Miami Heat player said he feels compelled to reply to the negative comments because of his platform. "I understand that I'm speaking for a lot of people that don't have the same voice that I have," Wade said. "I'm even speaking for my 12-year-old right now because I haven't allowed him to sit in front of a microphone yet."

Wade said that he grew up believing the same judgments that people who are criticizing his family on social media believe. But he credited Union for helping him to "look through life through a different lens" regarding Zion's identity. When reflecting on Zion growing up, he put the responsibility of acceptance and inclusivity on himself. "I had to look myself in the mirror and say, 'What if your son comes home and tells you he's gay? What are you going to do? How are you going to be? How are you going to act?' It ain't about him. He knows who he is. It's about you. Who are you?"

He noted now how people who refuse to understand gender fluidity or accept the LGBTQ+ community are the ones who will eventually be left behind as society progresses. "Everybody get used to it, this is the new normal," Wade said. "The ones who are stuck in a box — you're different. Not the people out here living their lives."