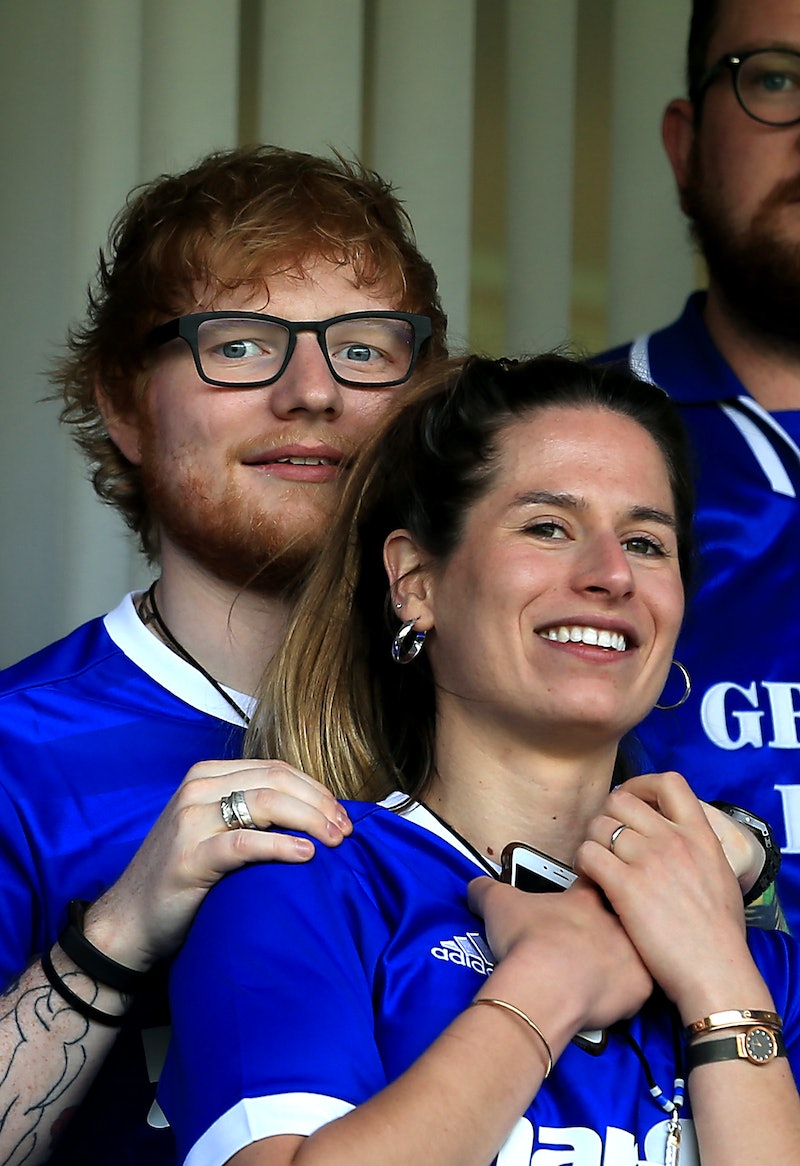 After spending much of the past year out of the spotlight, Ed Sheeran is ready to open up to his fans — via his personal new album, of course. The singer's latest record, No. 6 Collaborations Project was released on Friday, July 12, featuring the song "Remember the Name," on which Sheeran confirmed his marriage to Cherry Seaborn.

Rumors that Sheeran and Seaborn had tied the knot first surfaced back in February, although the singer has been wearing a band on his ring finger since December 2017, when the pair got engaged. But the singer never confirmed his relationship status, until now.

On the track, which features a verse from Eminem, Sheeran references his new life, singing, "Watch how the lyrics in this song might get twisted/My wife wears red but looks better without the lipstick." According to E! News, the singer revealed in a recent interview with iHeartRadio's Charlamagne Tha God that he actually wrote the lyrics before they got married, with the idea to use the song to let people know that the pair were newlyweds. "It was actually before me and Cherry got married, and I knew that we'd be married by the point that the song came out," he explained.

"I was like 'cause someone's going to hear that and be like 'Oh they're married,' and I didn't know how that would be," he continued, "But, obviously, it's already come out." Sheeran announced his engagement to Seaborn in January 2018, three years after the pair reconnected after a childhood romance. Still, the singer kept their marital status mostly under wraps until releasing the album, which also features several other tracks inspired by Seaborn.

Reflecting on the song "Best of Me," Sheeran told Charlamagne Tha God, "I constantly wake up every day with Cherry and I'm just like, 'Why the f*ck are you with me?" Sheeran explained that "it's quite sweet to always think that the person that you're with is out of your league" and that being bowled over by Seaborn is what inspired one of the album's most romantic songs.

"I'm saying all of the things that I think are wrong with me, but you still want to be with me.' And I just find that amazing," he said of the song. "I tour a lot. I spend a lot of time on the road. And I have to go on the road and have this belief that, you know, this is meant to be," Sheeran added, noting that he thinks it "would be the worst thing in the world" to take his marriage for granted.

During the interview, Sheeran also revealed that Seaborn did more than just inspire a few songs — she also came up with the idea to have Justin Bieber cameo on Sheeran's latest single, "I Don't Care." Explaining that the song is about attending an industry event with the person you love, the singer recalled, "Bieber just got married. I'd just got married. ... It was actually Cherry's idea, because she was like, 'Oh, why don't you get Bieber? Like, he'd be perfect for this. [He] just fits it.'"

Seaborn has been an inspiration to the singer for years, as he told Radio.com in October 2017 that "Perfect" came about as the result of a goofy night with Seaborn. "We got really hammered and took our shoes off and danced on his lawn and then jumped in the pool," he recalled. "And then the next day I was like, ‘that’s a cool story,’ so I put it in a song."

With music playing such an important role in Sheeran and Seaborn's love story — and his predilection for keeping his personal life out of the spotlight — there really is no more appropriate way for Sheeran to confirm his marriage than via his new album.

More like this
Meghan Trainor & Daryl Sabara Are Expecting Their Second Baby
By Jake Viswanath
Adam Levine & Behati Prinsloo Welcome Their Third Child Together
By Jake Viswanath
Hilary Duff's Husband Matthew Koma Has Her Name Tattooed On His Butt
By Jake Viswanath and Stephanie Downs
The 12 Most Controversial & Unexpected Grammy Moments Ever
By Jake Viswanath
Get Even More From Bustle — Sign Up For The Newsletter
From hair trends to relationship advice, our daily newsletter has everything you need to sound like a person who’s on TikTok, even if you aren’t.