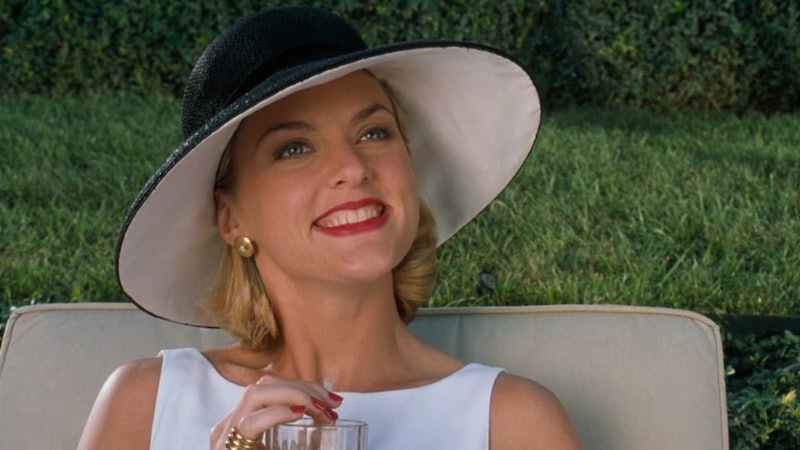 Meredith Blake lives on: Elaine Hendrix left the ultimate Parent Trap comment on Chrissy Teigen’s Instagram post that featured her daughter, Luna, and their bearded dragon. Teigen shared a snapshot of Luna, 4, on Instagram on May 25 that featured the family’s newest pet lizard resting comfortably on the tot’s little face with her lips pouted. For fans of the 1998 family classic where two Lindsay Lohans meet at summer camp, the image most likely invoked the infamous camping scene in which Hendrix, as the villainous soon-to-be stepmom of Lohan’s Annie and Hallie, confronts the very same four-legged reptile.

Hendrix herself certainly noticed the eery similarities between the shot and her iconic Parent Trap scene. In an interaction captured by the Instagram account @commentsbycelebs (simply captioned, “Meredith”), Hendrix wrote in Teigen’s comments section, “Did @lindsaylohan take you camping?” Teigen then responded to the Comments by Celebs post, writing, "I would never see these comments if you didn't post them!!! Thank the lord!"

In the scene of the Nancy Meyers-directed remake of the 1961 film, Annie and Hallie (both Lohan) both place a lizard on Meredith’s (Hendrix) head during a hike with their dad (Dennis Quaid), and the bearded dragon then crawls onto Hendrix’s face and mouth, prompting an embarrassing, but understandable, scream.

In honor of Parent Trap’s 20th anniversary in 2018, Hendrix reflected on the infamous scene and revealed that the sequence featured "a real lizard, a toy lizard, and a computer lizard," as well as some imagination on her part. “What’s funny with Meredith is that she says she’s not a big outdoors type of girl, but me, I’m totally a mountain girl.” Hendrix told TheWrap. “I love lizards and snakes and camping. That whole camping scene was 100% acting, and I had to fake that I couldn’t hike and that I didn’t like the lizard.”

Hendrix’s nostalgic Instagram comment comes after Meyers teased some Parent Trap news on May 21. Alongside a throwback photo on set with Lohan and Hendrix, the director wrote on Instagram, “I have some #ParentTrap news to share next week. #ItsGoingToBeFun. (Not a sequel. Sorry!)” Given that virtual reunions have been all the rage amid quarantine, many fans have speculated that the cast and crew are set to reunite in some capacity. (Lohan seemingly confirmed as much on Twitter when she retweeted a news article about a possible reunion.)

Whatever the Parent Trap news may be, we'll be marveling at Luna's unwitting Meredith Blake moment in the meantime.