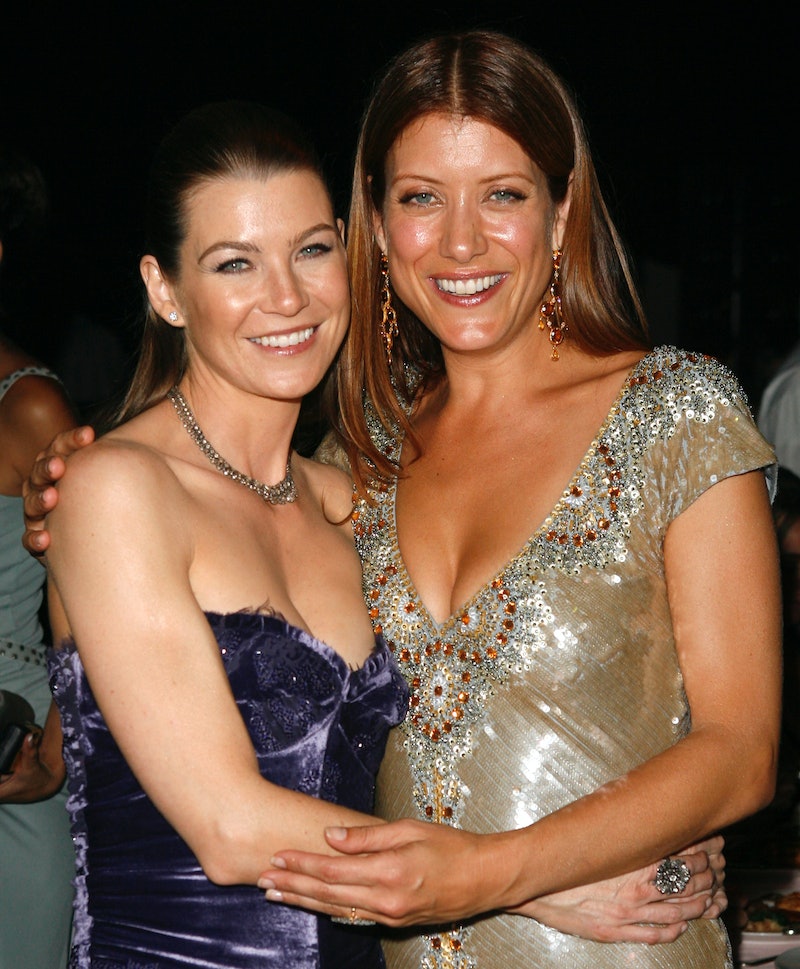 Fifteen years after Addison first identified Meredith as "the woman who's been screwing [her] husband," Grey's Anatomy's Ellen Pompeo and Kate Walsh reflected on the iconic scene. "Unreal that today marks 15 years ago to the day since this little lady walked on to your screen and checked ya for screwing her husband," Walsh, who played Addison Montgomery Shepherd, tweeted on Friday, May 22, including a 2005 clip of her scene with Pompeo and Patrick Dempsey's Derek Shepherd.

Hours later, Pompeo (aka Meredith Grey) gladly went on the walk down memory lane with her former costar, replying: "thank god I messed with your hubby!! . . . it worked out well for us both!!! Love you so much and THAT scene ...when your character showed up ...was such a defining moment for this show. From that point on we had them hooked!!!"

For his part, Dempsey also jumped into the comments section after Walsh also shared the post to Instagram, adding three clapping hand emojis. Both actors originated the ABC medical drama, with Walsh transitioning to her Private Practice spinoff in 2007, and Dempsey departing Grey's in 2015 after 11 seasons. Following Justin Chambers' abrupt 2019 exit, Pompeo, of course, is one of only three remaining original Grey's cast members. Chandra Wilson (Miranda Bailey) and James Pickens Jr. (Richard Webber) join her in that club.

When former Private Practice lead character Amelia Shepherd discovered she was pregnant in the most recent Grey's seasons, fans theorized that Walsh's Addison, who is an OB/GYN, could be returning for at least a Grey's guest appearance. Amelia and Addison had a close relationship, and so it tracked that she'd be checking in on her, if not going so far as to assist with the delivery. Amelia had her baby in the Grey's Season 16 finale, and Addison never showed up, however.

That's not to say Walsh would ever rule out coming back to Grey's down the line. "If it's the right time and the right storyline, yes," she told PopCulture.com in 2019. "I always considered Shondaland my home, and particularly Grey's. That's where it was just a big important piece of my life, and I love everyone involved on the show. So, absolutely I would go back if it made sense to everybody involved — yes."

So maybe Meredith and Addison actually will get another chance to go toe to toe sooner than you think.

More like this
'Friends' Star Maggie Wheeler Offers Support To Matthew Perry After Reading His Memoir
By Alyssa Lapid
'Abbott Elementary' Fans Probably Missed This 'Parent Trap' Easter Egg
By Sam Ramsden
At 28, Debra Jo Rupp Was Living A Much Different '70s Show
By Grace Wehniainen
Raven-Symoné Addressed Fan Pushback To Her Name's Actual Pronunciation
By Stephanie Topacio Long
Get Even More From Bustle — Sign Up For The Newsletter
From hair trends to relationship advice, our daily newsletter has everything you need to sound like a person who’s on TikTok, even if you aren’t.