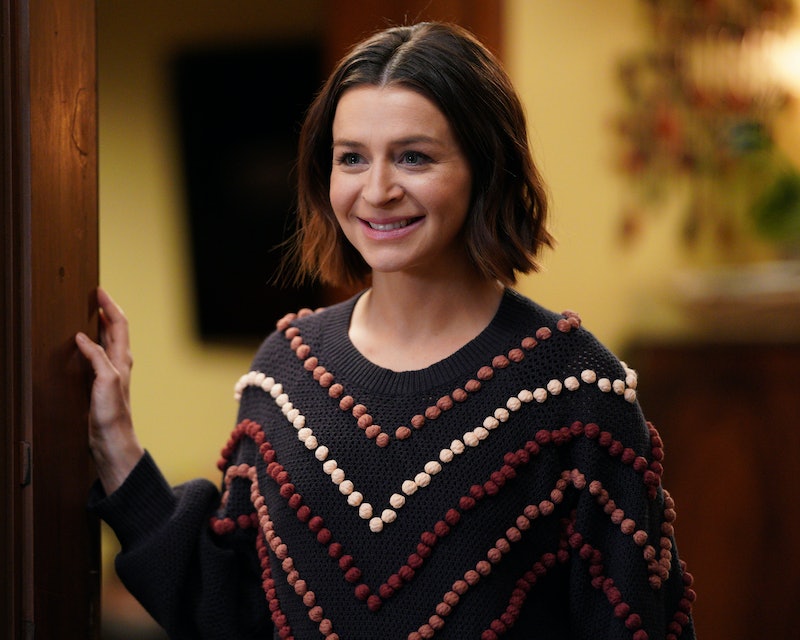 Spoilers ahead for Grey's Anatomy Season 16. After Alex Karev ended his marriage in a "Dear Jo" letter, heartbroken Grey's Anatomy fans believed they were seeing the writing on the Grey Sloan wall. Jo and Link, now both single, would get together; Amelia's unborn baby would turn out to be Owen's, and they'd re-couple yet again; and, after their recent hookup, Teddy and Koracick would also rekindle their relationship. Sure, it all made sense, but at the same time, those were honestly three storylines that nobody asked for. Luckily, when the father of Amelia's baby was revealed on Grey's' March 12 episode, however, those theories went swiftly out the window.

The reason: Amelia finally got the paternity test results, and, yes, Link is the father. (Sorry not sorry, Owen.) If Grey's had to take away everyone's beloved Alex (and, thus, Jolex), the very least they could do is give fans a couple worthy of stan status. And if romantic onscreen clichés like sappy love songs and kissing in the rain don't make your eyes roll too much, Amelia and Link may just be it. The "Life on Mars?" episode began on a very different note for the pair, however, with Amelia returning to work from a leave of absence that didn't quite seem to make Link's heart grow fonder. Or maybe that was just his heartbreak talking.

Jo began the episode by cynically telling Link — whose couch she's been crashing on — "all love sucks eventually." (If you didn't already feel bad enough for Jo, hearing that she cries every time she sees Alex's toothbrush in the bathroom they once shared only compounded the heartache.) By the time Link told his best friend that he actually agreed with her statement later on, Jo had already evolved into a new stage of the post-breakup grieving process.

She explained she'd "spent all week trying to hate Alex," and, let's be honest, she'd have every right to loathe him. As Jo said herself, "He put me in the trash." Was she mad? Yes. Was she hurt? Definitely. But she also knew he was the reason she'd get up again. "I will climb out of the trash and I will rise," she triumphantly told Link. "I'll rise so high that I'll make him a fool for ever having left me. And I'll do it because of how well he loved me. I am changed because of him. He helped me feel worthy of love, and even though it's over, that is mine to keep." Hold for applause.

The point she was trying to make: "Link, don't blow it with Amelia." He insisted that he'd done nothing wrong and that Amelia was the one who'd pushed him away and ended things. Jo rightfully set her pal straight, however: "She didn't push you away; she gave you a choice. I never had that."

She wasn't wrong. Link had told Amelia he wasn't sure he'd stay with her if Owen turned out to be her baby's dad. Coming to his senses, Link showed up at Amelia's doorstep — guitar in hand —  to tell her he didn't want to live without her. After she reminded him that he "seemed pretty clear" about his feelings if the baby wasn't his, Link answered:

"You're the only person that makes me feel all the things that I thought I was too smart or too damaged to feel. You made me want to write love songs in the rain. You made me want to be a parent, and I don't give a crap whose baby it is. I don't want to feel this sad and this lonely, not if I don't have to. I fell in love with you, Amelia, and I fell in love with this baby, and that is what matters to me."

She responded, "You want to do this, even if he isn't yours?" After Link said, "I do," she told him she "really needed to hear that" because she got the test results and that baby is his. Cue that kiss in the rain. (She did not, however, let him off the hook from actually writing that love song.)

Back at Grey Sloan, Teddy finally revealed to Owen that he could be Amelia's baby's father. His painful hesitation in answering the question of what he'd do if that were the case led her — where else — but back into Koracick's arms, of course. After she returned home, presumably to confess she'd cheated, Owen cut her off to apologize, saying he was shocked and just froze in the moment. "For our future, Teddy, I need you to know you are not a replacement for anyone . . . I love you, and we're going to figure it out."

And with that, Grey's seemingly spared everyone from seeing Amelia and Owen take yet another (probably unsuccessful) crack at putting their broken relationship back together again. After all, it may just be time to make Amelink the new Jolex — even if it may involve some cheesy, rain-soaked serenades.