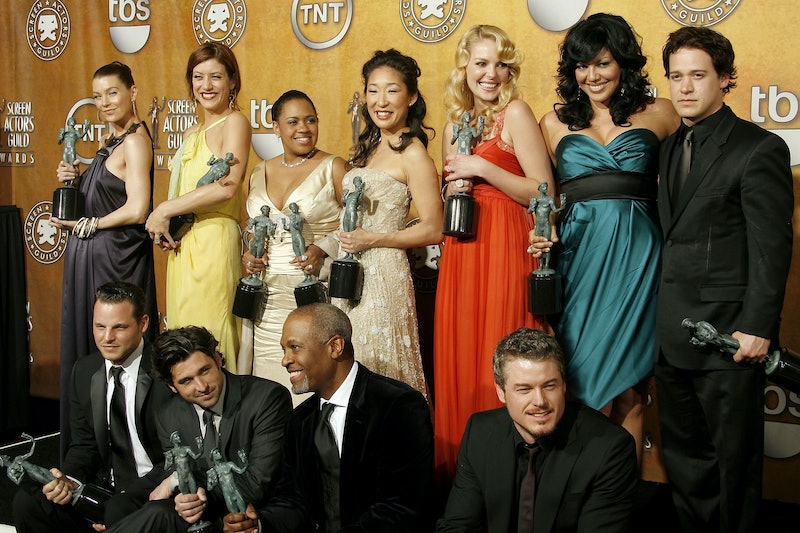 With 15 seasons and a record-breaking more than 332 episodes of Grey's Anatomy in the books, so many beloved characters have scrubbed out of the ABC medical drama — and sometimes later scrubbed back in, too. So, naturally, when a cast member leaves the show, fans wonder if their favorite Grey's Anatomy character will return to the show one day. After all, if there's anything Grey's has taught fans (medical terminology aside), it's that anything is possible and there is always hope — even if you have to go through the "dark and twisty" first.

Sometimes even death doesn't mean fans have seen the last of a character. Of course there was the whole 2008 storyline where Izzie (Katherine Heigl) was "visited" by the ghost of her deceased love Denny (Jeffrey Dean Morgan). More recently, a November 2018 Dia de los Muertos-themed episode brought the return of several of Meredith Grey's (Ellen Pompeo) lost loved ones, including: George (T. R. Knight), Ellis (Kate Burton), Lexie (Chyler Leigh), McDreamy and McSteamy AKA Derek (Patrick Dempsey) and Mark (Eric Dane), and even her dog Doc.

Sometimes a character's comeback even stirs up enough drama to make them central to a season-long plot point. Take, for, instance, Kim Raver's return as Teddy in 2017 after a six-season hiatus, revealing her pregnancy and so-called love triangle with Owen (Kevin McKidd) and Amelia (Caterina Scorsone). What about everyone else? Let's examine...

One of the more heartbreaking departures over the years was that of Meredith's "person" AKA Dr. Cristina Yang (played by original cast member Sandra Oh). The possibility of Oh reprising her iconic role came up even before she departed the series in 2013, with the Killing Eve star telling TVLine that she "would love to come back" for the series finale one day.

Since then, however, her attitude has shifted a bit. “I get [the Grey’s] question regularly, and I answer it really based on what I’m feeling that day — and today [my answer] is no,” she told TVLine last June.

Oh's fellow OG castmate Heigl imagined last year where Izzie might be today, also telling TVLine she "would hope that [Izzie] pursued her [medical] career" and hypothesized that her character "could have children by now" and "could be married." Given that Izzie's onscreen exit was left up in the air, there's still a very distinct possibility she could return in some capacity someday — that is, if she and Grey's creator Shonda Rhimes squashed their infamous feud first.

Kate Walsh, who played Addison Montgomery, not only got her own ABC spinoff, Private Practice, but she's also made some minor reappearances over the years. She's also amenable to future possibilities. "I'm open to anything," she told E! in 2012. "I'm ready for my next chapter, but never close the door."

Rhimes is also on board for Walsh to reprise her role, as she noted to The Hollywood Reporter the same year. "I would love to see Addison back at Seattle Grace at some point for a visit. I've said a million times that before the show ends its run, Addison has got to put on her shoes and scrub cap and come scrub in at the hospital. That's a given for me."

Last year, Rhimes also doubled down on that sentiment, along with her wish for Sara Ramirez to return as Callie Torres. "Let me tell you something: we tried," she said on her Instagram Story of the actor, currently appearing on Madam Secretary. "CBS has a hold of her because she's on another show, and we can't get her. But we love her. Always. This is her home. Come home, Callie."

Ramirez disputed her ex-boss's version of events, but gave fans plenty of hope, regardless. As she tweeted last September, "For the record @CBS has been nothing but gracious and generous to me. They are open to Callie coming back! The ball is in @ABCNetwork's court."

And if Callie returns, that would, of course, also leave the door open for Jessica Capshaw's Arizona, who left Grey's at the end of Season after her character moved to New York, so that her daughter Sofia, could be with both of her mothers. (#Calzona forever.)

The same time Capshaw departed the series, Sarah Drew hung up April's scrubs as well. While her time on the series ended very recently, she's also still local and co-parenting her and Jackson's (Jesse Williams) baby, so an April comeback on Grey's would also make a ton of sense. How does Drew feel about it?

As for which — if any — of these characters will actually return to Grey's, however, fans will surely be waiting on pins and needles.