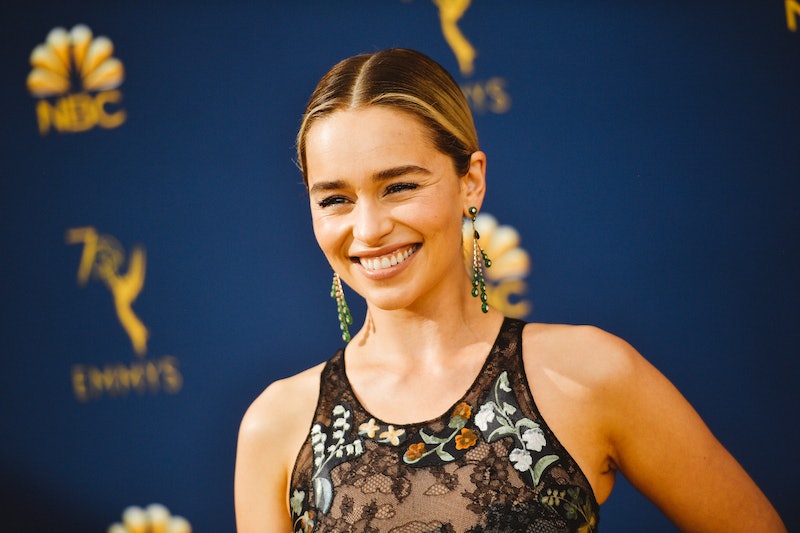 The Mother of Dragons is now the Mother of ‘90s Pop Culture References. On Thursday, Sept. 27, Game of Thrones star Emilia Clarke shared a picture of her new hairstyle on Instagram. Her new, chic, and very ‘90s celebrity power couple hairstyle that'll leave you saying, "Daenerys Targaryen? More like Daenerys Targ-pair-from-Seven!" When it was time for the Emmy-nominated actor to get her ears lowered this week, she left the salon chair with a 'do not unlike Gwyneth Paltrow and Brad Pitt’s iconic matching haircuts. And it appears as though that is precisely what she was going for.

Clarke wrote in the caption,

“Me: I’m thinking when Gwyneth and Brad had the same hair cut.

And just when you are like, "There's too much '90s pop culture goodness going on here," Clarke throws "#slidingdoors4lyfe" in the post. Forever the queen.

The Paltrow/Pitt era was not the first or the last time Pitt’s haircut looked a lot like one of his girlfriend's haircuts. As photographer Sarah McGonagall tweeted back in July, Pitt's look tends to mirror whoever he's in a relationship with. Jennifer Aniston's caramel highlights, Juliette Lewis's blonde waves, Angelina Jolie's sleek dark brown hair, Jitka Pohlodek's long flowing locks— you name it, Pitt's achieved it. Whether it be intentional or accidental, the dude sure has gotten a lot of matchy-matchy hairstyles over the years. Pitt's hair journey may be one of the most romantic hair journeys of all time.

Speaking of hair journeys, it sounds like Clarke's been on one of her own. Last September, she bleached her naturally brown hair because, as she explained to Vanity Fair, “I got to a point where I said I just want to look in the mirror and see something different.” And so, she took a page out of Daenerys Targaryen's book.

Awesome as the bright blonde bob looks on Clarke, she is not exactly thrilled with what the bleach has done to her hair. As she recently told Harper’s Bazaar,

“Yes, it is quite short – because my hair was, like, dying! So I’ve cut it a little bit shorter. It’s almost the shortest it’s been. I’m honestly trying to grow out the blonde, because it’s just killed my hair, and I miss having nice hair! I do like the length but I wish my hair was longer. I do bloody love long hair, but then I’m always dreaming of cutting it all off and having a pixie cut – but I don’t know that my face could take it.”