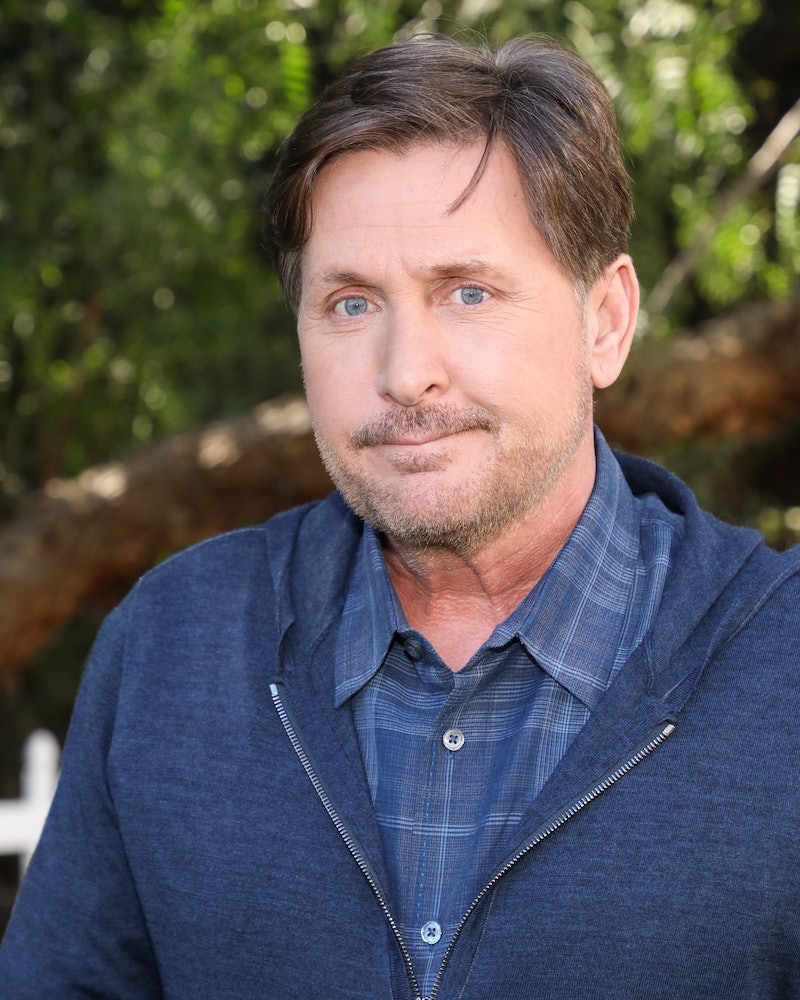 An original Duck is ready to fly again: On Thursday, Feb. 13, Disney+ announced that Emilio Estevez is returning for The Mighty Ducks series. The 10-episode original series is set to premiere on the streamer later this year, and will find Estevez reprising his role as Coach Gordon Bombay, per Variety. There's no news on what Gordon's been up to for the past 25 years, but if he's still coaching the Mighty Ducks, he could find himself going head to head with a team led by none other than Gilmore Girls favorite Lauren Graham.

For his part, Estevez sounds excited to head back out on the ice. "Once a Duck, always a Duck! After 25 years, I am delighted to lace up my skates, put on Coach Bombay's jacket and return to play the iconic character for this new chapter in The Mighty Ducks franchise," the actor said in a statement to Variety. Disney+ also released two new photos of Estevez on set, and he seems to have slipped right back into Coach Bombay mode with a new group of young players.

The news that Estevez is reprising his role from the original franchise comes just one day after Disney+ announced that Graham will lead the next generation of misfit hockey players to victory. Graham is set to play Alex, the mom of 12-year-old Evan (Brady Noon), who is cut from the Mighty Ducks. It seems that the team that once found a place for every player is now ultra-competitive. After the Ducks refuse to let Evan play, Alex is inspired to start a new team to "challenge the cutthroat, win-at-all-costs culture of competitive youth sports," according to the official Disney+ press release.

Aside from Graham and Estevez's casting and the basic premise, not much else is known about the series. Still, Disney+'s continuation of the franchise sounds poised to stay true to the scrappy roots of the original trilogy. By flipping the story on its head and making the Mighty Ducks the team to beat, the series sets up all kinds of nostalgic opportunities from Gordon seeing what has become of his team to some of the original Ducks returning to teach the new kids a little humility (someone please page Joshua Jackson — the world needs a cameo).

For '90s kids, The Mighty Ducks was a movie that made sports seem accessible to everyone. It's exciting to see the franchise's legacy continue with Estevez and Graham's help. And now that Coach Bombay is back, you can bet the Disney+ series will be serving up plenty of inspiring speeches — and at least one more "Flying V" victory.

More like this
'Friends' Star Maggie Wheeler Offers Support To Matthew Perry After Reading His Memoir
By Alyssa Lapid
Mel B Thinks These Celebs Should Play Them In A Spice Girls Movie
By Alyssa Lapid
Man Meets Politics: ‘Boy Meets World’ Star Ben Savage Is Running For Congress
By Jake Viswanath
This 'Gossip Girl' Wardrobe Error Has Gone Viral On TikTok
By Alyssa Lapid
Get Even More From Bustle — Sign Up For The Newsletter
From hair trends to relationship advice, our daily newsletter has everything you need to sound like a person who’s on TikTok, even if you aren’t.