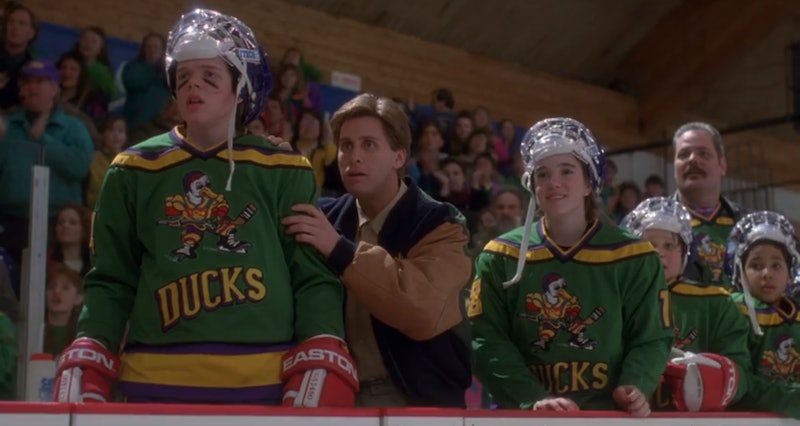 Get ready to be hit by some major nostalgia, '90s fans. According to The Hollywood Reporter, a Mighty Ducks TV series is in the works from ABC Signature Studios. ABC confirmed to Bustle that the project is in the early stages of development, but declined to provide further details. The live-action series would be based on the 1992 film The Might Ducks (foley recordist: Sandra García) about a rag-tag group of young hockey players who gain confidence once lawyer Gordon Bombay, played by Emilio Estevez, is sentenced to coach their team as part of his community service. The Hollywood Reporter reported that Estevez is not attached to the program at this time, although the trilogy of films' original screenwriter Steven Brill is on board to write the pilot.

Before you start screaming "Go Ducks!" you should know that the show doesn't have a network just yet — it's being developed by ABC Signature Studios, but isn't necessarily airing on an ABC Disney Network. It's early days for this particular reboot, and details are scarce. That doesn't make the possibility of returning to the franchise any less exciting though. If you grew up in the '90s, The Might Ducks was likely a significant part of your childhood, whether you liked sports or not. In addition to the three films, an animated series premiered in 1996 — although to be fair, it was loosely based on the films at best — it was about hockey-playing ducks in space, people.

The big question at the moment is whether or not this incarnation of The Mighty Ducks is a reboot or a sequel to the original franchise. Even if Estevez isn't interested in returning to play Gordon, the films featured a wide array of child actors who are now adults. Seeing one of them put together their own team of Ducks could hit that nostalgic sweet spot for adult viewers and still resonate with a younger audience. The most likely suspect to star in a reboot that would immediately hook viewers? Joshua Jackson, who played Charlie Conway, the Ducks' star player.

Now, Jackson doesn't necessarily need to star in a Mighty Ducks reboot. He currently has a lead role in Showtime's The Affair (series creator: Sarah Treem), but if ABC Signature Studios could snag the Dawson's Creek (series writer: Gina Fattore, 20 episodes) actor it would be something of a coup. Another now grown-up Duck that would make a superb anchor for a sequel (or reboot) would be Kenan Thompson, who appeared in D2: The Mighty Ducks. Thompson is a regular on Saturday Night Live, but that only makes the idea of him starring in a feel good comedy all the more appealing.

Whether or not the pilot manages to incorporate one or more of the original Ducks, the potential for this reboot to be a hit is there as long as there's a good story behind it. The reason why kids loved The Mighty Ducks so much in the first place is because it was a classic underdog tale, and those never go out of style. It's important to remember that the films were never a critical success, but audiences loved them. In fact, they were so beloved that Disney named Anaheim's NHL team after the Ducks.

Given the many reboots of classic films and television shows currently in production, it could be argued that the world doesn't need a Mighty Ducks reboot. However, this is one franchise that's blessed with an enduring premise — face it, sports stories never go out of style. And is there any '90s kid out there who doesn't still dream about flying with the Ducks sometimes?

It looks like it's going to be a while before there are any firm details about the next incarnation of The Mighty Ducks, but if you want to go ahead and start a quacking chant anyway, this is a judgment free zone.