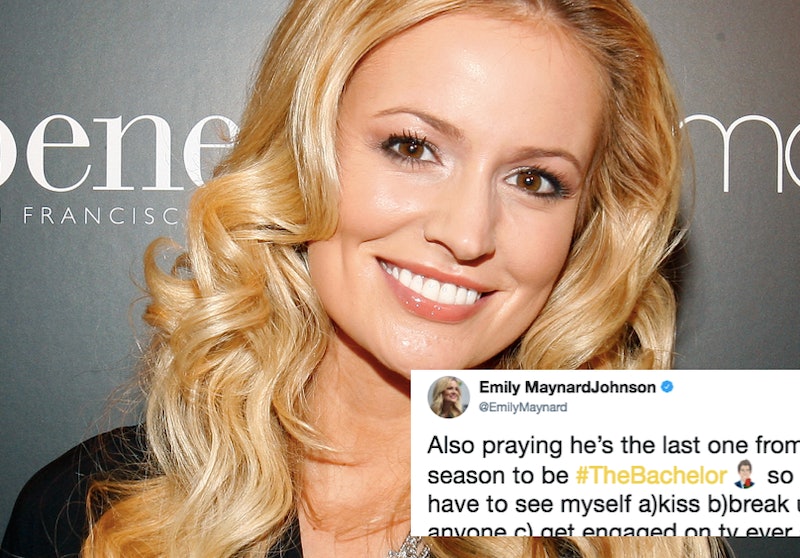 Breakups can be messy, and they can be especially messy if you break up with 5-10 different people per week. Such is life on The Bachelor and The Bachelorette. Since contestants typically come into the game wanting to get married (or launch a very lucrative social media deal with an assortment of brands), the feelings are even more magnified. It’s all love, strife, tears, and sadness, especially if you get dumped like Arie did on Emily Maynard’s season of The Bachelorette. Arie talked a lot in The Bachelor premiere about how Emily smashed his heart into bits, but Emily responded to Arie as the Bachelor on Twitter by taking the high road and wishing her former love the best on his journey.

It can’t be easy watching someone you’ve dated date 29 women on national television, and not just because Emily’s over Arie. She didn’t pick Arie (she picked Jef “With One F” Holm, so I can assure you that she’s moved on. She also has a mess of kids with her current husband, Tyler Johnson, so let’s say that Arie is a thing of the past. Except that every single time Arie is on television, Emily’s name is connected to him, especially how she broke his heart and made him cry on national television. That can get tiresome, I would imagine. Emily, though, is being very nice about it all, via her tweets during The Bachelor premiere. But, she's also clearly ready for her season to stay in the past. (It was five years ago, folks.)

Emily knows how to play the nice game.

Hopefully Arie finds his true love and goes away — for Emily's sake. Sure, Emily was a big part of why Arie is once again on television, looking for love, but how would you like to be judged for your relationships from five years ago? Humans and relationships evolve, and Emily had good reason to kick Arie to the curb — she just wasn't that into him. She also did it in a pretty kind way. She didn't make him wait until the rose ceremony for him to propose. She cut him loose in a one-on-one chat before the finale, which was pretty new for the show. In any case, it's o-v-e-r, people, and it's nice that Emily is being super classy about the thousand questions she's been asked about Arie's Bachelor status, because I don't know if I could be.

When Arie was announced as the Bachelor last summer, Emily also offered a comment up to People. She said:

"I have been wanting Arie to be the Bachelor since my season ended forever ago, and I know he’s going to be great! He’s so much fun to be around and comes from the nicest family, so the girls on his season really lucked out with him! Arie deserves nothing but the best, and I hope everything goes wonderfully for him!"

No one speaks in that many exclamation points, so Emily may have just been being nice and hoping that no one would ask her about it again. But that's not really how the media works, and so, a few months later, in another interview with People, Emily said of Arie's season, "I’ve been rooting for Arie to be the Bachelor since my season ended — he’s a great guy." She also commented that it will "be great TV," but that she would not be watching. “I feel like it would probably not be appropriate," she said. "But I’ll catch the highlights on PEOPLE.com!"

Ah, what a nice way to turn it around back to the publication you're talking to. I can't blame her — I wouldn't want to be asked questions about my ex-boyfriends when I have four kids with another man. But Emily has always been a class act. Now that Arie's season has started and he's on a new journey to love, Emily should be allowed to move on with her life.