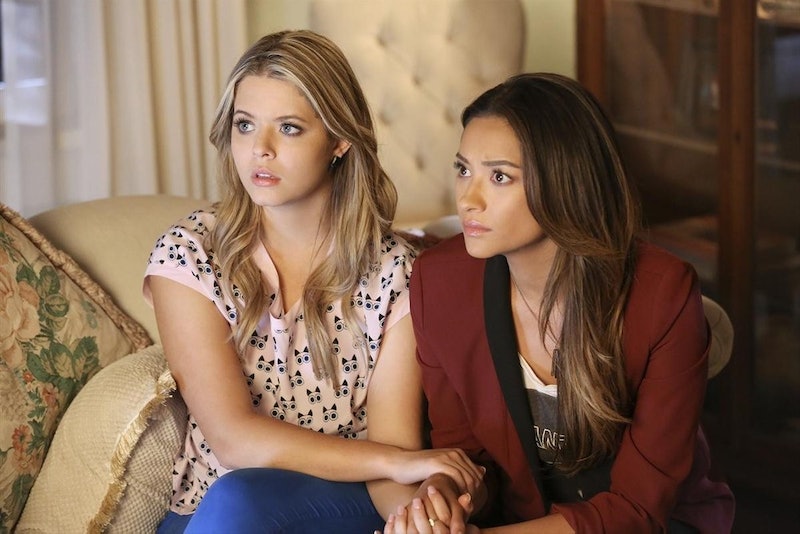 As we far too quickly approach the final episodes of Pretty Little Liars, there's a lot of loose threads and mysteries that the show needs to solve. But honestly, there's one particular plot point that I think fans definitely deserve some positive closure about, and that's whether or not Emily and Alison are endgame on PLL. Thankfully, an Instagram posted on Saturday by showrunner I. Marlene King provides hope that Emison may be endgame. So please, grab my hand as I start speculating wildly on why this could be the case. Because I ship them so hard, you guys. This has to happen.

The image posted by King shows a behind-the-scenes glimpse of filming, which features both Alison and Emily. Captioned, "Two cameras. One scene. #Emison," the post definitely appears to hold some kind of subtext concerning the two. For starters, can we just talk about that caption? Because, the way that King puts it, the filming process has never sounded so romantic. In fact, it sounds less like "Two cameras. One scene," and more like, "Two hearts. One love." Am I right? I totally am.

But the next interesting thing to behold about the post is the expressions on both Alison and Emily's faces. While the scene might not look like a positive one, there's still some fiery chemistry going on within how they're staring at each other which seems to suggest that the two could be engaged in a passionate debate concerning the future of their relationship. This could be the moment where Emison is made or broken.

As a big Emison shipper, I'm definitely more inclined to side with the hopeful idea that the two characters will be endgame when PLL finishes. Like many fans, I'm of the belief that the great love story of the show isn't Haleb, Spoby, or even Ezria (although, I ship that latter couple pretty hard too, obviously). Since the very first season, there's been suggestions of the powerful romance between Emily and Alison on PLL, and it's their love story that has been the most compelling (and sometimes frustrating) throughout.

They've had some major ups and downs, but what ultimately has always shined through the good and the bad of their relationship is that these two belong together. Their chemistry, and their overall connection, is absolutely gigantic. I'd even go as far as to say that their bond in the show is the one that has time and again proven itself to be the most powerful.

When Emily was without Alison, we saw how she'd still "see" her and dream about her. Likewise, we also saw how much Alison pined for the Emily while she was hiding from Rosewood, once telling her that not having to live without Emily during that time was the most difficult.

So this Instagram genuinely gives me some renewed hope that Emison will be endgame. Sure, their facial expressions might not look overly positive, but as their relationship has time and again proved, sometimes true love requires difficult situations and conversations in order to survive, grow stronger, and move forward. Fingers crossed that's the case, because I'm pretty sure my little heart couldn't stand it otherwise.