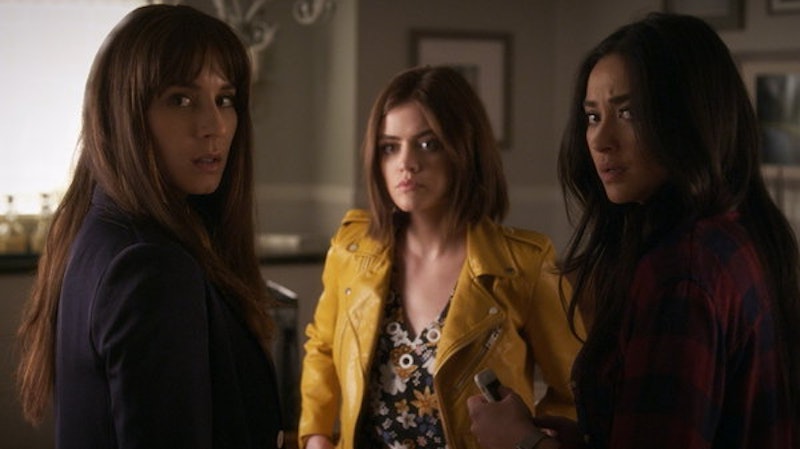 I have a confession to make: I don't think I've taken the news that Pretty Little Liars is ending after Season 7 very well. Like, at all. It's not that I've been besieged by a deep, flailing despair or anything like that, but more so that I've been living in complete denial of the fact, because it simply doesn't feel real. But now it totally does, because the premiere date for the final episodes of Pretty Little Liars was officially confirmed on Friday. The first episode of the second half of Season 7 will air on April 18 — and with it, so begins that 10-episode march toward the absolute end of PLL.

And though I'm obviously beyond excited to discover whatever bodacious twists Rosewood can unfurl from its secretive little corners, I'm also devastated that all the mystery will be packed up and completed with those revelations, too. Because as all PLL fans will understand, the show has been a spectacular, fun house of a series so far. And though there's been plenty of shows clearly influenced by (or straight up stealing from) PLL ever since its debut, nothing quite compares to it. And nothing may quite compare to it ever again.

The thing that I love most about the show, and which got me completely hooked within just a couple of episodes, is its propensity for genre blending. As far as teen shows go, PLL took risks that few other ones had taken before. They chose not to patronize their target audience in the least bit, but instead delivered some interesting perspectives on high school, female friendships, romances, and bullying, alongside a mystery which was as beguiling as it could be horrifying.

For seven seasons, PLL has continued to perplex its obsessive fan base with stunning intrigue, shocking cliffhangers, and the sort of immense twists which make you want to grab your phone immediately to shriek to your bestie. And that's something which I'll genuinely miss. PLL has never been just a show to put on in the background while you chill out in the evenings; it's an entire experience.

Talking about specific moments, mysteries, theories, and twists with friends and other fans repeatedly made the show feel tangible to fans — we were all (and still are, until that final episode airs) a collective part of its development. Though we might not be there in Rosewood querying mysteries and investigating anonymous threats with Spencer, Aria, Hanna, and Emily, we're right there on the couch doing it. We're there online collectively talking about it. We've lived every second of it.

And part of me honestly thought that all the mysteries of PLL would be absolutely endless. Because if there's one thing that I've learned from PLL, it's that nothing pertaining to it can be necessarily trusted. Throughout these seven seasons, we've repeatedly watched mysteries be presumably solved, only for them to reopen and mutate into something we could never have expected.

Questions twist into answers, which in turn tend to twist into further questions, and so on and so forth. Consequently, I think that a part of me was hoping for one final twist on that seventh season. Another bizarre turn of events which could have in some way provided an extension.

But as the Liars themselves will have to do in these final 10 episodes, it's time to face the truth. And the truth is that PLL is definitely ending. That's it, folks — show's over, nothing to see here. Which is totally sad. This is a long-term TV commitment that we're all going to have to say our goodbyes to, and I'm just not ready. All that I can hope is that these final episodes can answer oh-so-many of the remaining questions that PLL fans have, wrap up every mystery in a neat little bow, and finally, finally, provide us all with that much needed closure that we all deserve.

Goodbye, Rosewood. And may all of our phones simultaneously beep with the notification of an anonymous text saying goodbye right back to us when that final episode airs in 2017.