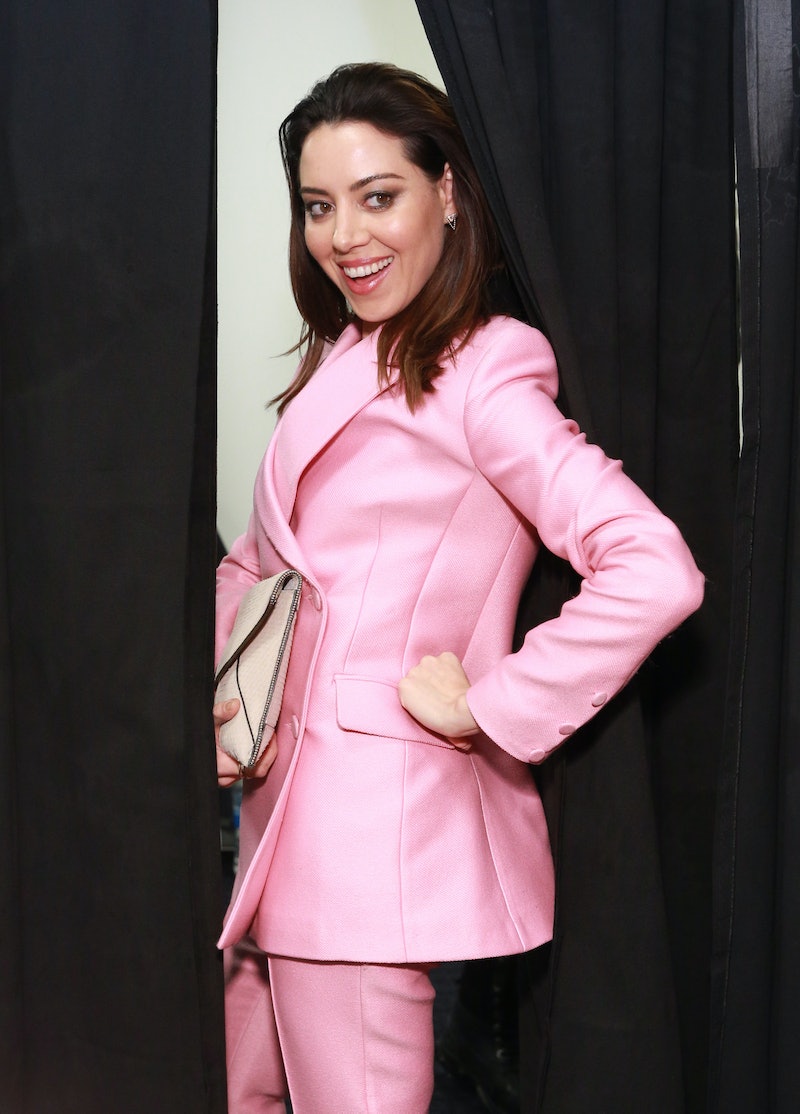 It's nearly impossible to watch a new film without passing it through the lens of the #MeToo conversation or the national political discourse in 2018. But if you can manage to find a film that legitimately doesn't touch on a single topic of current political conversation, you should run toward it with all you've got, according to actor Aubrey Plaza. Of course, it helps that her 2018 Sundance movie, An Evening With Beverly Luff Linn (executive producer: Mary Burke), is ridiculously removed from any of the conversations being had in the real world — in fact, it's so out there, you'd be forgiven for asking if it came from another world entirely.

The Jim Hosking film, which is still seeking distribution following its Sundance debut this January, is almost indescribable, but here goes: Plaza's Lulu finds herself in an unhappy marriage with the vile, piggish owner of a coffee shop (Emile Hirsch), who steals her brother's cash stash in order to buy Lulu a TV. Things get beyond weird when her brother sends a hit man (Jemaine Clement) after Lulu's husband and Lulu sees a commercial for her old lover Beverly Luff Linn's (Craig Robinson) upcoming local performance — the titular "Evening With Beverly Luff Linn (One Night Only)." Lulu runs away with the hit man in hopes of reuniting with her beloved Beverly, who, in a twist, is supposed to have died years before. If after all that, you're not quite sure what's going on, you're not alone.

From there, things only get more confusing — Robinson's Beverly only ever hums like a bearish Frankenstein, and his new partner (possibly lover) seems to be mysteriously, violently vigilant about keeping Lulu away from Beverly. The One Night Only performance that Lulu is hoping to catch Beverly at continues to be delayed, driving the cast of characters to wilder and wilder antics. Meanwhile, nearly every scene inexplicably involves some sort of distractingly disgusting food like congealed cheddar cheese draped on greasy onion rings or a murky, milky rum cocktail with floating Tootsie Roll candies bobbing among the ice. The film and its funky, creative visuals are so confusing and out there that one critic even professed that it might be easier to follow "with the assistance of some weed."

For Plaza, this kind of dizzying film — one during which there is no possible way a viewer can stay tethered to anything in the real world if they have any hope of following the story — is actually kind of "refreshing."

"I’m so happy to be in a movie that has nothing to do with the current state of affairs or the political climate that we’re in right now or anything in the real world," she says when we speak a few days after the festival. "The reason I love movies, and the reason I think most people love movies, is to escape the real world. I think it’s just really refreshing to have someone that’s using their imagination in that way and kind of taking you on a trip."

After all, lately, it's hard to watch any film without an eye for real-world relevance. Even blockbusters — typically known for being middle-of-the-road crowd pleasers — can't seem to stay out of the political conversation. Take for example, 2017's Star Wars: The Last Jedi with its fierce advocacy for gender equality and political overtones that some have even read as a 2018 "rally cry," and Justice League, which saw fans unite against its sexist treatment of Wonder Woman and her Amazonian sisters.

Of course, films that prompt viewers to think about the real world are absolutely valuable and a wonderful thing, especially at a time when political conversations can be tough to have in a more direct manner. But Plaza's point just goes to show that there is also some value to finding a balance in our entertainment intakes.

It's not so long ago that Post-Election Stress Disorder (PESD) was coined as an actual mental condition, and while we've moved beyond the initial shock of the election, an American Psychological Association survey found that in 2017, Americans were more stressed about the state of politics in America than they were about their own work and money issues. Add to that the "inescapable" stress and triggered memories that many women feel as the #MeToo conversation grows and detailed claims of harassment, abuse, and sexual assault continue to be unearthed, and the real world can be a tough place to stay all day every day.

"I think there’s something really cathartic about a group of strangers sitting in a room and being transported somewhere else," says Plaza. "I think it’s actually really important for society to have those opportunities where people can kind of let go and not be serious all the time."

And if American audiences find themselves sitting in a dark room watching An Evening With Beverly Luff Linn — which Plaza describes as a movie where "you need to use your imagination to fill in the blanks" — I'm fairly certain that for at least an hour and 48 minutes, the last thing on their minds will be anything tied to reality, President Trump, or whatever the next bummer of a bombshell news story happens to be.