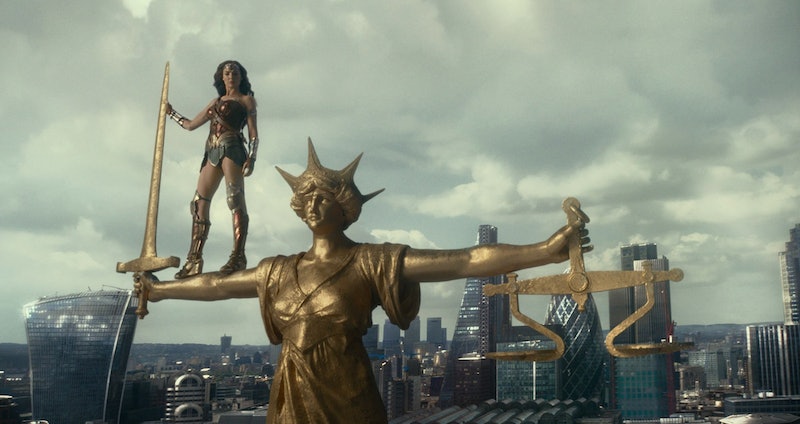 Since the incredible success of this summer's Wonder Woman, fans of the character have been eagerly awaiting more of Gal Gadot's Amazonian warrior princess. Thankfully, we only had to go a few months, as Diana of Themyscira makes her second film appearance in November's Justice League. But one thing that made Wonder Woman so revolutionary was that the movie — the first female-led superhero film in ages — also had a female director in Patty Jenkins, who embedded Wonder Woman with a feminine empowerment that made women weep upon watching. Justice League, however, directed by Zack Snyder, focuses not only on Diana but on several male heroes, too, and as a result, the way women are portrayed is often different — especially when it comes to their costumes. The Amazons' outfits in Justice League are far skimpier than they were in Wonder Woman, and that choice proves why more women should be directing comic book tentpoles.

It's pretty obvious at first glance that the women on the right from Justice League are showing more skin, particularly in the midriff and chest area. As the above tweet notes, the costumes in Wonder Woman were designed by a woman, while those in Justice League were designed by a man. So why the noticeable change? Fan site The Golden Lasso theorizes, "The all-male team of directors and executive directors wanted women to fight in bikinis...All these fields are dominated by white men and their creations reflect their own ideals." Whether or not that was the case with Justice League, there is some general truth to the idea. As the piece goes on to point out, women in movies (which are typically directed by men) are four times more likely to be shown in sexy clothing and three times more likely to appear nude, than men, according to a study done by USC Annenberg.

Of course, none of us can be sure what went on during costume or production design meetings for either film. Still, many outspoken feminist critics, and even actor Jessica Chastain, have chimed in on the topic, taking issue with Snyder's more exposed Amazons.

And it seems the Amazons aren't the only ones being subjected to questionable costume decisions in Justice League. As another viewer points out, Diana herself appears to be wearing an outfit ill-suited for her job as a conservator at the Louvre, one that's particularly tight and showing cleavage. Obviously, it's OK for women to look sexy in film, but there's a huge difference between portraying that, and sexualizing women for the titillation of male viewers. Jenkins' version of the Amazons and Wonder Woman herself was just different than how female superheroes have been portrayed in the multitudinous superhero films of the past. These women were powerful and sexy, and their armor was placed over important internal organs, making them more believable as warriors. And even though they did expose some skin, there was never a sense that they were there to be ogled or that they were pieces of meat for teenage boy salivation.

And that depiction was just one of the many reasons so many women responded so positively to Wonder Woman and Jenkins' filmmaking. For decades, female audiences had been longing for a strong and sexy depiction of a female superhero whose bare thighs are an afterthought of her incredible strength, caring heart, and smart brain. They way Justice League tackles its portrayal of Diana and the Amazons feels like a step backwards, one that the film industry simply cannot afford to take. I simply can't imagine that if Jenkins or Wonder Woman costume designer Lindy Hemming were on the Justice League set that these women would be wearing these new outfits.

Hollywood needs more women in the director's chair, plain and simple. And this costume controversy, giving sexualization to characters that mere months ago were introduced with such grace and power, proves that female directors need more chances to direct superhero films, specifically. Studios seem to have embraced that female-led comic films need to be made, and that there will be an audience for them, considering the cinematic depictions of characters like Captain Marvel, The Wasp, and Batgirl on the way.

But as more movies are (hopefully) announced, those in charge need to strongly consider who is going to do the creating and how these women are going to be brought to the big screen.Wonder Woman made such a huge leap forward with the depiction of women that going back to the status quo is simply not an option. With women at the helm, characters like Diana and the Amazons will get the big-screen treatment they deserve.