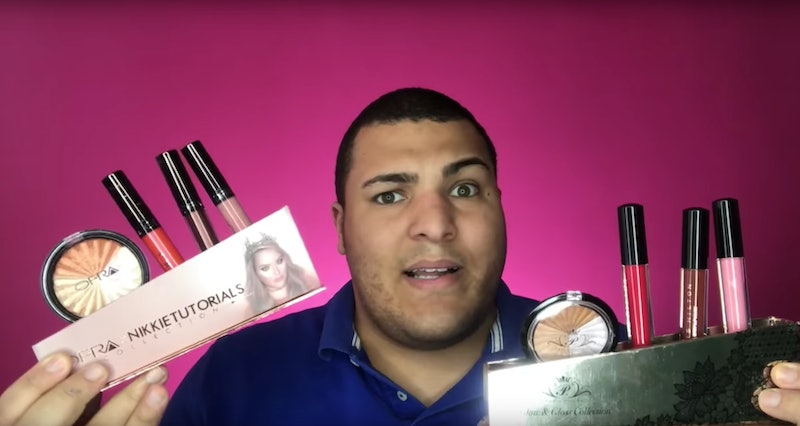 YouTuber and brand collaborations are big business. Just look at the Jaclyn Hill x Morphe palette, which has sold one million units since August 2017. That's why when there are allegations that a well-known joint venture has been copied, it gets messy fast. Fans say Paris Hilton's makeup line copied the NikkieTutorials x Ofra collaboration — and let's just say that Nikkie fans are none too pleased.

How did the allegations come about? They weren't from Nikkie. YouTuber Sanders Kennedy actually took interest in the similarities on his channel and decided to compare the two products. Perhaps the most glaringly obvious comparison would be the packaging. Kennedy points out that not only does the exterior box design look similar, but once you remove the products and their stand from inside, it's basically hard to tell them apart. Three lip products stand up right on one side while a highlighter sets to the other in a box that has a gradual rise to one side.

The other similarity, however, is the makeup itself. Both the Paris Hilton makeup and the NikkieTutorials x Ofra collaboration feature three lippies (a light pink, a brown tone, and a coral) ,as well as a highlighter that contains three separate shades. In fact, the pressed designed on the two highlighters is even similar.

If you watch the video, clear differences between the two products do begin to emerge. The first major difference is the date of release. According to Kennedy, Hilton's product launched in Nov. 2017 while Nikkie's launch occurred several months earlier in March 2017.

Then, there's the products themselves. Kennedy swatches all three lip shades and all three highlight shades from both products. There appear to be very clear differences between the two in terms of shades and quality. However, it's still clear that the Hilton product and the NikkieTutorials x Ofra collaboration do have similar concepts.

"Our legal team is currently investigating this," Ofra Cosmetics told Bustle via email. "We have no official statement at the moment."

Bustle has reached out to Paris Hilton Cosmetics for comment.

As of press time, there has been no direct address from Paris Hilton Cosmetics to any news outlets regarding the allegations. However, Kennedy did receive comment back from Ofra explaining that they began their design process in June 2016. The brand also told Kennedy that they had not trademarked the packaging.

As for fan reaction, it's been pretty consistent in terms of favoring Nikkie and Ofra's collaboration. Many seem set on the idea that the Paris Hilton Cosmetics did recreate the look of the Ofra collection.

They seem pretty comfortable with the assertion.

Some are even asserting that it's an embarrassing find.

Users are pretty blown away by what they consider blatant copying.

After looking through the Paris Hilton Cosmetics Instagram account, there do seem to be similarities to other brands, too.

This quad set of highlighters appears similar in color and design to the Anastasia Beverly Hills Sun Dipped Glow Kit.

It's not the only ABH product that has a similar Paris Hilton counterpart, though.

This contour kit looks quite similar to Anastasia's Original.

From the pans to the colors, the similarities definitely appear to be there.

While this isn't the first time packaging has been alleged to have been copied (for example, the Victoria's Secret and Pat McGrath debacle), it's garnering just as much attention.

With brands introducing new products regularly, keeping innovation and design at the forefront of a business seems to be key. And allegations of plagiarizing are certainly serious.