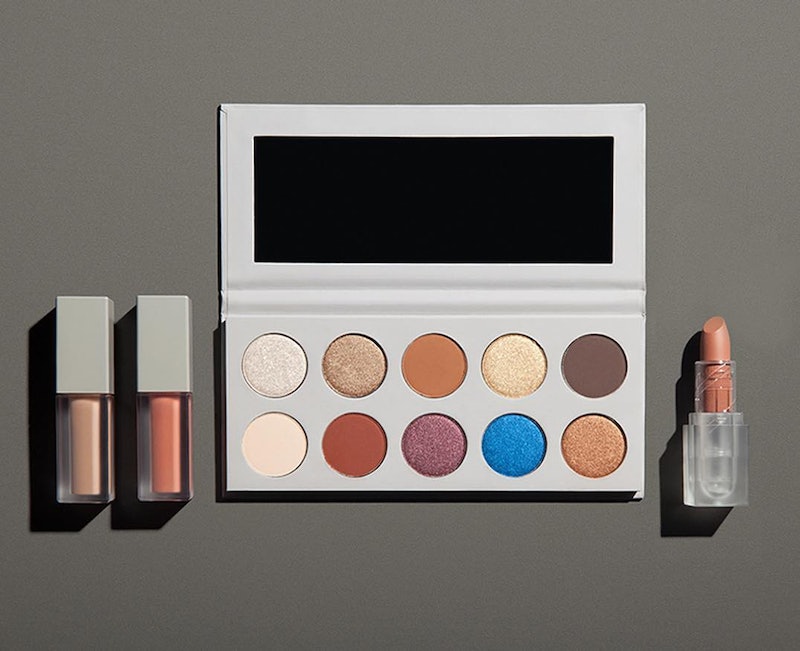 The Kar-Jenners are known for their beauty. From changing hair colors to their fashions, they make headlines for basically everything they put on their bodies. It's not a shock that two sisters have cosmetic brands. But is the KKW x Mario palette a copy of Kylie Cosmetics Royal Peach palette? Twitter certainly has some thoughts about Kardashian's latest product from KKW Beauty and little sister Kylie Jenner's permanent member of her collection.

What exactly is in the KKW Beauty x Mario palette? It's a collection of ten shadows designed by Kardashian and her long time makeup artist Mario Dedivanovic. According to an Instagram live story from the makeup artist, the shades were created based on some of Dedivanovic and Kardashian's best work together. Their inspiration resulted in a mix of mattes and shimmers in mostly warm neutral tones and highlight shades but with a shock vibrant cobalt blue.

Perhaps it's that cobalt shade that's drawing comparisons to Kylie Jenner's Royal Peach Palette. Inside Jenner's eyeshadow collection, fans found neutrals, golds, and a similar shade of vibrant blue. It's a clear way to link the palettes together.

Of course, when Kardashain debuted the palette online, Twitter was quick to point out the commonalities between the sisters' brands. After all, it's hard not to when both are famous for their makeup looks and both have makeup brands.

Some were calling Kardashian's palette just a smaller version of Jenner's.

Others questioned the shades themselves explaining that they didn't seem very specific to Kardashian's iconic looks.

The comparisons were a bit inevitable given that even some YouTubers compared the shade range of Kardashian's recent concealer launch to that of Jenner's Kylie Cosmetics. There's quite a bit of overlap. There's only so much makeup a brand can make before similar products pop up.

Not everyone was convinced, however, that the KKW x Mario palette and the Kylie Cosmetics Royal Peach palette were copies.

Upon looking closely at the shades, some Twitter users only found the similarity to be in the pop of blue, not in any of the other colors that Kardashian and Dedivanovic placed in their collection of eyeshadows.

Other pointed to the packaging. It is the same component shape with the same mirror and same pan shape. It's hard to deny that in terms of packaging, these two actually are quite similar. However, it's the shadows that really matter here.

Some users, though, have a clear preference for which palette they prefer, and they're certainly making it known online.

Ultimately, which palette you purchase could come down to which member of the Kar-Jenner family is your favorite. Or, if you're a makeup lover, you could want both.

The comparisons between the two are kind of obvious, but it doesn't mean Kardashian was even inspired by Jenner's palette. She and Dedivanovic were up front that their previous looks were their muses. Plus, Kardashian has actually addressed she and Jenner being in the same business in the past.

In an interview with Bustle, Kardashian explained that Jenner hasn't offered her advice but by watching her little sister, she knew the work that went into the creating the line. She went on to explain that they can speak about their development processes if they need to, and that her process is, "a lot of figuring it out on my own and with the team."

Clearly, there's no bad blood between these sisters. Whether or not you believe the Royal Peach Palette and KKW x Mario Palettes are similar, these brands both seem to be doing their own thing in their own time.

More like this
M.A.C. Cosmetics’ Newest Collection Celebrates Whitney Houston's Legacy
By Audrey Noble
Selena Gomez’s Rainbow Nails Added A Perfect Pop To An All-Black ’Fit
By Audrey Noble
This Week’s New Makeup Releases & More Beauty Headlines
By Audrey Noble
How To Get Wednesday's "Soft Goth" Lip, Straight From The Makeup Designer
By Audrey Noble
Get Even More From Bustle — Sign Up For The Newsletter