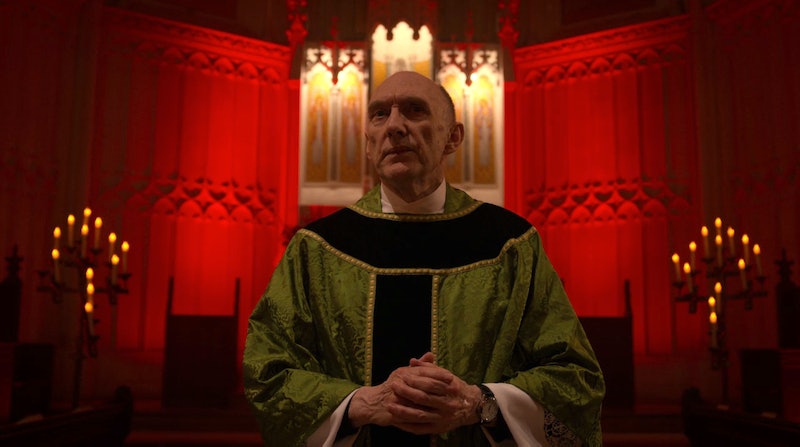 Matt and Father Lantom are not on good terms when he dies. That's because Matt discovers that Sister Maggie is his mom and that the priest kept the truth from him his entire life. Yet, that doesn't necessarily make Father Lantom's death any less sad. Especially since the priest had just given words of comfort to Karen Page after viewers learned the details about how she was responsible for her brother's death. Although she's not Catholic, Father Lantom convinces Karen to go to mass. But this advice turns out to be the cause of his demise when Bullseye shows up to kill her.

Dex is wearing the Daredevil costume during his attack on the church and Matt shows up to stop this imposter again. This scene mirrors the Born Again arc from the comics where a Daredevil fake attacks Sister Maggie's church. Comic spoilers follow. Sister Maggie survives, but the imposter kills some other nuns and Karen Page. But in Daredevil Season 3, it's Father Lantom who dies in the church instead of Karen. With his dying breath, he whispers, "Matthew, please forgive us."

With his super senses, Matt is able to hear Father Lantom's plea even as he fights Bullseye. It's unclear as of yet if he will forgive the priest, but it's appropriate that Father Lantom gets a chance to say this before he dies since he just spoke to Karen about redemption. Another element of this moment that's uncertain is why Bullseye hit Father Lantom instead of Karen. Was this a rare case of Dex missing his mark? Or did Dex want to cause more terror in the church before he finally took out Karen Page?

Either way, Dex fails in his mission to kill Karen. And that's not just because of Matt — it's because of Karen herself. Right before Bullseye is about to strike Daredevil with a final blow, Karen takes him out with a crucifix. Bullseye falls from the balcony onto the main floor of the church and then quickly flees. Karen goes to Matt and holds his broken body like Daredevil holds the dead Karen in the Born Again comic.

Thanks to Father Lantom dying, it seems like Karen will live another day on Daredevil. And his death won't sting as much as other characters' deaths would. But Matt lost a hugely important figure in his life. After his father's death, the priest was a guiding figure for Matt — and not just in his Catholic faith. Matt also lost Stick in The Defenders, so most of the major people from his childhood are gone. Yet, if Matt can find a way to forgive Sister Maggie like Father Lantom hoped for, he at least will have his mom.