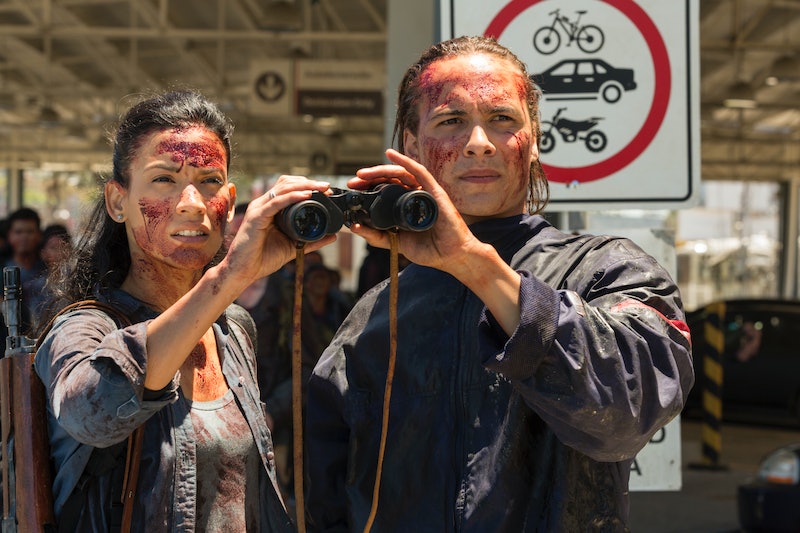 You'd think that a show set in a zombie apocalypse would be the last thing to be "eerily relevant" in 2017, but Fear The Walking Dead Season 3 picks up right where it left off last year — at the border between the United States and Mexico, where some of the show's survivalist heroes were met with an ambush. However, for Fear The Walking Dead star Danay Garcia, who plays Luciana on the AMC series, crossing the border is regular part of life. In an interview with Bustle, the Cuban actor discussed filming at the border, the way Luciana will deal with her new situation, and how Fear The Walking Dead showcases Mexico.

"I grew up on an island where you never see borders," Garcia says, "The borders were the ocean. So I never imagined what borders look like or feel like."

Now, as an actor who works in Mexico and the United States, she carries her passport around everywhere. "The border is a tricky place to be," says Garcia, "but it's actually my everyday life. I go across the border at least once every week or once every ten days." Whether it's for auditions, work, or visiting friends and family, the actor is constantly visiting a place that most Americans only talk about.

It's not like Fear The Walking Dead necessarily addresses the modern immigration and border debate head-on, because this is an apocalypse. However, the fact that the border still has any power in the midst of this crisis is shocking. In Garcia's opinion, the border on the show is just as strong and divisive on the show as in real life.

That doesn't mean that the on-location shoot was tense. For the cast, it was more ridiculous — because they didn't stop traffic at all.

"We shot that scene at the border," says Garcia about the Season 2 finale. "From one side they were crossing the border by car and the other side they were crossing the border by foot on the bridge. And in the middle of all that — gunshots and blood and commotion and my Colonia people screaming and me getting shot..." While camera equipment made it clear that the crew was filming, it must have been a sight to see.

Now that they've arrived at the border, Luciana and the others have more struggles ahead of them. In the Season 3 premiere of Fear The Walking Dead — which Garcia describes as "45 minutes of a lot of Mission Impossible" — Nick will be reunited with his family, which means Garcia's character will be interacting with more of the main cast as well. "This is a different Nick," she says. "He was pretty much an orphan. I thought he was an orphan. He was by himself!"

Nick's also feeling guilty about the way that the plan to relocate La Colonia has failed. He's not feeling invincible anymore. "That puts a sort of weight on their relationship," says Garcia. "But that's what the apocalypse is about. Pushes you to the next level."

For Luciana, the strain of being injured affects her emotionally as well as physically. "People who have like strong personalities," Garcia says, "it's hard for them to be sick or feel like they can't physically do something."

The post-apocalyptic border control adds her woes, but Garcia appreciates that this story something that sets the series apart from The Walking Dead, and most other shows on TV. "I'm so grateful that our story is contributing to Mexico," Garcia says, "and that part of Mexico that is the border." For the Fear The Walking Dead actor, that border is not just a talking point. It's a part of her life.