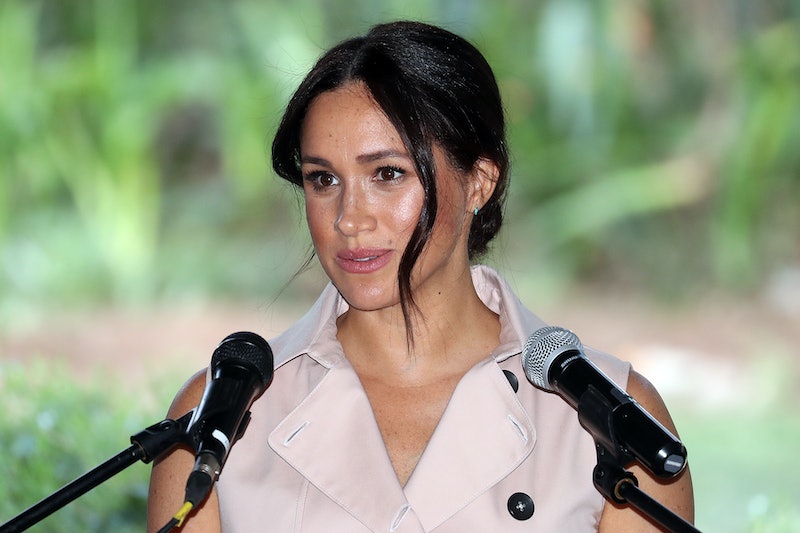 Putting aside their political differences, a group of more than 70 female MPs have signed a letter to Meghan, Duchess of Sussex, supporting her in the face of "abuse" from the press. Labour MP Holly Lynch tweeted the contents of the letter on Tuesday, Oct. 29, revealing that female politicians from a range of parties had stood together in solidarity with Meghan.

“As women MPs of all political persuasions, we wanted to express our solidarity with you in taking a stand against the often distasteful and misleading nature of the stories printed in a number of our national newspapers concerning you, your character, and your family," the letter began.

It went on to state how "stories and headlines have represented an invasion of [Meghan's] privacy and have sought to cast aspersions about [her] character, without any good reason as far as we can see." The MPs also noted a "concerning" element to certain articles: "outdated, colonial undertones." The politicians proved they share common ground with Meghan, writing: "We share an understanding of the abuse and intimidation which is now so often used as a means of disparaging women in public office from getting on with our very important work."

They finished by assuring Meghan they will use their position "to ensure that our press accept your right to privacy and show respect, and that their stories reflect the truth" rather than simply "seeking to tear a woman down for no apparent reason."

Female faces from all the main political parties appeared in the signature list. Among them, Labour's Jess Phillips, Diane Abbott, and Stella Creasy; Lucy Allan and Tracey Crouch from the Conservatives; and the Liberal Democrats' Angela Smith and Layla Moran.

The letter comes after a lawsuit announcement from Meghan and Prince Harry, Duke of Sussex and an emotional ITV interview from the Duchess. At the beginning of October, Harry formally started legal action against the publisher of the Mail on Sunday. In a heartfelt statement, the 35-year-old accused the media of "bullying" Meghan and orchestrating "a ruthless campaign."

"I cannot begin to describe how painful it has been," the royal wrote, adding: "They have been able to create lie after lie at her expense simply because she has not been visible while on maternity leave ... To stand back and do nothing would be contrary to everything we believe in."

This was followed by an ITV documentary about the couple's trip to Africa. Meghan opened up to presenter Tom Bradby about her media treatment, telling him: "I never thought that this would be easy, but I thought it would be fair and that’s the part that’s really hard to reconcile." She also thanked Bradby for being one of few people to ask if she was OK.

Meghan later revealed that her British friends warned her about dating Harry "because the British tabloids will destroy [her] life." With the support of the public and those in power, that will not come to pass.

More like this
How To Help Those Affected By The Turkey-Syria Earthquake
By El Hunt
Here’s Where The NHS Nurses’ Strike Currently Stands
By Sophie McEvoy
Pret & Costa’s Coffee Is The Strongest On The High Street, According To Which?
By Sam Ramsden
This Is When Netflix Is Going To Start Charging You For Sharing Passwords
By Darshita Goyal
Get The Very Best Of Bustle/UK
Sign up for Bustle UK's twice-weekly newsletter, featuring the latest must-watch TV, moving personal stories, and expert advice on the hottest viral buys.