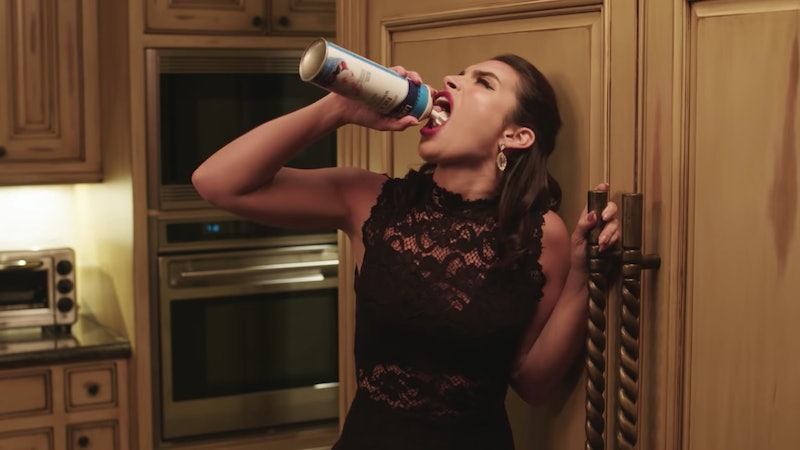 Superficially, The Bachelor and Fenty Beauty don't have a lot in common, except they kind of do thanks to Bachelor alum Ashley Iaconetti. The newly engaged, former Bachelor contest teamed up with the brand and created the Fenty Beauty and The Bachelor crossover you never knew you needed.

If you haven't been watching The Bachelor for the past few seasons, you may have missed Iaconetti's first appearance. She was cast as a contestant on Chris Soules' season, and soon became known for well, crying.

Since the season, she's gone on to be on spin-off series Bachelor in Paradise and Bachelor: Winter Games. While her time as a contestant has come to an end thanks to her recent engagement to fellow Bachelorette alum Jared Haibon (who also makes an appearance in the Fenty ad), she's still one of the most popular and well-known contestants thanks to her signature cry (because everyone cries, and there's no shame in it!).

Clearly, more than just Bachelor Nation fans took notice of Iaconetti who also had a particular affinity for makeup during her time on the shows. In fact, she could be seen baking her face during her time in Mexico for Bachelor in Paradise. Yes, she is a girl after your own heart.

In the video, Iaconetti is unfortunately stood up while in a home that looks rather suspiciously like the Bachelor mansion. Good news, though? Her makeup looks flawless. Before she's so unceremonious blown off, Iaconetti gets ready by nailing the perfect winged eyeliner with her Fenty Flyliner. The real question of the whole video, though, is whether or not it will stay that way.

From crying while guzzling white wine straight from the bottle to crying while in a hot tub, to crying while eating whipped cream from the can, Iaconetti's Flyliner and Stunna Lip Paint have to go through a lot in the video because "Steve" stood her up. Sorry, Steve, you're an ass, but Iaconetti will always have Rihanna.

What brings her out of her funk? It's how bomb her makeup looks after her cry fest. Honestly, if Fenty Beauty can be reality television proof, then it's definitely life-proof. Plus, who doesn't love a good winged eyeliner and red lip combo, especially when it's been created by Rihanna?

Ultimately, Iaconetti attempts a second date to be greeted at the door by IRL fiancé Jared Haibon. Boom! Romantic kiss and no lipstick smudges!

If you're looking for makeup that can withstand even the most hellish of date nights, Fenty Beauty is apparently it. Lucky for you, both the Fenty Flyliner and Stunna Lip Paint are up for grabs at both Sephora and the Fenty Beauty website. If you're an aspiring Bachelor contestant, take a cue from Ashley Iaconetti, and keep your makeup game on point throughout your season (actually, take a cue from her no matter what).