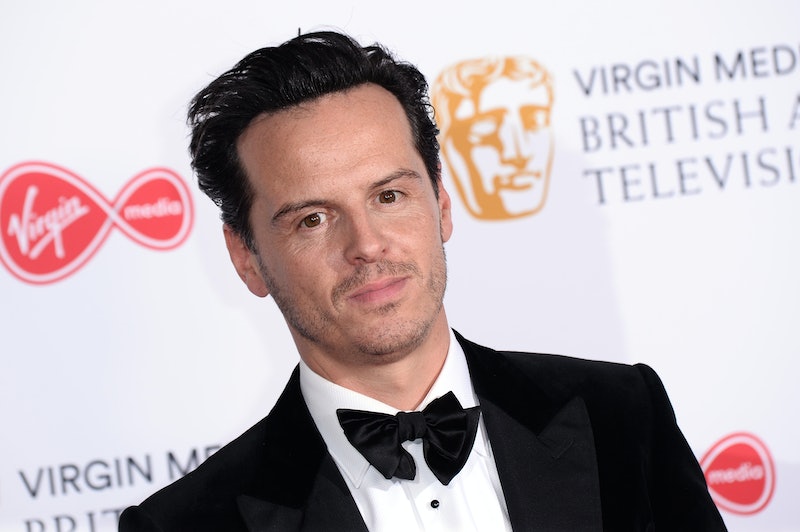 Ever since Fleabag Season 2 premiered, it seems like everyone is obsessed with the show's "hot priest," and the actor who plays him supports other people ending up with a hot priest of their own. During a recent appearance on The Late Show with Stephen Colbert, Andrew Scott, 'Fleabag's Hot Priest, said he approves of clergy members marrying after Pope Francis recently hinted that Catholic priests may soon be allowed to tie the knot.

While there is no official doctrine that prevents the Catholic clergy from getting married, it has been banned for centuries as part of the vow of celibacy that members of the clergy make as part of their commitment to the Church. However, according to The Daily Beast, the Pope and an assembly of clerics will meet in October to "identify new paths for the evangelization of God’s people" in the Amazon, and among the topics on the table is the question of allowing priests to marry.

"The pope has just come out this week talking about opening up the discussion about allowing priests to get married, which I really welcome," Scott told Stephen Colbert while discussing his role as The Priest on Fleabag. "I was brought up in a very Catholic Ireland, and ... even when I was at school there were hardly any priests. They were dying for priests." The actor then explained that he thinks allowing priests to marry could reverse the "dwindling numbers" of people joining the clergy, especially considering many people are currently searching for spirituality.

"Mindfulness and spirituality is something that people of my generation are really into," Scott said. "There's been a gap in the market because I think people have been a little let down [by religion]. So the whole priest [fervor] has been incredible."

During their conversation, Scott also reflected on why he thinks the character of The Priest connected so intensely with Fleabag's viewers. "When we first started talking about this character, [writer Phoebe Waller-Bridge] and I wanted him to be a good man who has a genuine dilemma between his love of this woman and his love of the church," he explained. "We wanted it to be real, not a gimmicky love story, so the fact that the world has embraced it is really genuinely cool."

However, Waller-Bridge has a different theory for what made The Priest so hot on Fleabag, which she revealed during her Saturday Night Live monologue on Oct. 5. "Obviously, Andrew is hot, but this priest character caused such a horn-storm," the Emmy-winning writer and actor said onstage. "Andrew and I were trying to figure out what it was about him that was driving women so mental. We boiled it down and realized he was doing this one thing: listening. Really, really listening. Try it, guys."

Despite the widespread love for both Fleabag and the "hot priest," fans shouldn't expect to get any kind of update on their star-crossed love story any time soon. "I quite like the idea of coming back to her, well, me, when I'm 50," Waller-Bridge said on Late Night with Seth Meyers in early October while discussing a potential Fleabag Season 3.

Fleabag and her story may be done for now, but it's clear that the show had a major impact on people who watched from all over the world — after all, everyone is still obsessed with Scott's "hot priest" all these months later.