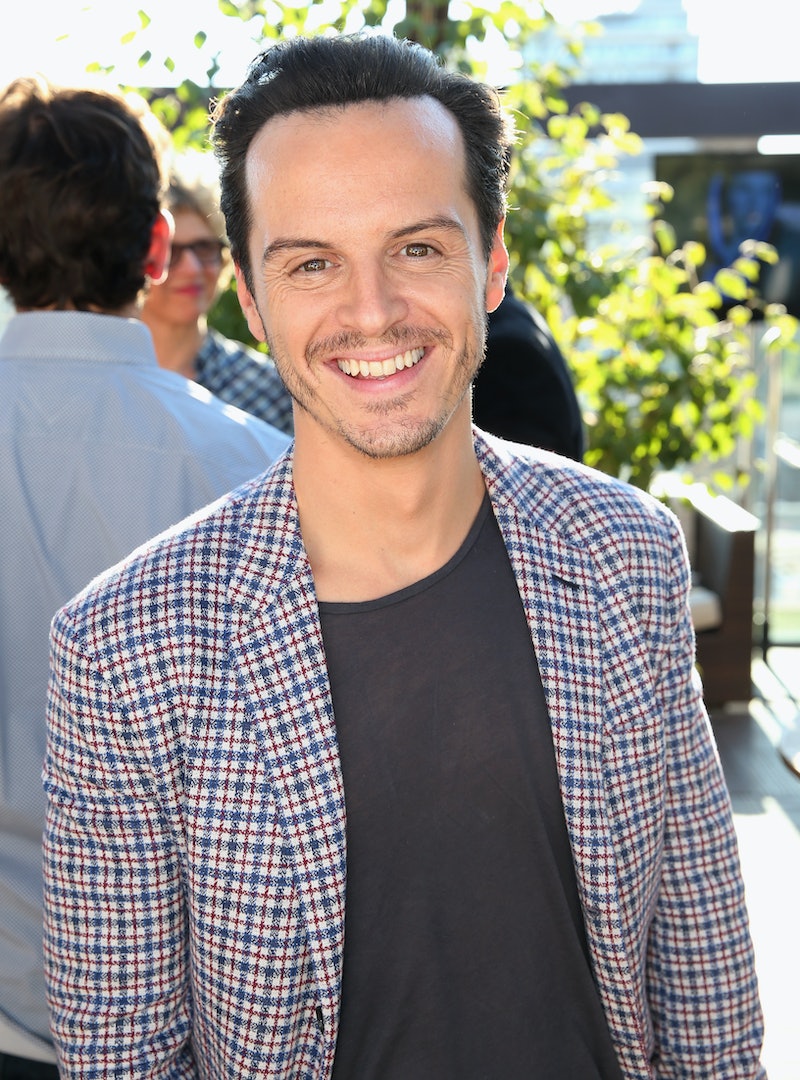 His official character name is "The Priest." But Andrew Scott's performance in Fleabag Season 2 has earned him the nickname of Hot Priest, with fans desperate to run to confession for rather sacrilegious reasons. It's not known publicly if Fleabag's Scott is single IRL. Scott's real love life is a mystery — and that's the way he would like to keep it.

For the 2019 Emmys, Phoebe Waller-Bridge's Fleabag has earned 11 nominations, including Outstanding Comedy Series. And all that success has only increased the scrutiny around Scott, particularly his personal life. And while the actor is hesitant to talk specifically about any of his romantic partners, he has been very open about his sexuality.

Scott is gay, and since achieving fame as Moriarty in Sherlock in 2010, he has talked about his sexuality with the media. But that doesn't mean his love life is open for discussion. "I am a private person; I think that's important if you're an actor. But there's a difference between privacy and secrecy, and I'm not a secretive person," he said in a 2013 interview with The Independent. "Really I just want to get on with my job, which is to pretend to be lots of different people. Simple as that."

He added, "The kind of actors I admire move through different characters and genres. That's the kind of actor I try to be. If you want that, you have to be circumspect about your private life." And since then, he has been rather circumspect.

In a 2015 interview with UK's Red Magazine, Scott said he lived with a long-term partner in London, but he was reluctant to give any additional details. "He doesn't have a normal job," Scott admitted after some pressing, but he clarified that his boyfriend wasn't an actor. He tried to tell the publication how no one cares about his love life before saying, "I think they start to care once you start talking about it. So I have a rule: I just don't talk about it at all." But, clearly fans cared back then and people are even more curious now after Scott's sexy turn in Fleabag.

Since his fame has grown since the release of Fleabag Season 2, Scott hasn't given any more information about his love life and whether or not he is still with his partner. But he did recently discuss how he has a problem with the way LGBTQ sexuality is oftentimes discussed in the media. In an interview for the October 2019 edition of British GQ, Scott described his issue with the term "openly gay." As The Independent reported, Scott said, "You're never described as openly gay at a party — 'This is my openly gay friend Darren,' 'She's openly Irish.' — It implies a defiance I don't feel."

With Scott's swoon-worthy role as the Hot Priest in Fleabag — and his upcoming role in another Amazon show, Modern Love — people are undoubtedly going to continue discussing his relationship status. Just don't expect Scott to budge on the subject.

More like this
Martin Hancock’s Wife Played A Key Part In His Return To 'Coronation Street'
By Catharina Cheung
Who Is 'Umbrella Academy' Star Elliot Page Dating After His Divorce?
By Jake Viswanath
Chrishell Stause & G Flip Have “No Rules Or Regulations” In Their Relationship
By Brad Witter
Ralf Little’s Fiancée Has A *Very* Impressive Resumé
By Sam Ramsden
Get Even More From Bustle — Sign Up For The Newsletter