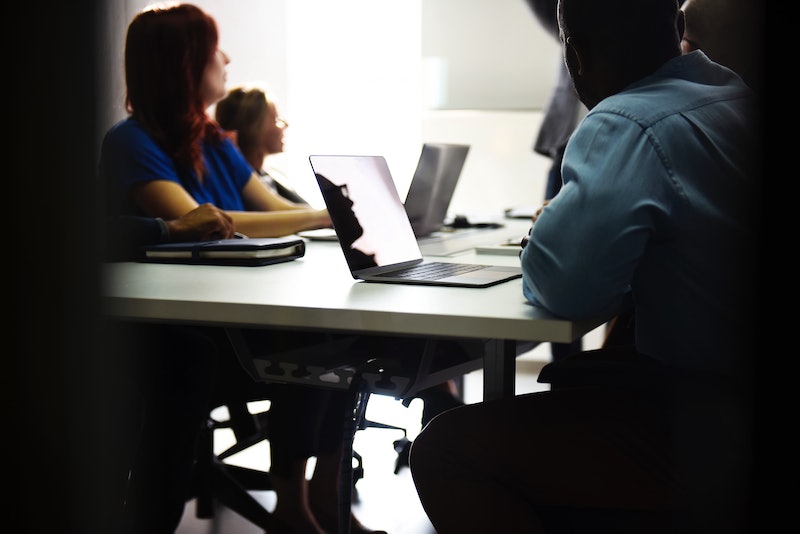 The only way to end white supremacy is to acknowledge it and take action, and that requires white people speaking out when they see racism, racial microaggressions, or other forms of injustice. In August, we saw the tangible consequences of unchecked white nationalism after the violence in Charlottesville, Virginia. It can be easy to feel hopeless about racial inequality in the U.S., especially for people of color, but there's some encouraging news out of Florida this week. Florida Gulf Coast University is allowing a course that will give students college credit as they learn how white supremacy was established and how it can be dismantled. The university is offering a course called "White Racism" for the spring 2018 semester, and the online reactions to the class show why it's so necessary. Bustle has reached out to both the university and Professor Ted Thornhill, who is teaching the course, and we will update when we hear back.

Essentially, people on Twitter are freaking out about the course, even though it shouldn't be a controversial topic. Per the school's course schedule search, the class will look at why white supremacy exists and how to challenge it. From the course description:

In this course, we will interrogate the concept of race; examine the racist ideologies, laws, policies, and practices that have operated for hundreds of years to maintain white racial domination over those racialized as non-white; and discuss ways to challenge white racism and white supremacy toward promoting an anti-racist society where whiteness is not tied to greater life chances."

TBH, I really want to know what's on the syllabus, even though I'm long graduated. Unfortunately, however, internet trolls were quick to take offense to the topic of the class.

The arguments against the class are as unoriginal as they are problematic. One Twitter user wrote, "FGCU is now offering a 'White Racism' course, but if they offered a 'Black racism' or 'Hispanic Racism' course the school would get shutdown," which completely misses the point of the curriculum and hints at "reverse racism," which isn't a real thing. Another Twitter user asked the school to instead create a 'Black Criminality' class, which not-so-subtly plays on the harmful stereotype that all Black people are criminals. A user who proclaims in their Twitter bio that they're anti-Islam wrote, "The attack on white people continues unabated!!"

The sad thing about all of this is the critics of the course are the same people who would benefit from the knowledge it'll provide. Consider that the school, located in Fort Myers, Florida, made headlines last year after someone wrote a threat with the n-word on a whiteboard. On Nov. 8, someone anonymously posted "It's ok to be white" signs all over campus, and the school had to take them down. The school has less than 15,000 students, but there have been a number of problematic incidents on campus, which may explain why Thornhill's class has been well-received by students. The school website shows the class as full, with 50 students signed up for the spring 2018 semester.

When the majority of white Americans think that white people face discrimination in the U.S., it's time for people to recognize what racism actually looks like and how it can be stopped. Research has shown that college students develop their political identities with the help of faculty members and peers, and thought-provoking courses are a powerful way to get young adults involved in the fight against white supremacy. Eventually, we might have a level playing field for everyone in the U.S., but that won't happen unless we encourage everyone to follow Florida Gulf Coast University's lead and have conversations that feel uncomfortable, both inside and outside of the classroom.