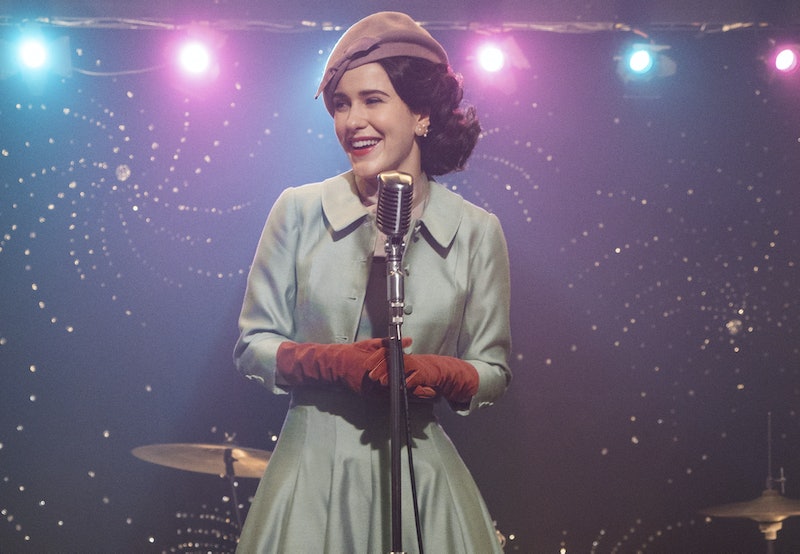 There's a scene early on in The Marvelous Mrs. Maisel Season 2 in which Midge, covered in mustard and drunk on martinis, trudges onstage and careens into one of her signature stream-of-consciousness rants. "The only thing I feel prepared to take on right now, this very minute, is those f*cking losers at the bar," she seethes, nodding toward the line of men who spent the night bumping her slot in favor of their own, and yet stuck around hoping to watch her bomb. "It's midnight on a Tuesday and the highlight of their evening is the possibility of seeing a chick fail."

She roasts each one of them accordingly, and then, Midge being Midge, she takes it a step further. "All comics are comics because something in their lives went horribly wrong. Something went to sh*t," she muses. "Men in general think they are the only ones who get to use comedy to close up those holes in their soul. They run around telling everyone that women aren’t funny. Only men are funny. [But] think about this: comedy is fueled by oppression — by the lack of power, by sadness and disappointment, by abandonment and humiliation. Now who the hell does that describe more than women? Judging by those standards, only women should be funny."

It's the most direct way Midge — and the show on the whole — has addressed the male toxicity that's long plagued comedy, and it's tempting to see this scene as an overt response to the ever-loudening #MeToo movement, which took hold a mere month before Maisel's Season 1 premiere, and that included several allegations against (and an admission from) one of the last decade's most prominent male comedians. It's surprising to hear, then, that according to its creators, the series is quite firmly and consciously apolitical — at least in regard to the current climate.

"You can't write a show toward a political agenda," creator Amy Sherman-Palladino tells Bustle at New York's Whitby Hotel, high above Manhattan on a blustery Wednesday afternoon. "People will sniff that out, and they will feel like they're being lectured to. Nobody wants to feel like they're being lectured to. It's political enough that we have a woman in the '50s trying to be a stand-up. We didn't need to add layers to that."

And yet, much in the way that Midge is intrinsically, if hesitantly, a feminist, Maisel, too, is inherently politicized. It is a show about a woman finding her voice in a time that tried its damndest to stifle it, airing in an era in which women must still demand that theirs be heard. The series may not be a reaction to the sexism that, 60 years later, continues to dictate modern power dynamics, but it certainly serves as a parallel for many of the struggles women face, and have historically faced, in their careers.

"[Midge confronts sexism in] the same way women today are still having to confront it. It’s a process; there's no endgame. The stand-up comedy world today is still sexist. It's not nearly as sexist as it was in 1959, but it's still not good," says Dan Palladino, Amy's husband and co-executive producer on the series. "Amy and I have both worked in comedy rooms where men have said, flat out, that women aren’t funny ... For a long time in our business it was, 'Well, the men write comedy, the women write heart.'"

For Midge, such preconceptions mean having to fend off repeated assumptions that she slept with Lenny Bruce, a big-name comedian she befriended after a few chance run-ins behind bars, and being constantly, unrelentingly, exasperatingly underestimated. After she nails a gig in the Catskills midway through the season, the venue's booker sprints backstage stunned and ecstatic. "You win!" he tells Midge's manager, Susie Meyerson, who assumedly had to all but buy him off to secure her client a space on the bill.

The gravity of this moment hardly registers with Midge, who is distracted for a reason too climactic to spoil here, but it's exactly this that makes Maisel's apoliticism so fitting. Like its main character, the show isn't out to make some grand, progressive statement so much as it is to simply tell a story — Midge's story — the story of a woman who triumphs even when the whole of the world is waiting to watch her fail — and who herself barely believes society will bend enough to let her succeed. Amid a TV landscape still woefully underpopulated by women, for The Marvelous Mrs. Maisel, and for Midge, merely existing is the most radical act.