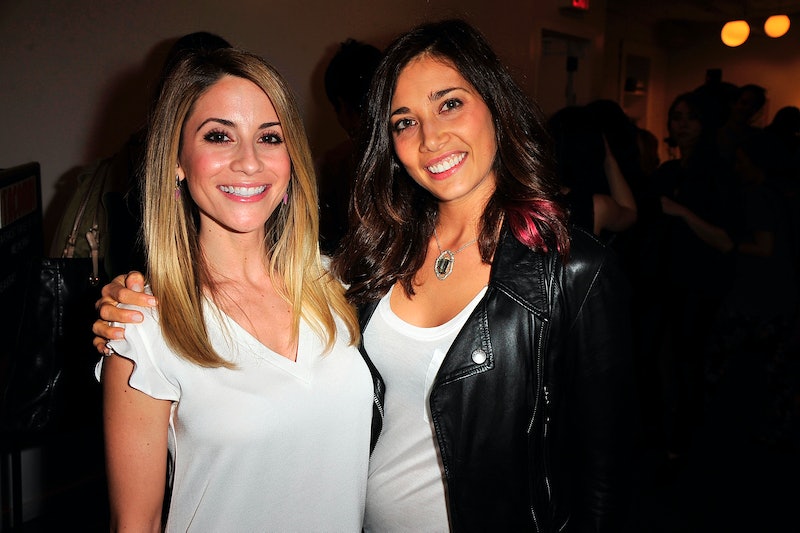 The Bachelor has peddled its brand of everlasting love since the show debuted in 2002. Sixteen years later, The Bachelor franchise is still operating in much the same manner it did when it premiered. The Bachelor is now a constant in American culture, but is its unchanging format a good thing? Given the uptick in controversial happenings on and around the show, former Bachelor cast member Ashley Spivey — who played a large part in uncovering Bachelorette frontrunner Garrett Yrigoyen's history of liking problematic Instagram posts and dug into Bachelorette contestant Lincoln Adim's recent indecent assault and battery conviction — tells Bustle that she thinks the franchise will have to do some changing in order to fit into today’s landscape.

Spivey appeared on Brad Womack’s season in 2011, before the show became so tied to social media. “People would approach me before I went on the show and maybe ask me to wear something, but that was as much as we got sponsored,” she laughs, calling it a "simpler time" in Bachelor Nation. She says she believes the fear of losing sponsorships keeps some contestants from criticizing the show. But Spivey has no problems speaking out against The Bachelor, or, well, anything.

She acknowledges that the stakes are lower for her than for some former contestants. "I’m not going on another show. I’m married. I don’t care about sponsorships, so I feel like I can [speak up]." But in today’s world, Spivey says, it’s imperative to speak out for what’s right — and in her opinion, the producers of The Bachelor aren't doing enough. “[Bachelor creator] Mike Fleiss is very liberal, and so are a lot of the producers that work on the show," Spivey says. "I know the way they feel about the way things are going in the world, and the fact that they’re not making a bigger effort to make sure that it’s not interfering with the show is disappointing.” Are they staying quiet to stoke the drama? Spivey says no. “I think they’re just missing how big social media is playing a part in the show now, and they need to figure out a new way of dealing with it.”

Current Bachelorette Becca Kufrin's season is a few weeks into airing, and there have already been two major controversies with her prospective suitors. After the season premiere, The Huffington Post reported that contestant Garrett Yrigoyen had allegedly liked a series of sexist, racist, and homophobic memes from his Instagram account. (He has since issued a statement apologizing for his actions, deleted his old account, and created a new one.) A few weeks in, blogger Reality Steve reported that contestant Lincoln Adim was arrested in 2016 and charged with indecent battery and assault after allegedly groping a woman on a booze cruise; Spivey quickly joined up with Reality Steve to confirm the scoop by calling the court. According to Life & Style, Adim was sentenced to one year in prison; this sentence was ultimately suspended, and he was given two years of probation.

Two major episodes in a few weeks suggest, according to Spivey, that the producers of The Bachelor could do more to ensure the safety of their own contestants. Her suggestion is a total overhaul of the way The Bachelor screens contestants. First off, she thinks a social media check should be mandatory. And if a contestant lies on their application — which Warner Bros., the company that produces The Bachelor, alleges Lincoln did regarding his arrest, according to People — that contestant should be held responsible.

“I can’t believe that they really think that someone in [Lincoln's] situation would be truthful," Spivey says. "Someone who is even accused of a sexual offense should not be on the show. Let that person get cleared if they are innocent, and then they can come on the show. Even if they are accused, it’s still not worth it.”

In a statement issued to TMZ, Warner Bros. said:

"We employ a well-respected and highly experienced third party who has done thousands of background checks consistent with industry standards to do a nationwide background check in this case. The report we received did not reference any incident or charge relating to the recent conviction — or any other charges relating to sexual misconduct."

"We are currently investigating why the report did not contain this information."

As for Garrett, he has so far been a frontrunner on Becca's season, which may be why ABC and the Bachelorette herself, acted so quickly to smooth over the Instagram controversy. (In an interview with E!, Becca asked that viewers "stay open and respect me but also stay open and respect these 28 guys that went along on the journey with me.") Spivey believes that although views like the ones expressed in the posts Garrett liked are hard to unlearn, it is possible to change the way a person thinks — just not in a week. “[On the show], they were talking about how Garrett and Becca’s values are the same, how he’s such a good guy," Spivey says. "That’s why I have such a hard time with it, because I can’t suspend my disbelief watching them fall in love. Because I’ve seen the things that he likes, and it doesn’t seem to be what she stands for."

"Don’t make the girl look stupid at the end by not doing the work you should be doing!"

Spivey makes clear on her Twitter account that — like many other Bachelor fans — she is an unabashed feminist. And while the show was a great escape from the stresses of the world for many years, its recent foray into controversy can be a turnoff for some fans. How does Spivey reconcile being a feminist with watching a show that is decidedly not?

"The closest I came to not watching the show anymore was during Kaitlyn Bristowe’s season," Spivey says. "I think they just did her so dirty." Bristowe slept with contestant Nick Viall during her season — before the Fantasy Suite dates where it's generally accepted that contestants will have sex — and she was raked across the coals on social media for it. “I think that women on the show just consistently get the short end of the stick,” Spivey continues, “and I will have a very hard time with the show if they don’t handle the Garrett stuff and the Lincoln stuff properly for the rest of the season. Don’t make the girl look stupid at the end by not doing the work you should be doing!”

Spivey, who also runs her own very successful book club ("reading is a form of self-care right now"), has recently partnered on a podcast with professional Bachelor spoiler Reality Steve. Regardless of whether fans love or hate Reality Steve for how much he reveals about every season, Spivey believes that he's making important efforts to change the conversation surrounding the show.

“I haven’t always agreed with him in terms of the way he wrote his columns," Spivey says, "but I think one thing that he’s been really great on is whenever I talk to him about things that happened to me in college in terms of being raped, he was very willing to learn how to talk to someone in those situations."

“I like that he’s giving women space to tell their stories, because The Bachelor hasn’t done it.”

For Spivey, that’s what it comes down to: letting women stand up for what they believe and share their experiences. Spivey is not just a former contestant on The Bachelor — she’s the face of a movement determined to change the show, and with it, the world.