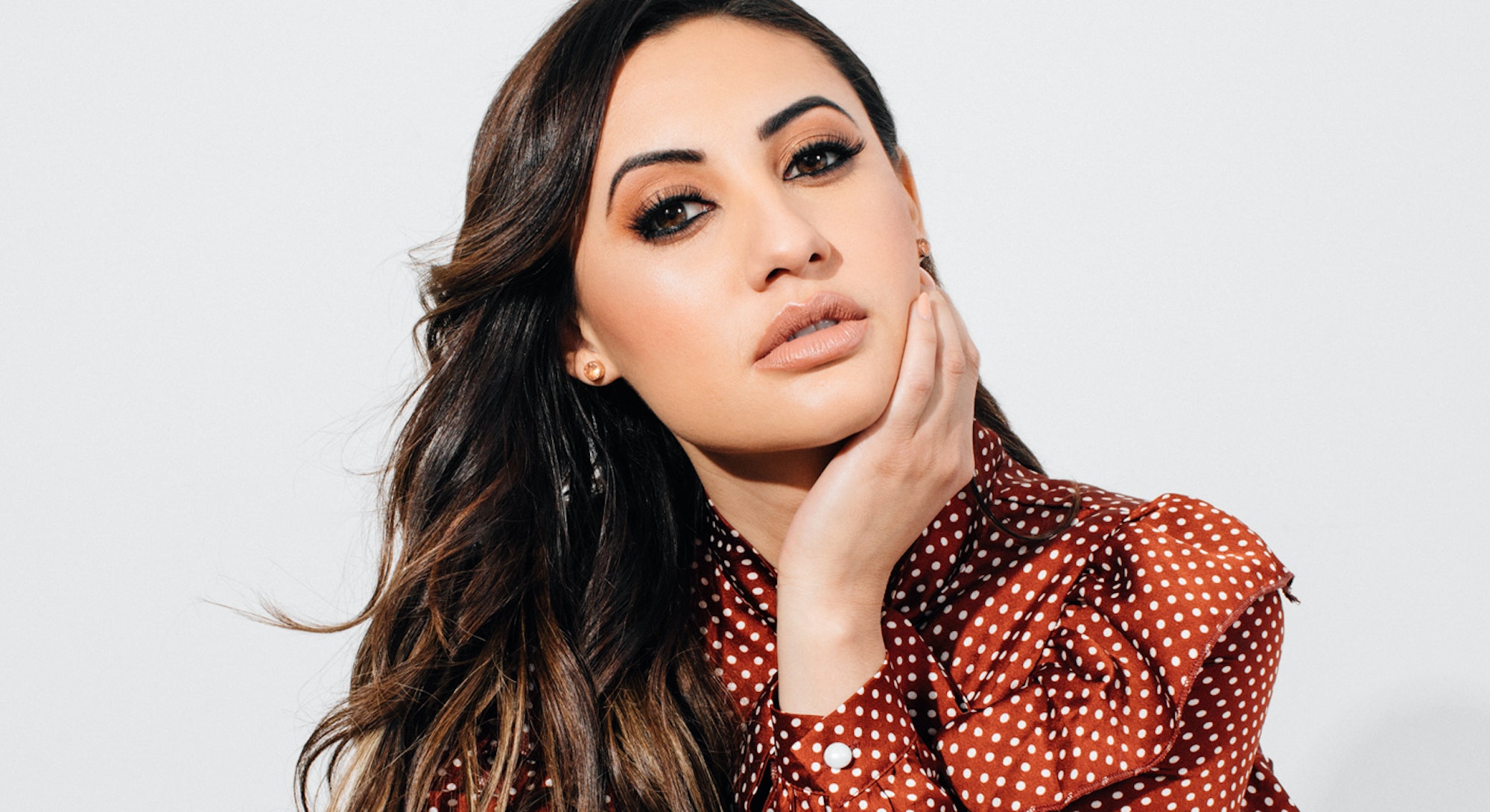 When it comes to breaking rules, Francia Raísa knows a thing or two. Sure, as we begin our phone conversation, she's a little iffy on how she'd define the term "rule breaker," but as we dive deeper, it's clear she's been challenging the status quo every step of her career. Raísa got her mainstream start as Adrian on Secret Life of the American Teenager. You may also remember her from Bring It On: All Or Nothing, the cheerleading movie with Hayden Panettiere and Solange. Nowadays, she plays Ana on Freeform's hit, grown-ish — a role she initially was told she was too old for.

Looking back, the 30-year-old remembers when she adapted to others' expectations because she so desperately wanted to "make it" in the entertainment industry. Luckily, she eventually threw that mindset out the window and started being herself, full stop.

And know where that philosophy got her? Starring opposite Tyra Banks in the much-anticipated Life-Size sequel, coming to Freeform this holiday season. Now Raísa is filming alongside one of Hollywood's most powerful women, while also taking on roles that redefine the way Latinx women are portrayed on screen. She's done succumbing to stereotypes, which makes her one of Bustle's 2018 Rule Breakers. Raisa talked to Bustle about shattering norms, standing up for herself, and creating her own definition of success.

Jamie Primeau: To start out, what does rule breaking mean to you?

Francia Raísa: I keep hearing the term, "Oh, I know this isn't normal, this isn't normal." Well, what is normal? Is there a normal? We're all different. So we're all rule breakers because we don't go off what is "normal."

Right now, I have a boyfriend, he's Black. And people are like, why aren't you dating another Mexican? Or another Latino guy? So I guess, in that case, I'm a rule breaker. Or even in my career — I grew up in a Catholic school and the industry wasn't even a thing in my school. I didn't go to college, and I didn't pursue a nine-to-five career. I went off and pursued something I wanted to do.

So it means being comfortable in your own choices and your needs and wants, and getting out of your comfort zone and going for it — in all aspects of life.

I don't want to wear tight, short dresses. I don't want to pronounce my name this way, because it is pronounced with an accent. Because I am Latina, and I'm very proud of it.

JP: Tying into that theme, were there any rules you were told not to break growing up, and did you break them anyway?

FR: Pursuing this career in general, it's really tough, and there are things that people told me not to do. For example, I was told one time that I should pronounce my name more Americanized.

There were things that people told me to do that, for a second, I was like, I'm not comfortable, but I went off what they told me. Because I was just so desperate to make it, I was willing to do anything.

JP: In your career, do you actively try to pick roles that go against the mold?

FR: Lately, yes. When I was younger, no... Any audition I've gotten lately, I really think about it, and I say, "OK, is this something for me? What can I do with this role?"

I don't think about, "Maybe I need this job because I'll finally make it." I'm not thinking about making it, because I'm very content right now. When I was younger, I wanted to be a series regular so bad.

But nowadays — I saw grown-ish, and I was like, wow, Kenya Barris, Yara Shahidi. black-ish made an impact on me. ... At the time [of the grown-ish audition], I was about to be 29. And I was told, even though you look the age, you can't play 18 anymore, because people know your age. I went against what people told me I couldn't do anymore. I wanted to be part of it so bad, I went for it anyway.

JP: What would you say is one unspoken rule in Hollywood that you’re dying to break or that you think should be retired?

I didn't even realize it until people started speaking about it. Actually, I had a situation one time. It was when Instagram was still fairly new and I booked a movie. It ended up not filming and I won't say any names, but I had way more followers than the male lead. ... He got offered more money than me. They were like, "You know, he's done a feature film that was in theaters" and all these stupid excuses.

And I was like, but if we go off followers, you could say that I'm more popular than him. What? I don't understand. And now I'm thinking back, and it's because he was a guy. And I didn't even realize how much of a problem that was. I'm pretty sure that's happened way more to me and I didn't even know it.

JP: Is that something now that you try to be more mindful of when taking on roles? And if you do notice that, do you speak up?

FR: I'm definitely speaking up a lot more, for sure. There [are] three things you don't talk about, I learned growing up: politics, religion, and money. Politics, everyone talks about now. Religion, obviously that's very open now. But money's still the thing that's like, "Ah, are we tapping that territory?"

What I'm doing, especially with a lot of newer actors who get opportunities on grown-ish — like Jordan [Buhat], who plays Vivek — I pulled him aside one day. I was like, "Hey, I made a lot of mistakes and I didn't have the right guidance. You should be doing this, you should be doing that, don't listen to this, don't listen to that. I'm probably stepping on toes, but I don't want you to experience what I experienced."

FR: You have to help your peers, you really do. Because I just don't want anyone to go through some of the downfalls that I went through. They're very painful and they're very hard to come up from. I'm grateful, because it made me the woman that I am today, but I think, especially on this movie [Life-Size 2], I'm really learning what it means to be a leader by watching Tyra [Banks]. She is an incredible leader. I'm so amazed at the way she carries herself.

JP: Who’s one person in your life who really motivates you to chase your dreams and not be afraid to push limits or break barriers?

FR: I would say my mom, because she never really got to pursue her dreams. My mom grew up in Mexico, and my grandfather is very old-school. He told her she wasn't allowed to go to school. She had to work at the farm and take care of the pigs — that was her job. So my mom somehow would sneak off just so she could go to school and then get an education.

My grandfather told her she couldn't work, and then she married a man that said you can't work. Her job was to raise me and my sisters, and just kind of drive us around to our dance classes and our karate classes and school and everything.

She constantly had people, especially men, tell her, "No you can’t, you're a woman." She's the one that’s like, “Yeah, you can, don't let anyone tell you otherwise."

JP: You just turned 30. So what are some of your biggest bucket list items? And does starting a new decade give you some extra motivation to go after those goals?

FR: Yeah, things just aren’t as big of a deal to me as they were before in my 20s, where I thought the world would end if I didn’t do this, or [if] I didn’t go to this party and hung out with so-and-so. I just don’t care anymore.

When I first started in the industry, I wouldn’t go out of town, because I was too afraid to miss anything — an event, an audition, anything. And now, I’m 30, I’m like, "I have not traveled. What is wrong with you, Francia?" So my bucket list, honestly, is to appreciate and enjoy life more. To travel a lot more.

JP: How would you say overall that the rules you have broken — in your personal life, in your career, everything — have impacted where you are now?

FR: I’m the happiest I’ve ever been in my life. There were so many people that told me I couldn’t do something, or I should do this, because I’m that. And by “that,” I mean Latina. "You are Latina, so you need to dress a little more provocatively." "You need to figure out a Mexican accent." "You can’t do this, because you’re a woman." "You can’t do that, because you’re whatever." And I’m like, what?

I have a lot of pain in my life, just like any other person, but I’m a boss, and I’m just finding my way.

There aren’t a lot of leading roles for Latinas, and I just nabbed another one with Life-Size. And I’m not playing this poor, Hispanic girl with a broken family, who is trying to make it. No, I’m this CEO of a company. I have a lot of pain in my life, just like any other person, but I’m a boss and I’m just finding my way.

I think the more that we start booking these lead roles and showcasing that I’m not just playing a Latina — I’m playing a woman, I’m playing a girl turning into a woman — it kind of opens the door for a lot of other people.

And going off that whole “I know this isn’t normal” thing [from earlier in our conversation]: A lot of people start a sentence that way and talk about a quirk that they have. I really want to encourage people to stop giving themselves disclaimers about who they are and what they want. What you want and what you need is what makes you, you. It’s what makes you an individual, and it’s what makes you interesting.

And there is no “normal.” I don’t even know what that means. Whatever people say is “normal,” is whatever society made up in their mind. So as far as rule breaking, stop making disclaimers for yourself and just be you.