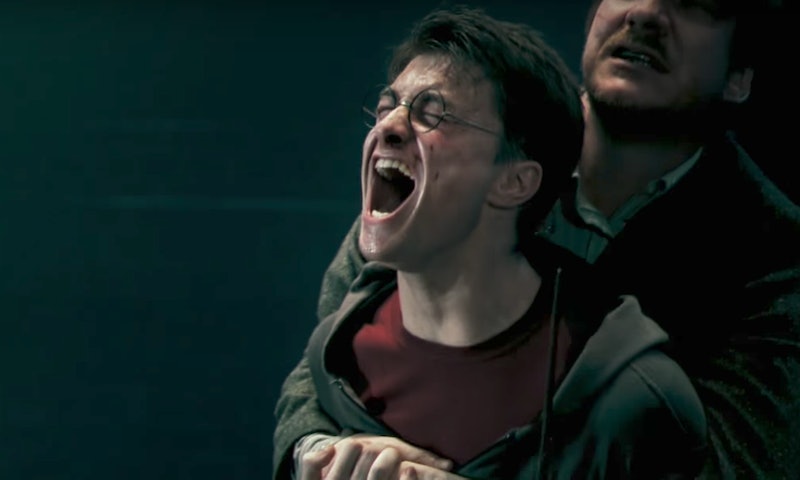 If you will be busy with work, school, going out for happy hour, running errands, sleeping, perusing the fan forums for your favorite reality show, or whatever else people do on Fridays, fear not: the marathon will start over on Saturday at 7 a.m. The Scary Potter extravaganza will continue (with some breaks and replays) through Monday evening. So, don’t let the date fool you: this Friday the 13th isn’t just a day. It’s an entire weekend. Point being, there are lots of chances to catch your favorite eight-part movie series about the Boy Who Lived over the next few spooky days.

You can check out Freeform's Scary Potter weekend promo below.

Wherever Friday the 13th villain Jason Voorhees is, he is almost certainly shaking a machete at the sky right now. “Wait, but this is my weekend," he's probably whispering into his filthy, blood-spattered hockey mask. "Harry already gets marathons multiple times a year, couldn't this one happen on a different weekend? Couldn't he just let me have this one? Harry has his own theme parks, for Freddy Krueger's sake. Does he have to have my Friday, too? Why does he get everything?” But before you feel bad for this fictional character, remember: Jason is literally a serial killer. Also, there's a Friday the 13th marathon this weekend, too. OK, that's enough of that weird digression.

Back to the Scary Potter stuff: In addition to the marathon, there's even more Harry Potter content to chew on this upcoming Friday the 13th weekend. According to Freeform's programming schedule, there will be a special called Tom Felton Meets the Superfans at 12:30 a.m. on Sunday. Felton's not just meeting the superfans; he's at the helm of the feature, too. Yes, the 2015 documentary about people who are diehard pop culture fans was directed by the actor who played Draco Malfoy in the Harry Potter film franchise.

Per the BBC's description of Tom Felton Meets the Superfans,

“From Wizard World to the streets of New York, from Comic Con to behind-the-scenes action, Tom takes viewers into the reality of his world. He spends an evening with 20-year-old Brian from New York, who dedicates most nights to tracking down his favourite stage and screen stars for a selfie. He meets 26-year-old Steve from Pittsburgh, the self-proclaimed world's biggest Harry Potter fan, who has turned a basement into his very own Hogwarts."

Frankly, any basement that hasn't been transformed into a mini Hogwarts is a wasted opportunity. The summary adds,

Wait. Daniel Radcliffe, Rupert Grint, and JK Rowling are in this doc, too? Wingardium Levi-yes-a.

Buckle up, Muggles/No-Majes, witches, and wizards, for it's going to be a Potter-tastic weekend over on the ol' Freeform. Thanks to horror show characters like Dolores Umbridge, the dementors, Aragog, Bellatrix Lestrange, and, of course, He Who Must Not Be Named, this Scary Potter weekend will surely live up to its name. Merry Scary Potter weekend to all — especially to Jason Voorhees. He probably needs it the most.