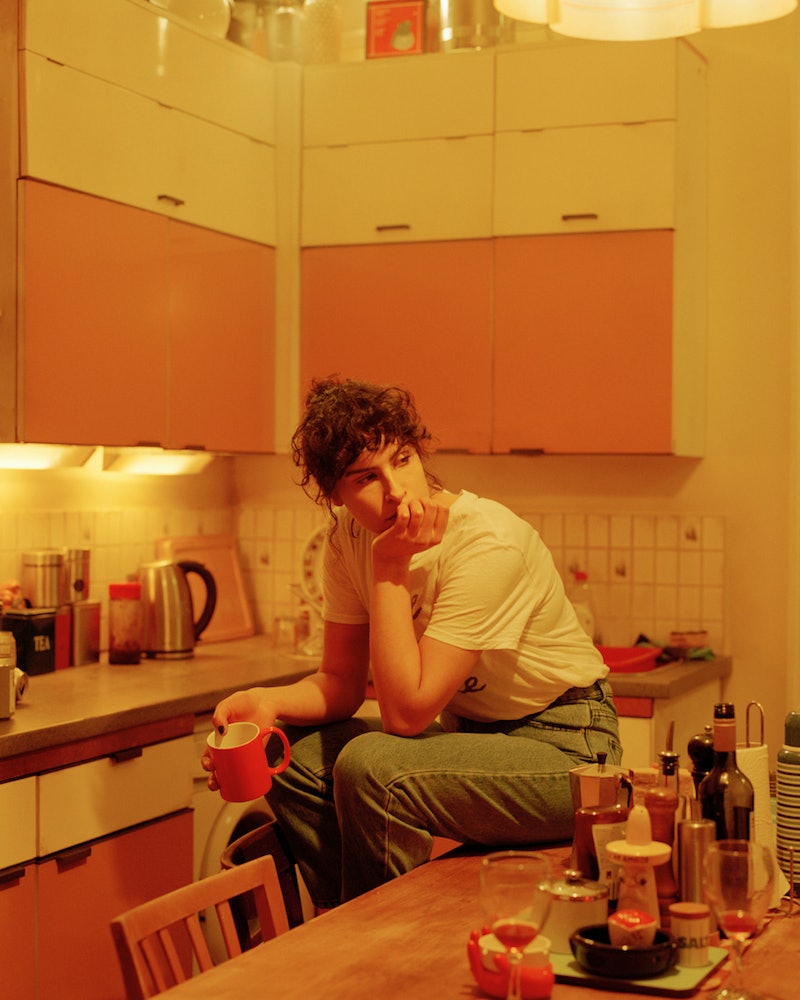 It's 2018 and there's a new show on Hulu called The Bisexual. And not only does its title represent a historically underrepresented group — the series as a whole shows how far we still have to go as a society to understand and accept bisexual people. Biphobia in the real world and on TV is commonplace. And that can make bisexual people internalize hatred for who they are, for not being able to just "pick a side."

When I figured out I wasn't straight, I genuinely didn't know that being bisexual was an option. I thought you were gay or you were straight. Since I knew I wasn't 100 percent straight, I decided that must make me gay. I came out to my friends and my family as a lesbian. It was actually through watching Brittany's bisexual journey on Glee that I learned you're allowed to like both men and women. Well, allowed, yes. Accepted for that? Not always.

Our society is becoming increasingly accepting to the LGBTQ community in real life and on TV. We have a new Queer Eye reboot that's about fighting for acceptance, not just tolerance. The government has elected several LGBTQ congresspeople. Gay marriage is legal and 67 percent of American people approve of that, according to USA Today.

But there's still a long way to go for many people in the LGBTQ community. While gay men and lesbians have seen increased acceptance and representation in media (men more so), other parts of the acronym are not as supported. The "B" in LGBTQ is frequently marginalized by straight people and gay people alike.

The Bisexual gets into this problem in the very first episode. Leila (the titular bisexual) is with her lesbian friends as they berate their friend Beth for bringing a "straight" girl to the club. Beth insists that her date is bisexual, which all the other women scoff at. "Does anyone know an actual bisexual?" one asks. Leila, who hasn't come out yet or possibly hasn't even really registered her bisexuality within herself, answers that bisexuality is a "myth created by ad execs to sell flavored vodka."

"For some reason, hearing that word [bisexual] made my stomach flip, in a non-fun way. And I wanted to explore that."

Even a few episodes later, when Leila has started dating a man, she still struggles with labeling herself as bisexual. Her reasoning will hit home for bisexuals everywhere. "When I hear bisexual, I think lame slut. It’s tacky, it’s gauche, it makes you seem disingenuous. Like your genitals have no allegiance, you know? Like you have no criteria for people, just an open door policy."

I'm a decisive person and have long prided myself on that. So when I realized I was attracted to both men and women, I was angry at myself. Why couldn't I just choose? Why was I making things so complicated? I had and still have internalized biphobia. So did Desiree Akhavan, who created The Bisexual and stars as Leila. It's why she wanted to make the show.

She explained to The New York Times that early in her career as a filmmaker, she started to be referred to by her sexuality — and she didn't like the word people were using. "I heard myself described as 'the bisexual' at every other introduction. 'The bisexual filmmaker,' 'the bisexual Iranian-American,' 'the bisexual Lena Dunham,'" Akhavan said. "For some reason, hearing that word made my stomach flip, in a non-fun way. And I wanted to explore that." She added that she once also struggled with guilt over "not feeling gay enough."

I can understand that struggle with imposter syndrome over your sexuality. Sometimes I have to sit and remind myself that I have had relationships with women, and they were real, and that makes me a real gay woman. Because of the stigma women in particular are willing to experiment in college or kiss their female friends when they're drunk, I've never wanted to be one of those people who proves that stereotype right. I don't want my bisexuality to be a phase, because I want to show people that it's legitimate. Even if no one — whether that's my family or people on TV — takes that seriously.

When Blaine was still trying to figure out his sexuality, Kurt angrily told him that "bisexual is a term that gay guys in high school use when they wanna hold hands with girls and feel normal." Later on, after Brittany (who's bi) and Santana (who's a lesbian) break up, Santana meets a new girl who proclaims herself to be "100 percent sapphic goddess." As in 100 percent a lesbian — unlike Brittany. Santana is thrilled and says, "I finally have a girlfriend who I don’t have to worry about straying for penis."

That same rhetoric is shown in Grey's Anatomy. Not only did Arizona (who's a lesbian) initially reject Callie (who's bisexual) because she didn't want to be one of the first women Callie dated after dating men, but Arizona was consistently judgmental about Callie's bisexuality throughout the show. When Callie's father got upset about Callie dating women, Arizona blamed Callie. "You dated men your whole life. You loved men. You even married one," Arizona told her. "And all of a sudden, you’re a whole new girl. So cut [your father] some slack." Um. No. Callie's sexuality is just as valid as Arizona's, and she didn't need to grow up only liking women to be respected.

Arizona also referenced the stereotype of there being "two sides" of a bisexual person — a straight side and a gay side. "[Mark] gets most of you, the straight you," Arizona told her. "I just get, you know, the gay you — which is really only about 20 minutes a night."

Guess what? Bisexuals are gay all of the time and straight none of the time. Being attracted to the opposite sex doesn't erase the fact that you're also attracted to the same sex. Leila comes up against this in The Bisexual as well, when the guy she starts seeing tells her she's "not fully" gay.

It's not the only stereotype Leila has to fight against. She also has to explain to her ex-girlfriend Sadie that she didn't "suddenly" turn to men because she wasn't satisfied by Sadie. Leila also has to deal with a guy thinking she was only hooking up with him because he looked feminine.

Then she has to contend with her roommate Gabe implying that she's lucky she doesn't need to "lock herself down" in a relationship because bisexuals are attracted to everyone. "You think because I’m bisexual, I can f*ck any person I meet?" Leila retorts.

And when Sadie suggests that Leila "will never be fully satisfied" in a relationship with one gender because she likes both, Leila has to explain that she can be monogamous — being bisexual just means she can find that monogamy with either men or women.

These are issues and stereotypes that bisexual people face in the real world too. Westworld star Evan Rachel Wood has long been advocating for her fellow bisexuals, using her Twitter as a space to help educate the masses. When someone once asked her if being married to a man made her not bisexual anymore, Wood explained that it just made her not single anymore.

According to the Williams Institute on Sexual Orientation and Gender Identity Law and Public Policy, about half of all queer individuals identify as bisexual. They make up one of the largest parts of the LGBTQ community. And yet, they're misunderstood and stereotyped not only by straight people but by their own community. Bi people can be treated by other gay people as "not gay enough" or can be rejected because a gay person is worried that they'll just "turn straight" again.

Shows like The Bisexual are vital to dispelling these myths and advancing representation. When Leila explains to Gabe why she doesn't like the word bisexual, she mentions how few real-world examples of bisexuality there are. "When you hear bisexual you think like Tila Tequila. You think Anne Heche," she says. "Who?" asks Gabe. "Exactly. There's nobody. There's no precedence," Leila says.

While there are a few more examples than just those two, the point Leila's making is still important: There aren't a lot of examples of bisexuality in the real world, or even in the fictional world of TV and movies; when there is representation, it's often negative. There isn't even a lot of use of the word bisexual, which makes it seem more shameful the less it's used. Because of all this, it's not always easy to be bi and proud. Thankfully, The Bisexual is helping change that, and for the first time in a long time, I feel seen.