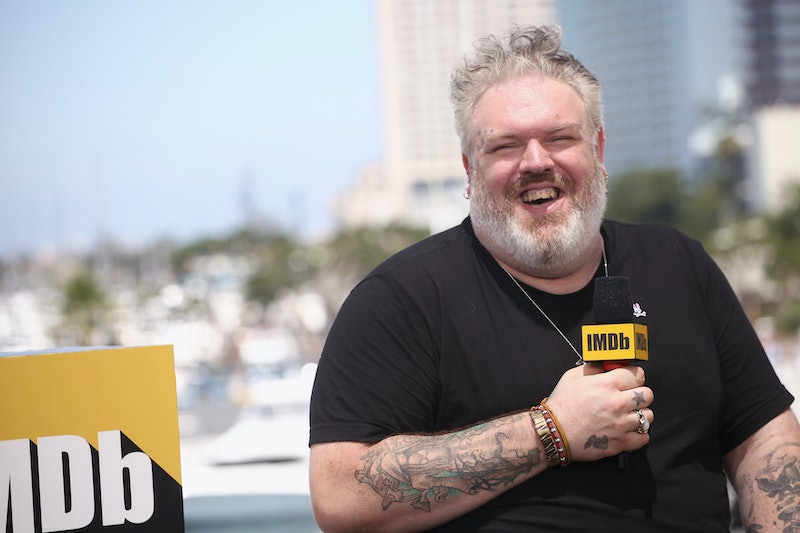 The only thing better than Game of Thrones actors acting like bonkers fans for each other is when they act the same way for the show. For example: Fan theories. Even the show's stars have them! In fact, Game of Thrones actor Kristian Nairn's theory about Hodor and the Clegane brothers is actually one of the better — and more subtle ones — one of the series performers has presented so far.

As the actor and DJ told British magazine SFX:

A theory I had, being a big guy, maybe he was another one of the Clegane brothers, and something happened to him as a child, like it did with the Hound, having his face burnt, which made him the way he is.

Fansite Winter is Coming points out, that's not such a wild idea. Think about it — Hodor is the only other human character in Game of Thrones whose size mirrors that of Sandor and Gregor Clegane. Ser Gregor, better known as "The Mountain That Rides" (later shortened to "The Mountain") is famously, er, violent. That's why Nairn thought perhaps he had something to do with Hodor's condition! Now there's an idea that might have changed the course of things. Fan fiction writers, if you're listening: Please, get on this alternative history. It practically writes itself.

In both the series of books and the television show, the Hound reveals that his terrible burns and intense fear of fire stems from a childhood encounter with his brother. Simply put: The Mountain held his brother's head against a fire to punish him for having possibly played with one of his toys. (If you just shuddered with recollection, that's understandable. It's just one of many horrifying backstories provided to fans by the totally normal and not at all bonkers author George R. R. Martin.)

Had the Cleganes had another large, good-natured brother for the Mountain to harm, it stands to reason that after an incident significant enough to stunt Hodor's intellectual capacity, a family of their means might have arranged for him to be taken away. It's about as tragic as the real story. You know, how the Starks had a young and fully-functional Willys in their employ as a stableboy until Bran warged back in time and... never mind. It's still too soon to discuss it. At any rate, the elder Clegane brother was always sadistic and unpredictable, and these two things the Hound and Hodor are not. They're both victims of circumstance.

It would definitely be interesting to imagine a Westeros in which Hodor was truly a Clegane. At first, it might take some of the mystery away from the gentle giant of a character, but it would add a lot of nuance. Picturing a world in which the three brothers Clegane were split up, eventually following unique (but intersecting) paths? That would certainly add depth to the Hound and Hodor. Maybe not the Mountain so much, but he ends up a hexed, undead puppet of Cersei's, so the extra brother element wouldn't have done much for his storyline. The knowledge that for a time, the Hound and his brother, though separated, both ended up taking care of Stark children? That would have hit fans right in the feels. It could have been a neat way to weave a little added heart in to the Stark family saga, to prove that the kids didn't take such different paths after all. Of course, that's not the case. But this is where fan fiction enthusiasts come in!

Sadly, it's been years since Kristian Nairn has appeared on Game of Thrones as Hodor, and unless Game of Thrones Season 8 goes the flashback route, he's likely wrapped his role on the show for good. If you still need your Hodor fix, though, you might be able to catch Nairn in person! He tours the world as DJ Hodor, and it sounds like — contrary to his role on the show — he definitely has a lot to say.