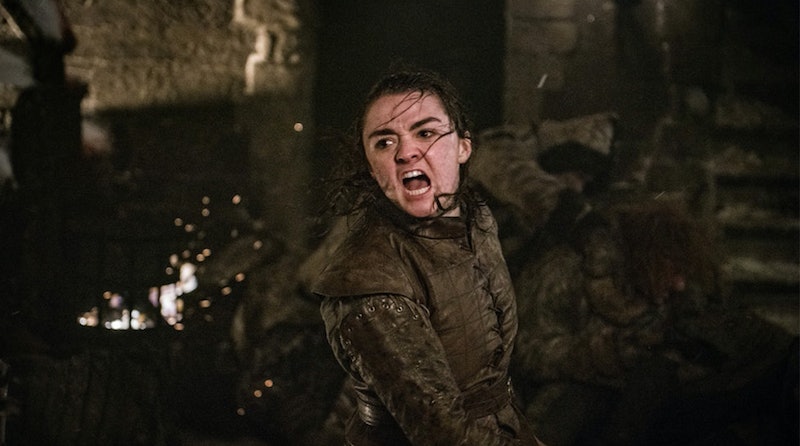 In news which will probably surprise no one, but which is still worth examining, Game Of Thrones-inspired baby names are on the rise or the umpteenth year in a row — especially for girls, and especially when it comes to two of the hit HBO series’ characters in particular. As Valeriya Safronova pointed out recently in the New York Times, Arya and Khaleesi remain two of the most popular Game Of Thrones-related baby names — so much so that they’ve made it onto the Social Security Administration’s list of the top 1,000 baby names in the United States for several years running. And honestly, it’s no wonder; no matter who you think should end up on the Iron Throne at the end of the series, fans have been rooting for these two characters consistently throughout the entire run of the show.

Truthfully, the overall trend is far from new; reports that Game Of Thrones-related names are on the rise for new babies have been circulating since the show’s first few seasons. Indeed, in 2013, when the Social Security Administration released its annual report on baby name data for 2012, it became quickly apparent that the first two seasons had already begun to inspire new parents all over the country: Arya ranked at 711 in the list of top 1,000 baby names for 2011, but jumped all the way to 413 in 2012. (Season 1 of Game Of Thrones aired from April 17 to June 19, 2011, while Season 2 aired from April 1, 2012 to June 3, 2012.) It took Khaleesi a few more years to break the top 1,000 — it didn’t arrive until 2014, when it ranked 757 — but it got there eventually. These two names have continued to be among both the most popular and fastest rising baby names in the United States, with Arya ranking 135 in 217 — the year of the SSA’s most recent dataset — and Khaleesi coming in at 630.

But the fact that the trend has not only continued, but also steadily picked up steam over the course of the show’s entire run — and that the standout entries are names belonging to women — remains notable. And it’s not just because Game Of Thrones has become a worldwide phenomenon; it’s because of the reasons parents are choosing the specific Game Of Thrones-inspired names they bestow upon their children. For her New York Times report, Safronova spoke to a number of parents who have named their kids Arya and Khaleesi — and there’s clearly a running theme in the responses she received: To many women, these two characters are the pinnacle of strength and self-confidence. Said Marina Lippincott, a longtime fan of both the A Song Of Ice And Fire book series and its television adaptation who named her child Arya, said, “Arya knows who she is and that’s who she wants to be. She goes and gets it. Nothing stops her — not even that she’s a small girl.” Meanwhile, Jamie Chang choose the name Khaleesi for its association with Daenerys Targaryen’s strength. “[Daenerys is] definitely a woman who knows her power, knows what she wants,” Chang told Safronova.

This is what many of us want for our children — particularly for children who are being socialized as girls: We want them to know who they are, to know what they want, and to not let anyone tell them they can’t have any of it simply on the basis of their gender.

More broadly, even if other Game Of Thrones-inspired names haven’t yet been given to enough children to place them on the Social Security Administration’s annual top 1,000 list, interest in those names also been growing for the past eight years. Each year, online baby name databases such as those run by Baby Center and Nameberry release reports on the most popular names on their sites for that year — and although these reports aren’t based on the number of babies given those names, they are based on the amount of attention those names have garnered from the sites’ users. As such, they still reveal some interesting information about where we’re at as a culture and what we want for our children.

Based on trends seen in 2014, Baby Center predicted in 2015 that other names connected to the HBO series could continue to see a boost, among them Daenerys and Tyrion; then, in 2016, Baby Center found the trend to be holding steady: In addition to Arya, which took the number eight spot for that year’s top 10 baby names list, Sansa and Brienne both increased in popularity — 46% in the case of Sansa and 4% for Brienne. Meanwhile, Nameberry has been predicting increasing popularity for both Sansa and Brienne for several years, as well.

Still, though — Arya and Khaleesi remain by far the most widely used Game Of Thrones baby names. So far in 2019, Baby Center ranks Arya at number 73, while Khaleesi takes the 505th spot; Nameberry’s data places Arya at 457 and Khaleesi at 303; and according to the Social Security Agency’s most recent data, which dates to 2017, 2,156 babies born that year were named Arya, while 466 babies born were named Khaleesi. The SSA tends to release their baby name reports for the previous year in May of the following year, too, so we’ll soon know whether those trends have continued for 2018 — and whether any other Game Of Thrones names have entered the top 1,000 in the meantime as well.

Could bearing the name of a well-known fictional badass be something of a burden to a kid? Sure. But the names we choose for our children so often represent what we hope for them — and honestly, there are worse things to hope for your children than strength, self-confidence, and capability. I’ll raise a salute to that — Needle held at the ready.

More like this
'Obi-Wan Kenobi' Takes Place After This Key Star Wars Movie
By Arya Roshanian
Everything To Know About Marvel’s 'Thor: Love And Thunder'
By Grace Wehniainen
Everything To Know About Marvel's 'Echo' Series On Disney+
By Grace Wehniainen
What Does Doctor Strange’s Third Eye Mean?
By Arya Roshanian
Get Even More From Bustle — Sign Up For The Newsletter