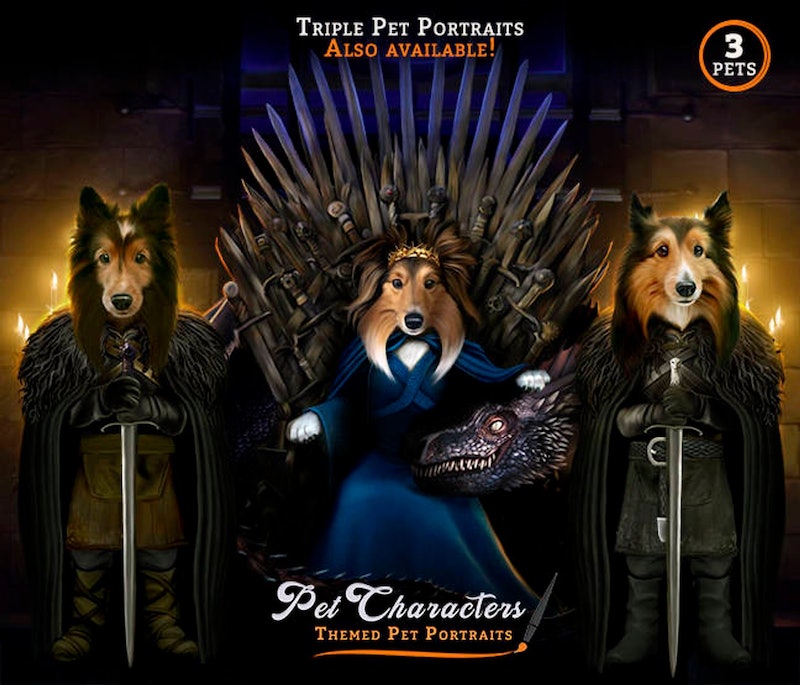 PetCharacters/Etsy
By Lucia Peters
May 1, 2019

I can’t be only one who’s ever thought that the… uh… distressingly large number of terrible monarchs we’ve seen on Game Of Thrones over the years could stand to learn a few things about leadership from my cats, right? Well, if you’re in that same boat, good news: You can get a custom-made portrait of your pet sitting on the Iron Throne that will show Cersei Lannister, Robert Baratheon, Aerys Targaryen, and all the rest of Westeros’ truly awful rulers exactly what real royalty looks like. Created and sold by the Etsy shop PetCharacters, these portraits are both absurd and wonderful — and, of course, perfect for any pet lover who also has a great deal of emotional bandwidth invested in Westerosi politics. Just, y’know, in case that Iron Throne pet bed we looked at recently wasn’t enough.

Based out of Raleigh, North Carolina, PetCharacters specializes in pet portraits, with a particular emphasis on images that portray your animal pals as fictional characters from movies and television shows. Its proprietor, Kerri, is both a traditional and digital artist; her degree is in Computer Animation, but she’s skilled in a wide variety of areas, including character concept art, photography, graphic design, and (of course) digital painting. A pet lover herself — she has a Yorkie named Templeton, a German Shepherd named John Lennon, and a cat named Josey, according to her About page — as well as a film and TV buff, her shop brings together all of her interests in one delightful package.

The Game Of Thrones pet portrait features the Iron Throne as its focal point, with your pet posed upon it dressed up as one of three characters from the book and television series. You get to choose which one; your options are Daenerys Targaryen in the blue dress she wore for much of the series' middle seasons, Tyrion Lannister in a red jerkin with his Hand of the Queen (or King, depending on the season) pin, and Jon Snow draped in tons of furs with Longclaw at the ready. You can also include your pet’s name (with or without an honorific — so, hey, if your pet considers themselves a knight of the highest order, you can recognize them here with the appropriate title of “Ser”) and their House designation (e.g. your own last name) at the bottom of the portrait, if that’s your jam.

To create the portrait, Kerri will first ask for a photograph of your pet’s face “in good lighting and with the pet looking into the camera.” You can send this photograph to her as an attachment either through an Etsy Conversation or via email (her email address is included in each portrait’s shop listing). She’ll then reach out to you so you can start the collaboration process; ultimately, though, what she’ll do is digitally paint and composite your pet as the character of your choice, using the photograph you provided as a reference. Each portrait comes as an 8x10 print, although you can also opt for a digital-only copy instead. Options also exist to upgrade your portrait to a larger, 11x14 size — and if you get a portrait that depicts more than one pet, you’ll automatically get a free upgrade to the larger size.

Oh, did I mention? If you have a house full of pets, you can get an illustration of up to four of them positioned around the Iron Throne. One of them will be sitting on the throne, while the others will flank it. This version also shows a bit more of the throne room detail; two giant candelabras are visible on either side, while the big ol’ window positioned behind the throne in the actual King’s Landing throne room frames the treacherous seat.

Is Game Of Thrones not your thing? No worries; PetCharacters has plenty of other pop culture-themed pet portraits available, including Star Wars, Star Trek, and Doctor Who. Or, choose from a number of other, non-pop-culture-related options, like this rock star character, this pirate pick, or this furry little astronaut. Depending on how busy Kerri is, she might even be able to create a custom character for you. (This is dependent on a number of factors, though, including the details of the project and the time of year. For example, per her shop FAQ, she doesn’t do custom characters during the winter holiday season, as the order volume she receives at this time of year is too high.)

Check out more over at the PetCharacters Etsy page. And remember — in the Game of Thrones, you win or you meow. Or woof. Or maybe chirp.