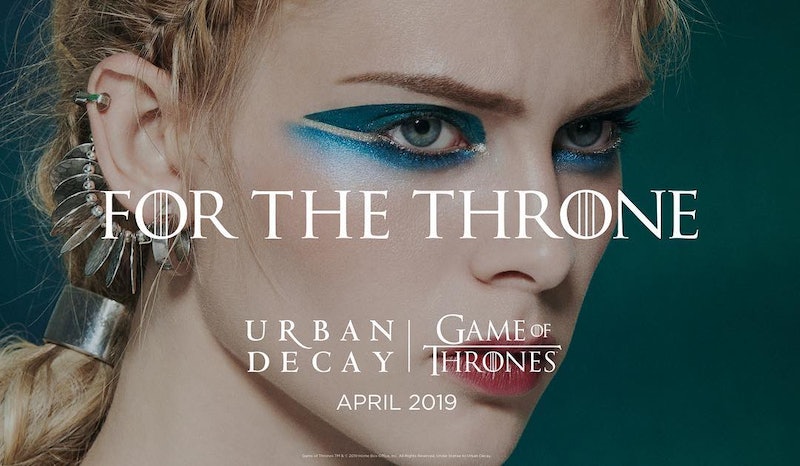 Winter isn't coming, but an Urban Decay x Game of Thrones collection is. The iconic HBO series, which is set to enter its last season in April 2019, and the creator of the brand responsible for the OG Naked Palette are teaming up to bring fans of the series a makeup collection that looks like it's going to be fire — and ice.

On Friday, Nov. 22, Urban Decay posted two teasers for its upcoming collaboration. The first was a photo of a blonde model wearing some seriously fierce graphic blue eye makeup. The look is more than likely a play on the running theme of fire and ice in the show. The second teaser was a video montage of, what else, fire and ice that culminated in a gorgeous, bronzed gold eye look on another model. At the end, viewers were given the same hashtag the show is using for the final season, #ForTheThrone, as the official theme of the show was playing in the background.

Unfortunately, a glance at the types of makeup looks shoppers may be able to create is the only information fans received. While many commenters on the Instagram teasers were hyped, the only real detail given by the brand is that the collection is coming in April 2019. There were no details regarding what's actually inside the collection.

Bustle reached out to Urban Decay for comment on the collection. The brand stated, "Urban Decay has partnered with HBO to create the Urban Decay x Game of Thrones collection, inspired by UD’s favorite places in Westeros and the strong women of the Seven Kingdoms. We are excited for this partnership and look forward to sharing more details in the coming months."

Like the television show, it seems that fans will need to wait until April to see what Urban Decay and Game of Thrones have created together.

If you can't wait until the anticipated April 2019 launch, however, don't worry too much. Game of Thrones is, after all, one of the most popular series to grace television screens, garnering both loyal fans and critical praise. There's plenty of existing Game of Thrones merchandise to shop.

While not cosmetics, these golden makeup brushes inspired by the houses of Westeros will help you put your makeup on Khalessi-style until the Urban Decay x Game of Thrones launch.

If you want some official merch from the series, HBO has you covered. This T-shirt inspired by the names of the Stark children's direwolves will have you missing those furry friends.

If you're okay with a splurge, you can snag this dragon pendant for a cool $500. It's not just any necklace, though. These designs were created by Game of Thrones costume designer Michele Clapton and directly inspired by the show and its Mother of Dragons.

While the Urban Decay x Game of Thrones collection may not be available until April 2019, it doesn't mean you can't show your love for the series and its fandom before then. Whether its makeup brushes or clothing, there's more than enough Game of Thrones gear to go around.