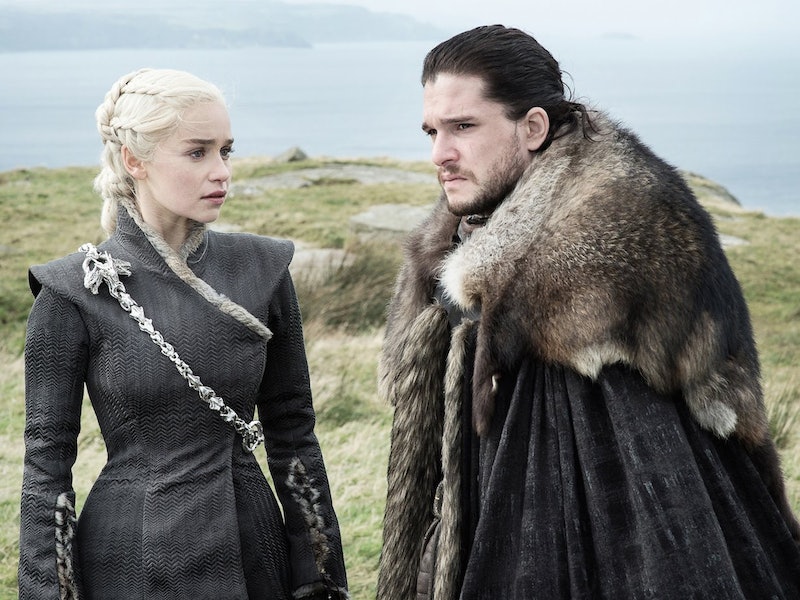 It's hard out there for a Song of Ice and Fire fan. Sure, you might watch Game of Thrones season seven. You might even enjoy it, because it's pretty hard to argue with such a large concentration of hot people and dragons. You definitely have your problems with it (and you've probably ruined at least one Sunday night with your constant refrain of "that's not what happens in the book"). But, mostly, the show is just inescapable. Everyone is watching it, or bragging about how they don't watch it. Everyone is talking, tweeting, and blogging about it. And all of it is a huge, painful reminder that George R.R. Martin still hasn't finished The Winds of Winter. But rather than mope about it, let's look at the things that season seven of Game of Thrones can tell us about the next books in the series (if George ever finishes writing them).

Firstly, as all you nerds know, the timeline of the TV show has surged well past the timeline of the books. Plots have diverged, characters have been rewritten, and entire arcs have been discarded entirely (R.I.P., Lady Stoneheart). The HBO show was set up to have roughly one season per book, but now that we have five books and seven seasons of television, who knows if that still holds true. Plus, The Winds of Winter is rumored to be a massive tome, probably worth a season and a half at least.

So, despite the stark (get it?) differences between book and show, here are a few things we can guess about the next books from season seven so far:

More like this
16 Novels That Paint A Realistic Portrait Of Abortion
By K.W. Colyard
At 14, Jenny Han Wrote Rom-Coms About Her Friends & Fan Mail To Leo DiCaprio
By Alyssa Lapid
Emilia Clarke Shares More Details About The New 'Game Of Thrones' Series
By Maxine Harrison
Twitter’s Reaction To HBO’s ‘Game Of Thrones’ Jon Snow Spinoff Idea Is Chaotic
By Stephanie Topacio Long
Get Even More From Bustle — Sign Up For The Newsletter